A ‘dancing’ penguin and an owl health check: 2022 Bird Photographer of the 12 months finalists revealed 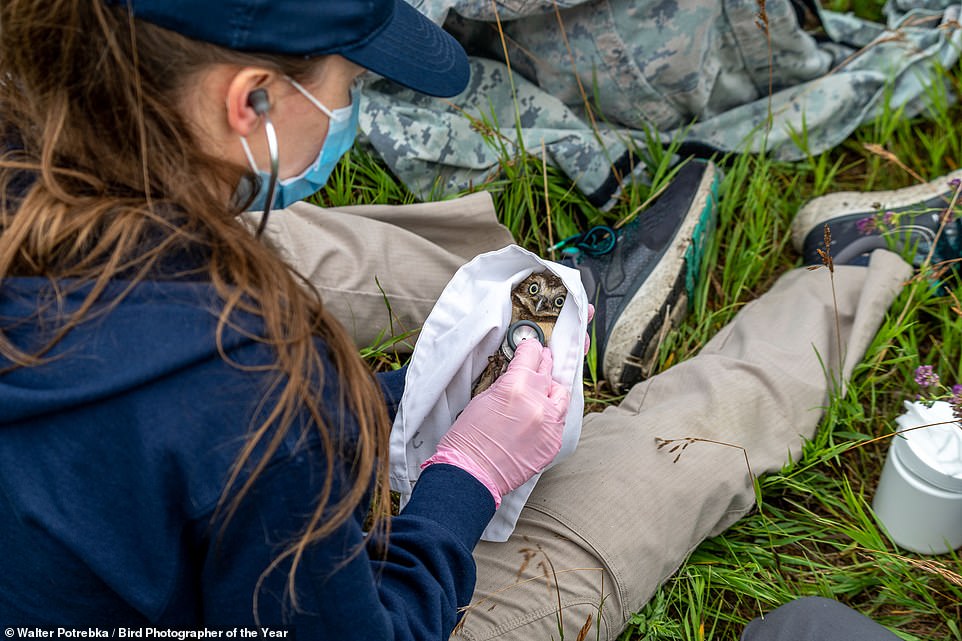 A gentoo penguin ‘dancing’ within the sunset, an incredible blue heron preying on a vole and a hummingbird feeding her nest of newborn chicks.

Photographs of those spectacular scenes have been named as finalists within the Bird Photographer of the 12 months 2022 contest, an annual award that celebrates ‘avian beauty and variety’.

Greater than 20,000 images captured by photographers from 115 different countries have been submitted to the awards this yr, with the general winner primed to take home a £5,000 money prize.

Will Nicholls, wildlife cameraman and Director at Bird Photographer of the 12 months, says: ‘We’ve seen stunning images this yr.

‘We have fun birds and conservation through images, and it’s all the time a pleasure for everybody on the judging panel to see the work of such talented photographers.’

The competition’s overall winner will probably be announced on September 8, with the winning images travelling around the globe in a touring exhibition. Scroll down for a peek at a few of the eye-opening pictures which are within the running…

This heartwarming shot – a finalist within the Conversation Award – shows a volunteer from the Manitoba Burrowing Owl Recovery Program tending to a burrowing owl within the central Canadian province of Manitoba. Canadian photographer Walter Potrebka reveals that he spent 2021 documenting the work of the recovery program, which ‘involves the reintroduction of owl pairs and young, wild owl surveys, habitat improvement and community engagement’. Potrebka explains: ‘Owls are reintroduced every breeding season, with cooperation from private landowners. Despite these efforts, previously ten years, fewer than ten nesting pairs of untamed burrowing owls have been recorded in Manitoba.’ He adds: ‘To the team’s delight, and because of a neighborhood farmer, in 2021 a wild nest was reported with six healthy owlets, which was the primary nest observed since 2011!’ 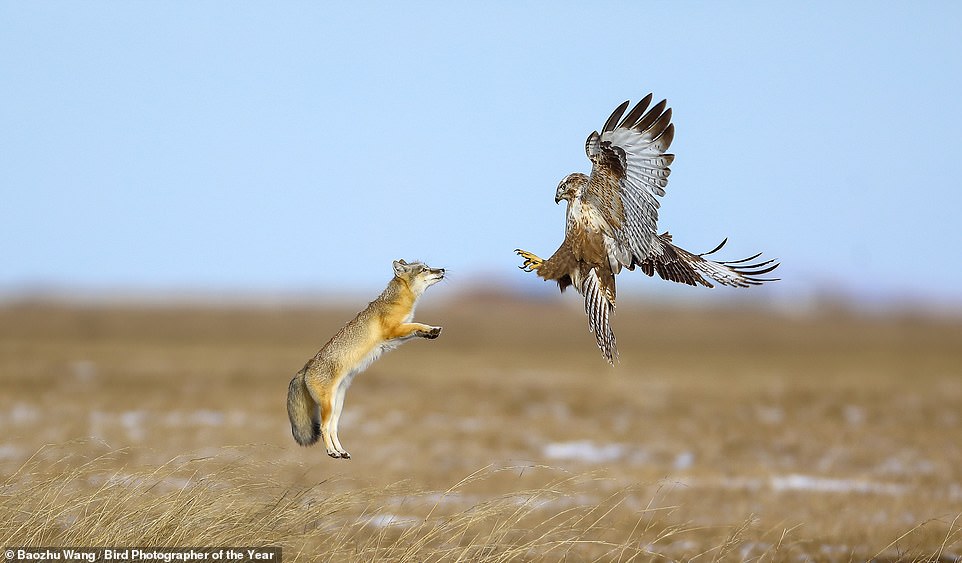 Showing a face-off between an upland buzzard and a corsac fox, this incredible photograph – a finalist within the Bird Behaviour category – was taken on the grasslands of the East Ujimqin Banner, an area within the northeast of Inner Mongolia. In keeping with Chinese photographer Baozhu Wang, who was behind the lens, each the upland buzzard and the corsac fox are ‘top predators on this grassy environment and share a eating regimen that comprises mainly small rodents’. Wang explains: ‘Consequently, when it comes to feeding they’re rivals and are sometimes driven to fight one another over food. This type of confrontation is normally for show and a battle of will that never finally ends up with life-and-death conflict.’ Wang also reveals what happened after the clicking of the shutter. ‘On this instance, the upland buzzard decided to relinquish its food and fly away,’ Wang explains 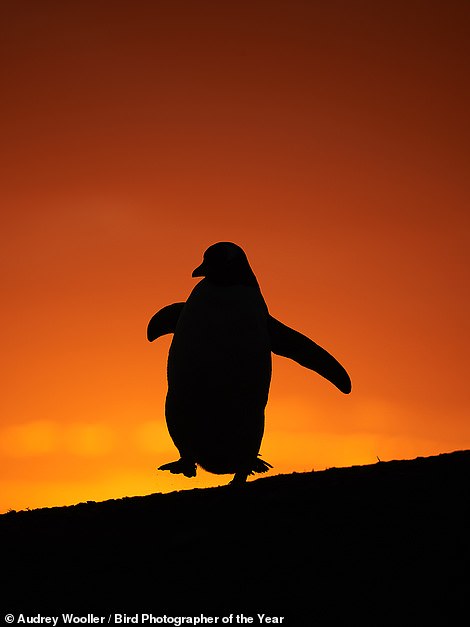 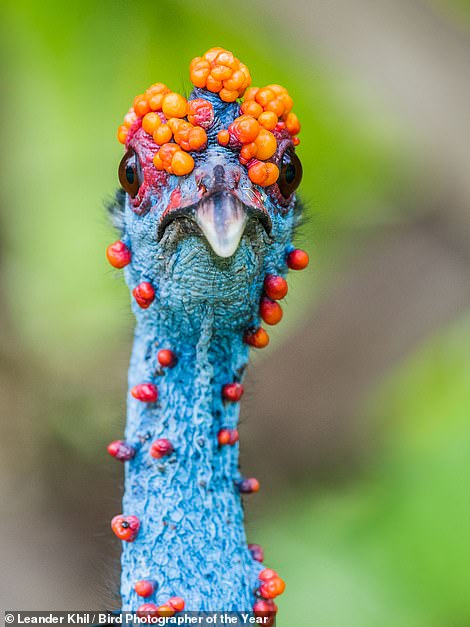 LEFT: ‘In the sunshine of the setting sun, this penguin almost looked as if it were dancing.’ So says British photographer Audrey Wooller of this lovable picture, which shows a gentoo penguin on Sea Lion Island within the Falkland Islands. Wooller continues: ‘I positioned myself lying on the bottom, waiting and hoping for an acceptable penguin to pass in the course of the couple of minutes when the setting sun created ideal light for a silhouette. This penguin obliged, with beak, feet and flippers nicely placed because it went past.’ The shot has been chosen as a finalist within the Best Portrait category. RIGHT: ‘Wart Head’ is the title given to this photograph, which is a finalist within the Best Portrait category. It shows an ocellated turkey on the grounds of Chan Chich Lodge, a conservation lodge and reserve in northern Belize. Austrian photographer Leander Khil says: ‘The colors and structures on the pinnacle of a male ocellated turkey surpass even those of its closest relative, the wild turkey (Meleagris gallopavo) of North America. I all the time ponder whether the orange warts that cover the pinnacle and neck could serve another purpose than sexual selection – they appear so extravagant.’ Khil adds that the turkey made ‘eye contact’ with him when he captured the shot 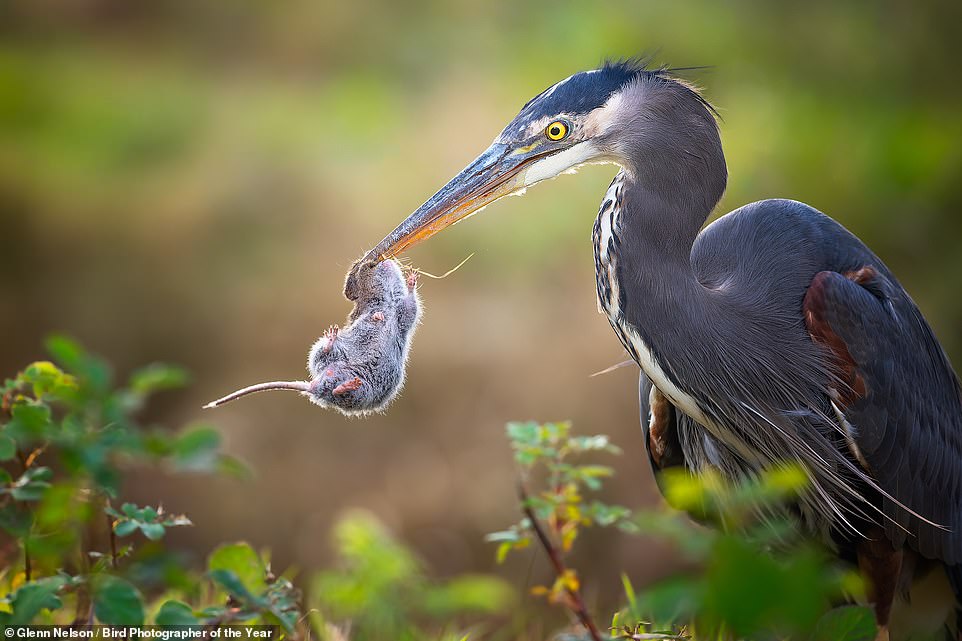 U.S photographer Glenn Nelson snared this jarring shot, which shows an incredible blue heron snatching up a vole from the bottom within the Skagit Valley region in Washington State. Recalling the day he captured the photo, Nelson explains: ‘I’d spent a very good portion of the yr photographing great blue herons, which is the official bird of my home town, Seattle. I had just taken possession of a brand-new lens and desired to try something different, so I pulled off the road to watch a heron in a field. Until that time, I had been photographing these birds exclusively within the vicinity of water. I used to be shocked when the bird pulled up a vole and I literally needed to force myself to maintain photographing.’ He adds: ‘Some will find this image too gruesome to take a look at, and the heron’s alternative of prey will come as a surprise to many. It really shouldn’t: we humans devour other mammals, in addition to birds, in any case.’ The photograph is a contender within the Bird Behaviour category 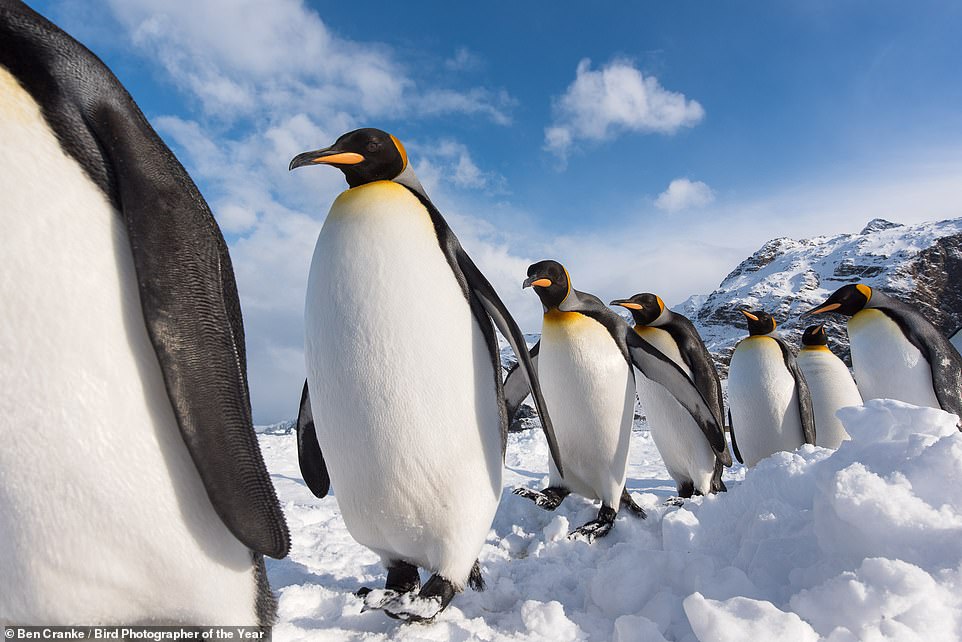 This dynamic shot, captured within the bay of Gold Harbour on the island of South Georgia, was snared by photographer Ben Cranke. ‘On land, king penguins are inclined to be creatures of habit, and when moving from the ocean to their nests they sometimes follow a well-trodden path,’ the South African photographer says of the image, which is running for a prize within the Best Portrait category. Cranke continues: ‘I took advantage of this behaviour to capture this image, hiding a camera on the sting of one among these paths and camouflaging it with snow. I used a wireless trigger to take this shot of the birds as they paraded past in orderly single file’ 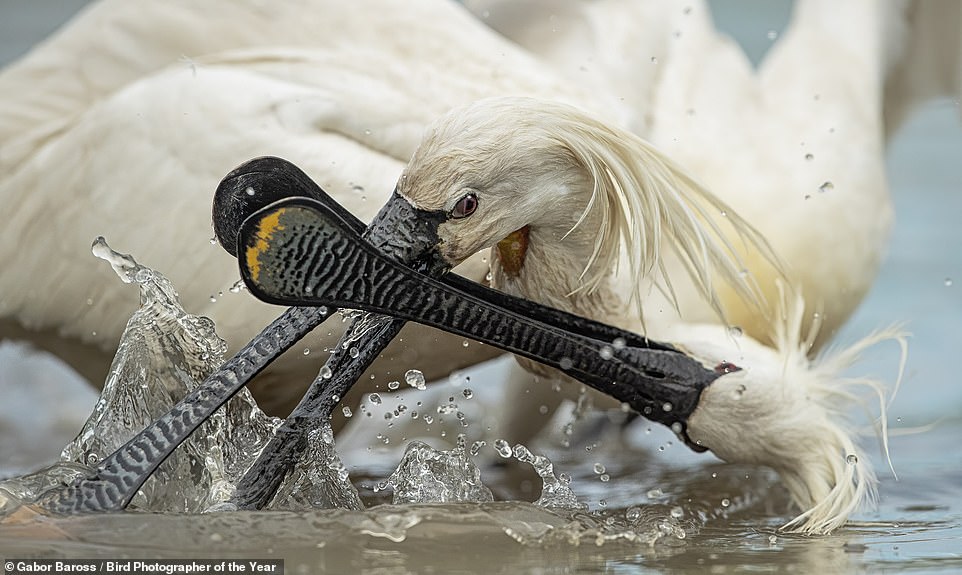 A tussle between two Eurasian spoonbills in Hortobagy National Park, a park that spans 800 km sq (308 sq miles) in eastern Hungary, is the topic of this amazing photograph. Armed together with his camera, Hungarian photographer Gabor Baross was waiting at a small pond within the park when a gaggle of Eurasian spoonbills landed beside him. ‘It was immediately noticeable that there was an aggressor amongst them, a bird that had very strong territorial instincts… within the overwhelming majority of cases, the opposite spoonbills selected to avoid confrontation. Nonetheless, in a single instance there was a bird that turned to face the aggressor and a minute of unbridled fighting began.’ Baross continues: ‘The extent of aggression the birds displayed was far beyond my imagination. I felt like they were fighting for his or her lives, as they pressed one another’s heads under the water or simply grabbed one another’s legs and didn’t let their rival fly away. Throughout the combat they were getting closer and closer to me, so by the point this picture was taken they completely filled the frame.’ The image is in with a probability of winning within the Bird Behaviour category 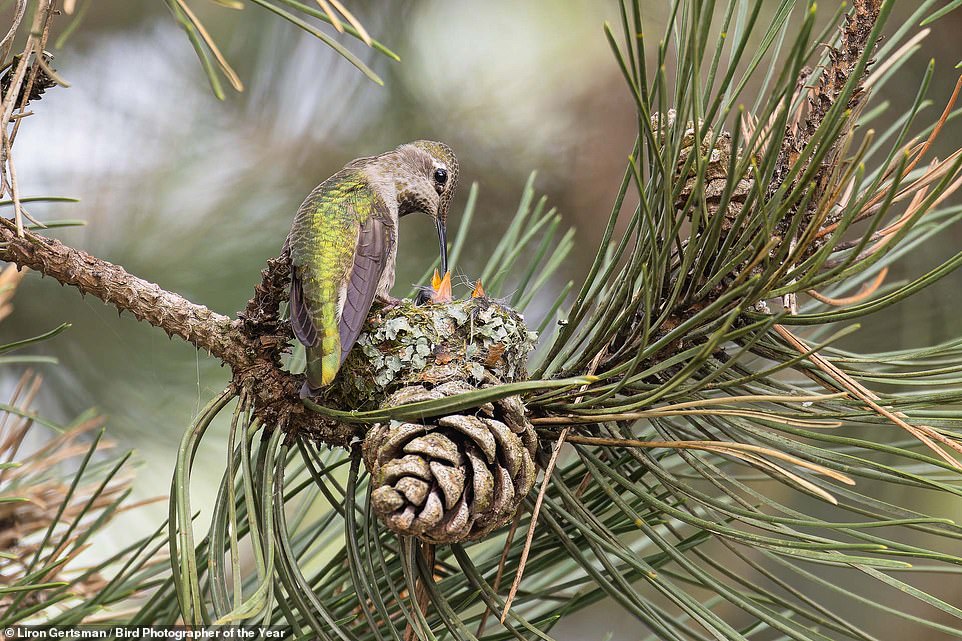 This lovable shot of an Anna’s hummingbird nest was captured in Vancouver by Canadian photographer Liron Gertsman. The image was taken in Gerstman’s local park in the course of the Covid pandemic. He says: ‘Over the course of the spring, I managed to locate seven Anna’s hummingbird nests in the realm. Not wanting to disturb the birds on this vital and sensitive stage of their life cycle, I might stay an appropriate distance from the nests and limit my visits to a maximum of quarter-hour. I had been checking in on this particularly beautiful nest for a few weeks, as a hummingbird worked hard to construct it and incubate her eggs.’ Describing the moment he secured this particular shot – which is a finalist within the Bird Behaviour category – he says: ‘I used to be delighted when I finished by one afternoon and saw two tiny beaks poking out of the tiny nest! When their mother flew in to feed them, I captured this intimate moment’ 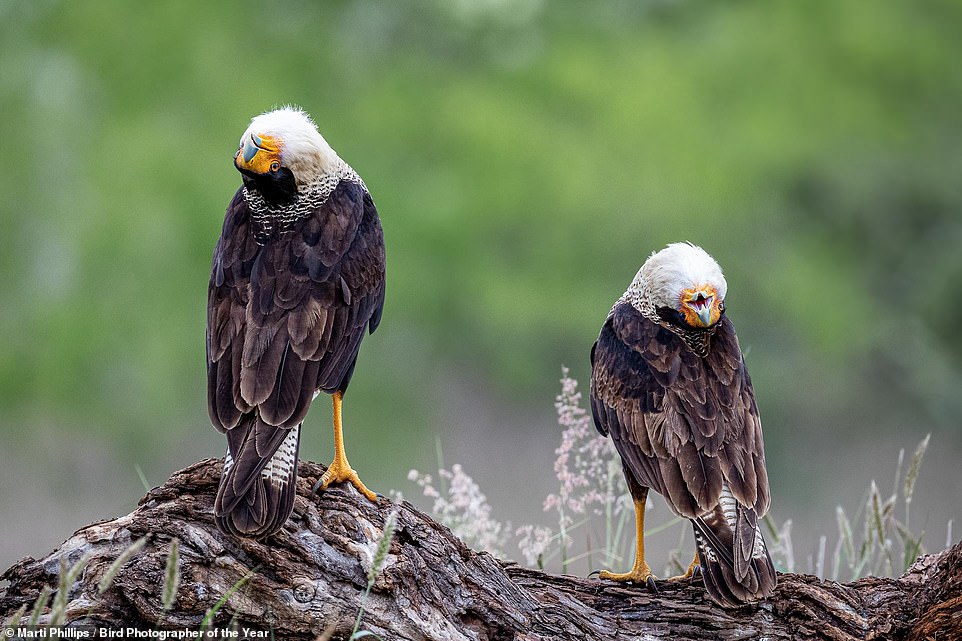 The Laguna Seca Ranch, a family-owned bird photography ranch near the town of Edinburg, Texas, is the backdrop for this fascinating picture of a pair of crested caracaras. It was captured by U.S photographer Marti Phillips, who says: ‘This image was taken from a hide where birds are fed recurrently, and among the many species attracted were crested caracaras. More often than not they simply sat around, so imagine my delight at with the ability to photograph these two individuals as they performed their mating behaviour.’ The photograph, titled ‘Head Over Heels In Love’, is a finalist within the Bird Behaviour category 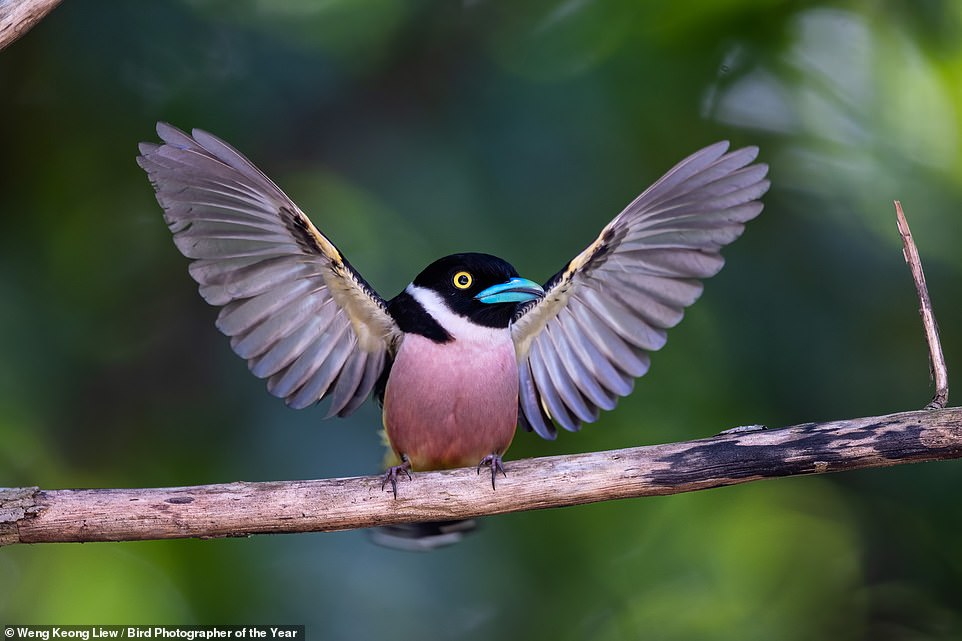 Malaysian photographer Weng Keong Liew was behind the lens for this vibrant shot, which shows a black-and-yellow broadbill in Selangor, a state on the west coast of Malaysia. ‘It was the beginning of the breeding season, and this black-and-yellow broadbill was making numerous commotion in an try to attract a mate,’ the photographer explains, adding: ‘The courtship behaviour included numerous noisy vocalisation and attention-seeking wing-spreading. To my eyes, the plumage colors and patterns are like those an artist would use as an example a cartoon – stylised and someway not quite like an actual bird.’ The image is a contender within the Best Portrait category 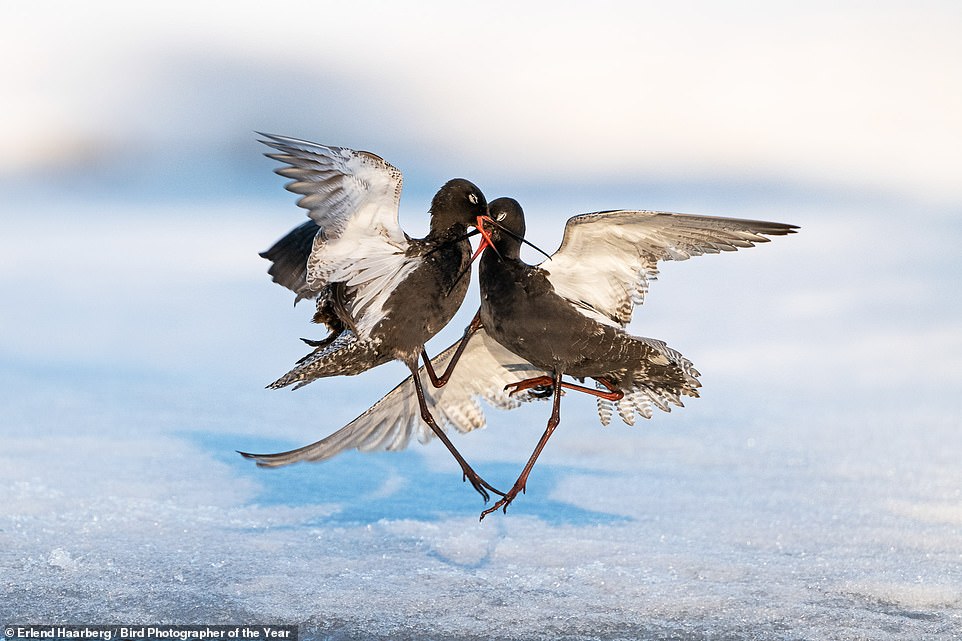 Finnmark, a county in northern Norway, was the setting for this powerful shot of two spotted redshanks caught in a fight. Recalling the build-up to the shot, Norwegian photographer Erlend Haarberg says: ‘In 2020, spring was late arriving in Finnmark and there was still numerous lingering snow when the primary migratory birds arrived. Because of this, there have been only a number of spots with open water on this particular river, and plenty of waders gathered there seeking food while they waited for the snow to melt on their nesting grounds.’ He goes on: ‘I spent several days in my hide and was capable of witness some interesting behaviour, including brutal battles between rival males, perhaps fuelled by frustration at being snowbound.’ Haarberg says that the above photograph – which is a finalist within the Bird Behaviour category – captured essentially the most ‘impressive’ battle he witnessed between birds