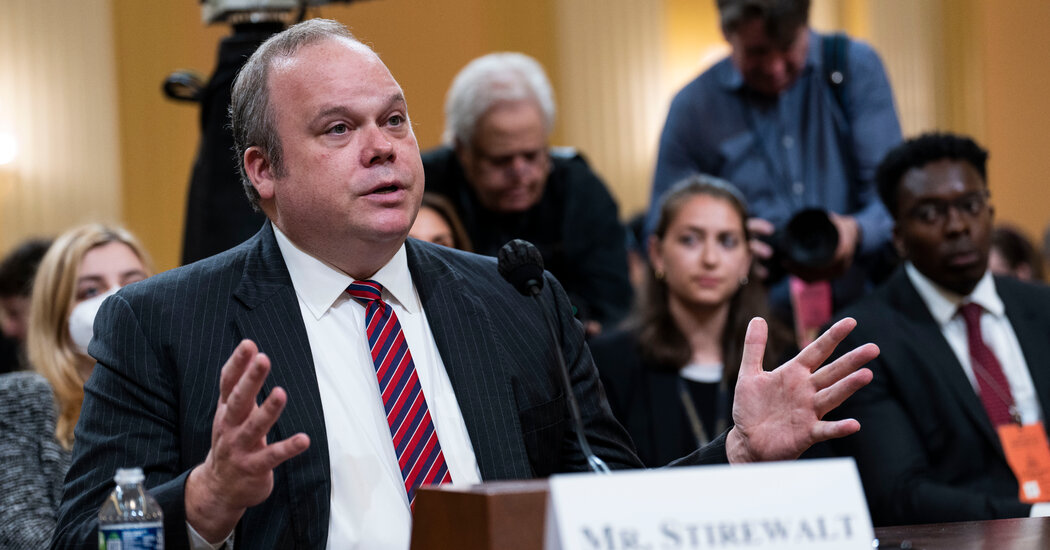 Today’s newsletter is a guest contribution by Jeremy W. Peters, who writes for The Times’s media desk. He got his hands on a forthcoming book by Chris Stirewalt, a former senior journalist at Fox News, and shares its highlights here.

After a decade at Fox News, Chris Stirewalt was suddenly shown the door in January 2021, becoming a casualty of restructuring — or, no less than, that was how Fox described his and other layoffs that swept out longtime journalists who were a part of the network’s news division.

Stirewalt, who was a part of the team at Fox News that projects election results and who testified before the House Jan. 6 committee this summer, suspects there was a much bigger reason behind his firing, which he explains in his recent book, “Broken News: Why the Media Rage Machine Divides America and How one can Fight Back,” to be released next week.

“I got canned after very vocal and really online viewers — including the then-president of the USA — became furious when our Decision Desk was the primary to project that Joe Biden would win the previous G.O.P. stronghold of Arizona in 2020,” Stirewalt writes.

Coming at 11:20 p.m., well before the opposite networks declared that Biden would win the state, the Fox call was extremely controversial and consequential. It infuriated Donald Trump and threw a wrench into his try to falsely declare himself the winner of the 2020 election. He ordered his campaign aides to demand that Fox retract the decision, to no avail.

Despite the pressure to reverse its decision, and the rankings crash Fox suffered in the following few weeks after Trump urged people to observe other networks, the network didn’t buckle since the Decision Desk analysts insisted that the information backed up their projections. They usually were right.

A spokeswoman for Fox News said, “Chris Stirewalt’s quest for relevance knows no bounds,” and disputed the concept his departure from the network had anything to do with the Arizona call. She added that Arnon Mishkin, the top of the Decision Desk, can be returning for the November midterm elections.

Stirewalt’s book is an often candid reflection on the state of political journalism and his time at Fox News, where such post-mortem assessments will not be common — either due to strict confidentiality agreements in place for workers, or the loyalty that some network insiders proceed to feel even after they’ve left.

In Stirewalt’s view, the network has played a number one role within the coarsening of American democracy and the radicalization of the best. At one point within the book, he accuses Fox of inciting “black-helicopter-level paranoia and hatred.”

He describes how, over his 11 years on the network, he witnessed Fox feeding its viewers increasingly of what they desired to hear, and little else. This sort of affirming coverage got worse through the years that Trump was president, he says, and turbocharged the response of Trump supporters once Fox called Arizona for Biden.

“Even within the 4 years because the previous presidential election, Fox viewers had turn into much more accustomed to flattery and fewer willing to listen to news that challenged their expectations,” he writes. “Me serving up green beans to viewers who had been spoon-fed ice cream sundaes for years got here as a terrible shock to their systems.”

He describes the “rage” directed at him and the remainder of the Decision Desk team, writing, “Amid the geyser of anger within the wake of the Arizona call, Senator Kevin Cramer, Republican of North Dakota, called for my firing and accused me of a ‘cover-up.’”

Stirewalt also writes: “Had viewers been given a more accurate understanding of the race over time, Trump’s loss would have been seen as a probable final result. As an alternative of understanding his narrow win in 2016 because the shocking upset that it was, viewers were told to assume that polls don’t apply (unless they were good for Trump) and that forecasters like me were going to be fallacious again.”

Stirewalt names names, taking particular aim at Tucker Carlson, the host of Fox’s highest-rated prime time show and a frequent fanner of flames within the nation’s cultural battles. He paints Carlson and Fox management as hypocrites who claim to be standing up against big corporate media despite being a part of a big corporate media enterprise.

“Carlson is wealthy and famous,” Stirewalt writes. “Yet he recurrently rails in regards to the ‘big, legacy media outlets.’ Guests denounce the ‘corporate media’ on his show and Fox’s C.E.O. calls Carlson ‘brave’ for discussing controversial topics. Yet by some means, no one even giggles.”

He adds, “It doesn’t take any sort of journalistic courage to pump out night after night exactly what your audience wants to listen to.”

Stirewalt also offers a counterintuitive tackle what Fox News ultimately wants to attain by offering content that tilts hard to the best. It’s to not elect Republicans or really even to assist them in any respect, he says.

Hosts like Sean Hannity and analysts like Dick Morris, the previous Clinton aide who became a fixture on Fox, for years propagated falsehoods to their audiences about how well Republicans were positioned to win their races, apparently aiming to juice the network’s rankings, Stirewalt writes.

“They wanted it to be true because they wanted Republicans to win,” he says, “but keeping viewers keyed up in regards to the epochal victory close at hand was an appealing incentive to exaggerate the G.O.P. possibilities. It was good for them to lift expectations, but it surely wasn’t good for the party they were rooting for.”

He adds, “Despite all that Fox’s detractors said in regards to the network being a mouthpiece for the Republican Party, the 2 organizations had fundamentally different goals.”

Stirewalt briefly reflects on what his role in all of this might need been, now that he’s been gone for a 12 months and a half. He’s now a senior fellow on the American Enterprise Institute and a columnist for The Dispatch.

“I make no pretense that I even have all the time been on the side of the angels,” he writes. “But I even have definitely paid my dues.”

What to read on democracy

Thanks for reading. We’ll see you next week.

Is there anything you’re thinking that we’re missing? Anything you ought to see more of? We’d love to listen to from you. Email us at onpolitics@nytimes.com.