A Los Angeles Hotel with a Theatrical Flair 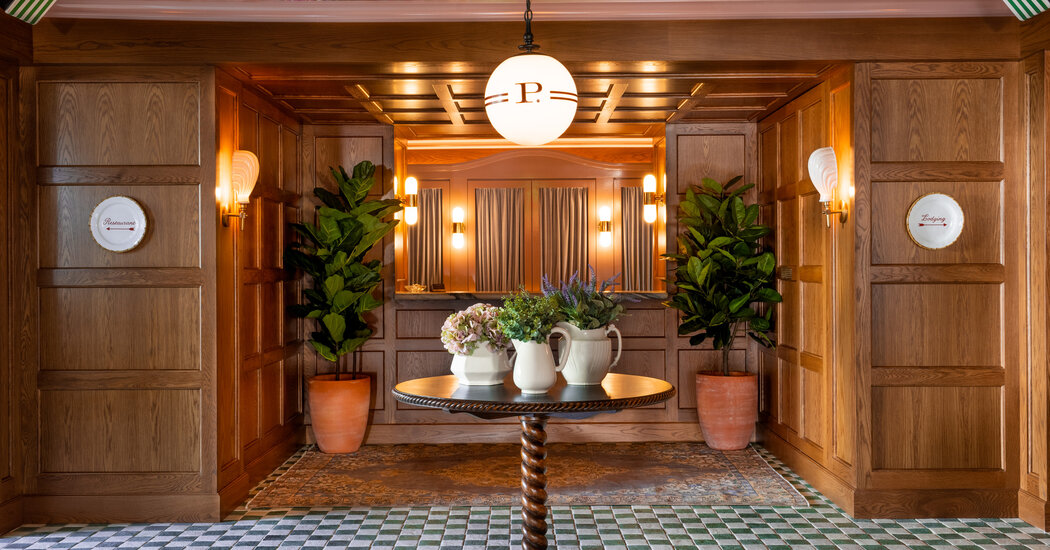 “We didn’t need to craft an area that takes itself too seriously,” says the Palisociety founder Avi Brosh of his approach to the brand’s newest property, Palihouse West Hollywood. He sought to melt the West Third Street constructing’s stark exterior with an eclectic, layered interior, taking cues from playful California luxury and the unpredictable charm of a classy European inn. There may be a theatrical feel throughout, starting with the check-in desk, which was designed to appear to be a stage with its curtains drawn. Each of the 95 rooms is adorned with antique pieces, custom lighting fixtures and artwork in abundance. And while there’s plenty to see and eat nearby — LACMA, La Brea Tar Pits and Caviar Kaspia are all a brief drive — the hotel offers its own ecosystem of entertainment. All-day California fare is served within the lobby lounge, cafe and bar; the Pool Lounge offers complimentary refreshments like lemonade and candy; and on the mezzanine floor, you’ll discover a sake bar with Japanese-fusion small plates like pressed sushi and a chicken katsu sandwich — with an accompanying late-night takeout window. Palihouse West Hollywood opens Dec. 1, rooms from $295, palisociety.com.

The Miami-based gallerist Nina Johnson first became acquainted with the multidisciplinary designer Minjae Kim last summer when she saw his work at Marta, a gallery in Los Angeles. She immediately acquired a sculptural floor lamp built of highly lacquered dark Douglas fir with a fiberglass shade. And when she decided so as to add a library space to her gallery complex in Little Haiti, all designed by Charlap Hyman & Herrero, she knew she desired to commission Kim to create furniture for it. “I wanted to indicate an artist whose work would engage with the architecture,” she explains. The Recent York-based Kim was born in Seoul and his work is usually inspired by his multicultural identity; his wood and fiberglass chairs, tables, lamps and cabinets are typically crafted using Korean techniques and are sometimes loaded with references each personal and historic. “The chair that I make can have more meaning than simply a spot to sit down,” Kim says. “I attempt to hide the indisputable fact that the objects I make have a function.” For the opening of Johnson’s library, the 33-year-old designer created an exhibition of unique pieces under the name “IYKYK” — for those who know, you recognize. To Kim it signifies that “someone with a Korean background will see one other layer.” He was inspired by ancient Asian objects that he’s been researching for years, comparable to a standard ceremonial chair and a light-weight in the form of a moon jar. “Being multicultural sometimes means you enter a realm of limitless confusion,” says Kim. “But then it does make things that rather more interesting.” “Minjae Kim: IYKYK” is on view from Nov. 28 to Jan. 7, 2023, ninajohnson.com.

At her Italian home in Cortona, a medieval hilltop town in Tuscany, Jennifer Perez Crisanti keeps a big green-flecked terra-cotta bowl in her kitchen sink. The Canadian-born founding father of Ivo Angel, a web-based store selling handmade Italian splatterware, uses it for doing the dishes. Like all good design, splatterware pottery, characterised by its rapidly applied splotches of colourful glaze, is just not only beautiful but functional: It’s durable, inexpensive and simply produced. Popularized by England’s Staffordshire potteries within the 18th century, the craft has long been practiced in Italy, and Perez Crisanti collaborates with a neighborhood master artisan, Giulio Lucarini, to make Ivo Angel’s pieces, which range from generously proportioned mixing bowls and durable water jugs to a ruffle-edged fruit stand. While working in his studio, Lucarini likes to inform stories about life in Cortona (“a few of them are quite scandalous,” Perez Crisanti says), where his family has been based for generations. She hopes the pieces, that are intended for on a regular basis use, will grow to be similarly entwined with their owners’ lives. “It’s necessary to surround ourselves,” she says, “with things which have a soul.” From $20, ivoangel.com.

The Italian designer Marco Zanini launched his women’s fashion brand Zanini in 2019 to an immediately devoted audience. Prepandemic, his collections were shown during biannual fashion weeks in his treasure-filled Milanese apartment turned salon for clients and buyers who felt like he’d created his precise tailoring and female layers only for them. It was this intimacy that made it unimaginable to maintain the small, self-funded brand afloat as Covid restrictions continued on two years later. But through the long days at home, the designer kept in contact with the buddies he’d made while producing his line. It was certainly one of these chats with Sonya Park, the founding father of the Japanese retail destination Arts & Science, that ignited his most up-to-date project. Park suggested he send his fabrics and patterns to Japan, where she would produce a capsule collection. So began a back-and-forth design project where signature Arts & Science shapes and styles were rendered within the Italian designer’s fabrics — and vice versa — like a Zanini suit cut in a Japanese-woven salt-and-pepper cashmere and a boxy, classic Arts & Science shirt constituted of a Zanini wool-and-silk checkerboard fabric. “We were like kids playing together in a sandbox,” Park says of the partnership. Zanini is giddy with excitement in regards to the experiment, considering it a “genius” way for him and other small designers to remain connected to their work. “Sonya was an inspiration for me once I launched my business, so this is basically a dream come true,” he says. The gathering is supposed to be the kickoff of a continued collaboration, officially called Zanini with Arts & Science, now available at Arts & Science stores.

Not only did the architects Karl Fournier and Olivier Marty design the celebrated Yves Saint Laurent museum in Marrakesh but, almost 20 years ago, the duo behind Studio KO also helped restore town’s legendary restaurant and meeting place, Grand Café de la Poste. They spent three years transforming the constructing for the French restaurateur couple Pierre Pirajean and Helena Paraboschi. This month, the identical team has come together again to open Sahbi Sahbi, a jewel box of a restaurant within the neighborhood of Gueliz. Inspired by traditional family recipes and built across the concept of a nonhierarchical, women-led kitchen team, Sahbi Sahbi serves Moroccan dishes like cumin-spiked lamb and tagine with chermoula-marinated sea bass. Fournier says that, just like the food, the thought behind the design was “to pay tribute to Moroccan crafts.” Quite a lot of textured surfaces — a wall of triangular tiles and carved ceilings — product of natural materials comparable to brick and cedar surround a central open kitchen, which is supposed to act as a stage for the ladies who run it. “It’s brave and difficult for girls in Morocco to work in a spot that serves alcohol,” explains Paraboschi. “They need to get several authorizations simply to be allowed to be employed here. I even have wanted for a few years to create an authentic Moroccan restaurant that honored and gave opportunity to women.” The concept appealed a lot to the 2 architects that they asked to be partners within the business, making it their first project as restaurateurs. That’s why it’s called Sahbi Sahbi, which suggests “soul mates” in Moroccan Arabic. sahbisahbi.com

Ahead of the vacations, the National Museum of the American Indian is hosting its fifteenth annual Native Art Market showcasing artists chosen by a committee of curators and cultural specialists. Within the Diker Pavilion, situated inside the grand columned museum on the southern tip of Manhattan, the Tuscarora beadwork artist Grant Jonathan will display his ornaments and the Navajo artist Melvin Platero will bring the contemporary gold and silver jewelry he creates using traditional tufa casting techniques. The group of 39 featured artists also includes the trailblazing designer Dorothy Grant, who pairs traditional Haida art with fashion design, and the renowned Diné inlay jewelry artist Jimmie Harrison. This 12 months marks the annual market’s return to an in-person event after a two-year hiatus due to Covid restrictions. (The museum’s Washington, D.C., counterpart will hold its Native Art Market at the identical time, with a distinct roster of artists.) The museum’s head of public programs, Shawn Termin (Lakota), is thrilled that this can mean more interactions between collectors and artists. “Through the close one-on-one conversations that happen between art market visitors and the artists, people can develop a deeper understanding of Native art and cultures,” she says. Museum members get first pick at a preview reception held on Dec. 2. The National Museum of the American Indian’s Native Art Market is on view Dec. 3 and Dec. 4, americanindian.si.edu.

Holiday Table Settings From Our Archive