A Monkish Conductor Who Expressed His Faith Through Music 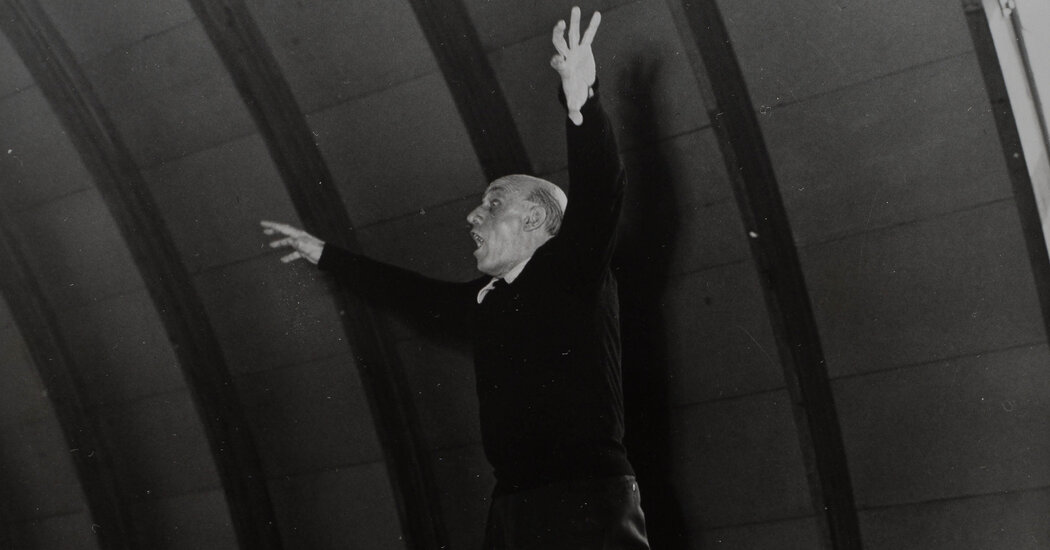 When Dimitri Mitropoulos was putting together the programs that he would conduct in 1947 as a guest of the Latest York Philharmonic — the ensemble he later led in a fraught tenure from 1949 to 1958 — he likely couldn’t have predicted which item on his typically eclectic lists can be essentially the most controversial.

One week, this “strangest and most curiously gifted” of conductors, as Olin Downes of The Latest York Times called him, preceded Gershwin’s Piano Concerto with the American premiere of Mahler’s Sixth Symphony, at a time when Mahler’s works were regarded with incredulity. The week before, Mitropoulos, the Greek American music director of the Minneapolis Symphony, had offered firsts of Bartok and Barber. Before that, he had given a Thanksgiving premiere of Krenek’s Symphony No. 4, a serial work with “about as much savor to it as a pasteboard turkey,” the critic Virgil Thomson quipped.

Yet none of that caused the caustic ire reserved for Strauss’s “Alpine Symphony.” “A composer can be a little bit embarrassed to admit to the authorship of a rating like this today,” Downes railed after the Philharmonic concert on Nov. 20, joking that only an atomic bomb had been unnoticed of its “sensational and expensive sounds.” If the parting of Strauss’s thunderstorm was “mellifluous,” he admitted, it was still “sentimental in essentially the most bourgeois vein,” music “from which one would have expected Mr. Mitropoulos long since to have graduated.”

Even so, the “Alpine Symphony” was the sort of gospel that Mitropoulos, a missionary for brand spanking new and underappreciated music whose hair-shirt devotion and tall, bald figure evoked the monks he had considered joining as a boy, could preach aflame in inspiration. Take heed to a Philharmonic broadcast from Nov. 23, and also you hear a Strauss not of banality but spirituality; what Downes dismissed as mawkish, Mitropoulos conducts as rapture.

Conducting was a calling for Mitropoulos, an alpinist who felt closest to God within the mountains but expressed his faith enduring trials of music. His aim, he wrote to his muse, Katy Katsoyanis, in 1947, was “to surpass the fabric, to annihilate it, reduce it to nothing, in order that the spiritual achievement becomes an absolute morality.” It was also carnal, an act of metaphysical love between conductor and orchestra that this largely celibate gay man, as his exemplary biographer William R. Trotter portrays him, saw as “one other expression of my unlived sexual life.”

Painstakingly committing the tiniest details of scores to memory, Mitropoulos seemed to not direct music but to emanate and embody it, fists flailing and feet flying. He was, on principle, a collaborator, one who worshiped the charitable example of St. Francis of Assisi and refused to wield a baton, which he saw as a logo of subjugation. But his ability to unify gesture and tone paradoxically appeared imperious to some, even authoritarian, a denial of spontaneity and specificity of fashion.

Either way, if Mitropoulos’s detractors granted that his erratic interpretations, driven tempos and taut, sinewy sound served some music spectacularly well, ministering to the downtrodden of the world’s (male) composers was not what his times demanded.

“Mr. Mitropoulos conducts the flawed pieces magnificently,” Thomson surmised after his Philharmonic debut, in 1940; a repute for coarseness within the canon of Mozart, Beethoven and Brahms would undo him when Latest York critics sought blood over a decade later.

The stature of “essentially the most masterful of all modern conductors,” because the critic Neville Cardus anointed him, has since wilted within the egotistical heat solid by his erstwhile protégé, constant betrayer and eventual successor: Leonard Bernstein.

A recent, 69-disc Sony Classical box of Mitropoulos’s recordings might grant a possibility to reassess the conductor, but when there’s far too little of what Thomson considered the “right” music to be heard in it, there’s hardly enough of the “flawed” music to challenge the standard wisdom either. The real Mitropoulos stays frustratingly out of reach.

Sony will not be at fault here. Releasing lots of Mitropoulos’s recordings for the primary time within the digital era, it has filled the last gaping hole within the discography of the Philharmonic’s post-Toscanini many years. The blame lies with the label that recorded Mitropoulos for much of his profession, Columbia, whose executives selected Eugene Ormandy over interpretive insight and stuck Mitropoulos with the leftovers, deploying him as a concerto accompanist and offering him scant probability to meet his mission. The choice was business; the pity is lasting.

Mitropoulos was born in Athens in 1896. He was young when he began to check piano; soon enough, if he wasn’t joining his uncles to wish within the monasteries of Mount Athos, he was spending his Saturdays leading scratch ensembles at home. On the Athens Conservatory, he trained as a keyboard virtuoso of firebrand talents and as a composer of Romantic tastes. Aside from some transcriptions, he rarely performed his own works afterward, but he made his podium debut in 1915 along with his tone poem “Tafi” (“Burial”).

After a transient spell in Brussels, Mitropoulos went to Berlin to check composition with Ferruccio Busoni, then worked as an assistant conductor on the State Opera there. However the modernist impulses he got here to feel in Weimar-era Berlin, influencing each his inclinations within the repertory and his formidable last compositions, were of little use back in Greece, where duty bade him return in 1924 to guide the Conservatory Orchestra in Athens, a poor ensemble he became a listenable one.

His breakthrough got here in 1930, when one in every of his patrons hired the Berlin Philharmonic for him to conduct a concert: After Egon Petri withdrew from Prokofiev’s Third Piano Concerto, Mitropoulos took up the solo part as well. Repeating that shocking display of musical ability elsewhere drew the eye of Serge Koussevitzky, the Boston Symphony Orchestra’s director, who invited him to be a guest conductor. Upon that debut, in 1936, the Boston Herald said that “his body, even greater than the notes of the rating, seems the source of the music.” Critics gossiped of finding Toscanini’s heir.

When Mitropoulos returned to Boston in January 1937, he added a date with the Minneapolis Symphony, now the Minnesota Orchestra, which Ormandy had jilted for Philadelphia the 12 months before. “Mitropoulos seemed to be a fanatic who had sold his soul to music” wrote a neighborhood critic, who described conducting “so stuffed with blood, muscle, and nerves as to appear alive and sentient.” Mitropoulos was announced because the music director inside a few weeks, and would stay for 12 years.

Mitropoulos’s stint within the Twin Cities was radical in greater than just repertoire, difficult the godlike halo of other conductors along with his asceticism. He lived in dorm rooms on the University of Minnesota. Spending on little but his habit of catching a double feature, he gave his salary away, much of it to the players whose privations he shared on limitless tours. His sexuality remained private, the closet one act of discipline amongst many; the summer of 1943 was spent doing exhausting manual labor for the Red Cross.

There have been tribulations within the music to which Mitropoulos exposed his listeners within the five-thousand-seat Northrop Auditorium, too. Alongside recent music from Rachmaninoff and Vaughan Williams got here the dissonances of Schoenberg, Krenek and Artur Schnabel, the pianist whose First Symphony even Milton Babbitt described as “murderously complex” after hearing Mitropoulos’s unhappy performance of it in 1946.

The Minneapolis recordings in Sony’s box give no more hint of such ambition than a pioneering Mahler Symphony No. 1. Mitropoulos chafed on the early recording process, but his style is audible through dismal sound. Dynamics are extreme, and accents are firm. If his Schumann Second suffers from his wrestling, Beethoven’s “Pastoral” — the one one in every of that composer’s symphonies that he recorded — sounds aptly brawny today. And his burly rhythmic insistence makes unexpected triumphs of Franck’s Symphony and Rachmaninoff’s “The Isle of the Dead.”

The query was never whether Mitropoulos would depart Minneapolis, but for which ensemble and when. He took charge of the Philadelphia Orchestra’s summer live shows from 1945 to 1948, but Ormandy proved immovable. Boston looked likely until Koussevitzky’s homophobia — abetted by the ambitious Bernstein’s evident outing of Mitropoulos, his youthful crush, to his recent mentor — ended that path. The last orchestra standing was the Latest York Philharmonic, an overworked, underpaid orchestra with a fearsome repute.

“I even have to go,” Mitropoulos told his Minneapolis concertmaster, Louis Krasner, “though I do know I’m probably going to my doom.”

Doom awaited, although there was success before the autumn. The repertoire was again catholic, ambitious, brilliantly dangerous. His “Elektra” and “Wozzeck” were historic. Loads of Schoenberg’s scores received hearings; difficulties rehearsing the monodrama “Erwartung” led Mitropoulos to ask Katsoyanis whether his compulsion for “distorted and screwy beauty” was just an “egotistical occupation” with “the pleasure of self-destruction.” It almost was after Milhaud’s colossally difficult “Christophe Colomb” humiliated him in November 1952. He had a heart attack inside weeks.

Mitropoulos never drew the loyalty from the Philharmonic that he had secured in Minneapolis; the players took advantage of his financial generosity or publicly threw their parts of a Webern work at his feet. Snide remarks about his private sexuality were common, and Bernstein gossiped conspiratorially that it was flawed for a bachelor to carry such a post. Mitropoulos was reduced to tears before the orchestra’s hostility. Trotter writes that this saintly figure once grew so exasperated that he threatened the players with the tyranny of George Szell.

The usual account is that standards plummeted, that Mitropoulos’s fervent intensity inevitably generated rough playing; The Times remarked in 1955 that it was “a sin to let the Philharmonic play like this.” That decline will not be wholly apparent in Sony’s box, though in Prokofiev’s “Romeo and Juliet,” amongst other works, there are moments of horrifying playing.

Dig through the criminal variety of concertos — few of them as invaluable as Shostakovich’s Violin Concerto No. 1 with David Oistrakh — and there are worthwhile records to be heard: consuming Mendelssohn; fierce accounts of Shostakovich’s Fifth and Tenth; an astonishingly brutal Vaughan Williams Fourth, Mitropoulos’s most exhilarating recording. Of Strauss, there is simply a drained excerpt from “Salome.” For Mahler, you should turn to his stunning broadcasts, above all a Sixth from 1955.

Whilst critics lauded Mitropoulos’s appearances with the Metropolitan Opera — his recording of Barber’s “Vanessa” from 1958 is gorgeous — they made him a scapegoat as they demanded the tip of a dreary era within the Philharmonic’s history, dating back to Toscanini’s departure in 1936.

“The Philharmonic—What’s Mistaken With It and Why” ran a Times headline on April 29, 1956, because the critic Howard Taubman savaged its deterioration. Bernstein was announced as co-conductor for the 1957-58 season that October; it will be Mitropoulos’s last, though he returned for a Mahler Festival in 1960, while Bernstein began to make the most of the repertory path he had blazed.

By then, Mitropoulos was working himself into the grave after one other massive heart attack. His last concert was in Cologne, Germany, a Mahler Third whose finale has an irradiant glow. He died as he sought to, falling from on high — not from a mountain, but from the rostrum in Milan, on Nov. 2, 1960. He was 64.