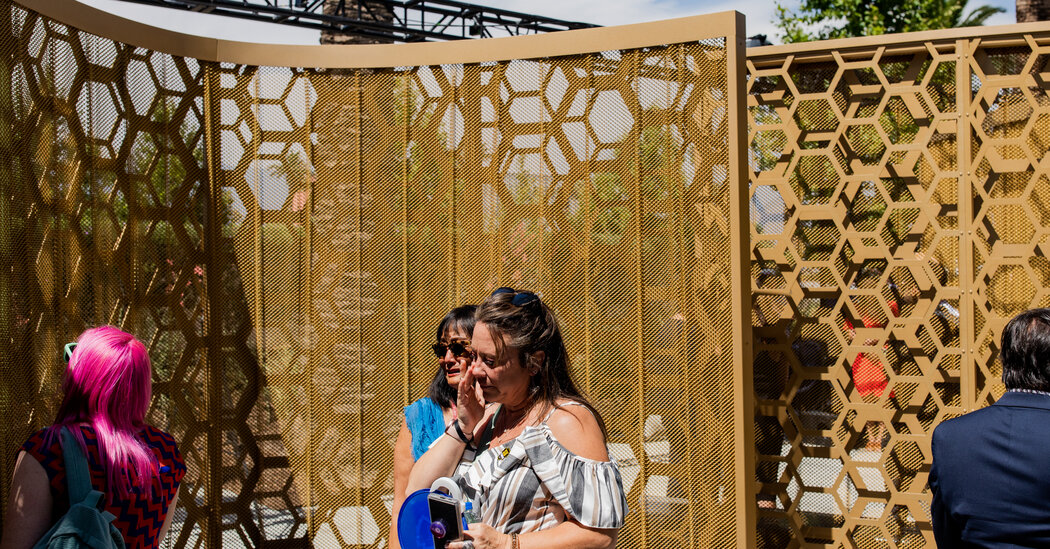 Sandra Mendoza picked a forest green panel to recall the S.U.V. her husband, Juan Espinoza, a automotive aficionado and restorer, proudly purchased before his life was taken.

Trenna Meins selected the phrase “Embrace the chances” to carve on a bench because her husband of 36 years, Damian Meins, was “at all times game for anything.”

Shannon Johnson, a county health inspector who died shielding a co-worker, is memorialized in an alcove bearing his searing last words: “I got you. Lord, have mercy.”

If design is a window on the culture, perhaps there may be nothing more revealing than the Curtain of Courage Memorial unveiled last week in San Bernardino, Calif., a sculptural ribbon of patterned bronze and steel meant to enfold the Mendozas, Meinses and Johnsons, among the many families who lost 14 family members killed in a mass shooting in 2015, in its sinuous communal embrace.

“We didn’t need a place of sorrow, but of sunshine,” said the landscape designer and artist Walter Hood, who thought in regards to the solace of cathedral chapels in his first work commemorating individuals lost to gun violence, and the survivors.

The opening of the Curtain comes on the unrelenting heels of recent mass shootings in Buffalo, N.Y., Uvalde, Texas, Orange, Calif., Indianapolis, Ind., Oxford, Mich. — and a phalanx of everlasting memorials in progress has been spawned by the deaths. These reflect “a component of the cultural landscape wherein violence is overtaking the general public realm, with a lack of life from city to city,” said Hood, a MacArthur fellow and a professor on the College of Environmental Design on the University of California, Berkeley. In 2021 alone, there was a mean of multiple energetic shooter attack per week, wherein a number of shooters killed or attempted to kill multiple unrelated people.

The curving layers of chain in the brand new memorial are intended to evoke bulletproof vests. Near the worker entrance to the County Government Center, the $2.3 million work, paid for by the county, is the denouement of a community design process that began just months after the terrorist attack on Dec. 2, 2015, which also left 21 wounded when a radicalized couple with semiautomatic weapons burst right into a San Bernardino County Environmental Health Services staff meeting on the Inland Regional Center.

Without delay private and non-private, the memorial consists of 14 alcoves representing each family’s loss in addition to the community’s collective strength. The spaces were personalized to reflect the spirit of the slain, starting with the glass panels inserted into every area of interest that solid light and shadows in the style of stained glass. A fitting quote is inscribed on concrete benches, which also contain hidden keepsakes chosen by the families.

Mendoza included a picture of a miniature hot rod and a family photo plucked from her husband’s wallet, encased in a resin cube.

Tina Meins, the daughter of Trenna and Damian Meins, recalled traveling to Angkor Wat in Cambodia and eating street food together in Vietnam. “If people go to the alcove, they’ll know who my dad was and why he mattered,” Tina said.

The facility of memory within the landscape has been a longstanding preoccupation of Hood’s, from a vertical sculpture at Princeton University representing positive and negative points of Woodrow Wilson’s legacy to Hood’s landscape for the International African American Museum, now under construction in Charleston, S.C., that recalls the enslaved Africans packed into the holds of ships and trafficked and warehoused on the location at Gadsden’s Wharf.

Designing for families tormented by gun violence was “quite a heavy burden,” Hood told the Dec. 2 Memorial Committee, which included survivors, emergency medical staff and public and behavioral health experts. “He gave each victim thought,” said Josie Gonzales, the committee’s chair and a retired county supervisor.

It didn’t take Gonzales and her colleagues long to comprehend that there have been quite a few communities from which to hunt advice. They traveled to Aurora, Colo., for the dedication of a sculpture of flying cranes honoring the 13 dead and 70 wounded within the July 20, 2012, shooting at a movie show. (Likewise, the chair of Aurora’s 7/20 Memorial Foundation attended last week’s ceremony in San Bernardino.)

“We know the way one another is feeling,” said Felisa Cardona, a county public information officer. “It’s a really sad kinship.”

The variety of memorials across the country is “innumerable,” said Paul M. Farber, director and co-founder of the Monument Lab, a Philadelphia-based nonprofit public art and history studio. “For each official site of memory coping with gun violence,” he said, “there are the unofficial places, from T-shirts inscribed with names of gun violence victims placed outside churches to young people memorializing their friends on Instagram.”

Homegrown memorials may speak volumes. Brandon and Heather O’Neill, of Richardson, Texas, arrange 19 maroon school backpacks on their front lawn, in rows resembling a category photo, with two larger packs to represent the teachers who lost their lives at Robb Elementary School in Uvalde.

The outpourings of flowers, wreaths and stuffed animals after mass tragedies are joined by artists wanting to contribute. “You are feeling helpless,” said Abel Ortiz-Acosta, an artist and the owner of Art Lab Gallery in Uvalde. With the nonprofit Mas Cultura in Austin, he’s within the midst of enlisting artists from across Texas to take part in “the 21 Mural project” to create portraits of the 19 children and a pair of teachers massacred at Robb Elementary School last month.

Michael Murphy, the founding principal and executive director of MASS Design Group, was prompted to tackle the difficulty of gun violence in the course of the opening of the National Memorial for Peace and Justice in Montgomery, Ala., where he met Pamela Bosley and Annette Nance-Holt, two activist moms from Chicago who had each lost sons to random shootings and told Murphy there needs to be a memorial to their children. “I started to ask the query, ‘What wouldn’t it be wish to memorialize an epidemic that we’re in the course of?’” he said.

The result’s the Gun Violence Memorial Project, now on view at the National Constructing Museum in Washington, D.C., at the side of “Justice Is Beauty: The Work of MASS Design Group.” Initially exhibited in Chicago, the design — a partnership with the artist Hank Willis Thomas and two gun violence prevention organizations — consists of 4 houses built out of 700 glass bricks, each brick representing the typical variety of American lives lost to gun violence in a given week. The project was inspired by the participatory nature of the AIDS quilt, with each brick a see-through repository for mementos — a whole bunch contributed by families nationwide.

“People want to present something of themselves to attach with someone lost,” Murphy said. “It’s a revelatory human act.” The project seeks to spark a dialogue a few everlasting national memorial to gun violence victims.

The San Bernardino memorial has reached fruition, but in other traumatized communities the duty continues. Nearly 10 years after 20 first graders and 6 educators were killed at Sandy Hook Elementary School in Newtown, Conn., on Dec. 14, 2012, a $3.7 million memorial is nearing completion, including “sacred soil” from the hundreds of flowers, letters, signs and photos that were eventually removed and cremated. It has been a protracted and emotionally fraught process. “People were upset about all the pieces and anything,” said Daniel Krauss, chair of the Sandy Hook Everlasting Memorial Commission.

Set in a forest clearing near the rebuilt elementary school and surrounded by flowering dogwoods, the design is meant to be “a walking meditation in a spiral” around a central body of water, with the victims’ names carved in granite, said the landscape architect Daniel Affleck of SWA Group. The memorial will open first to families after which more widely on the tenth anniversary of the massacre.

The staggering list features a third commemoration of the 23 people killed on the El Paso Walmart on Aug. 3, 2019, this one by the artist Albert (Tino) Ortega and commissioned by the town, and the architect Daniel Libeskind’s reimagining of the Tree of Life Synagogue in Pittsburgh, incorporating a recent sanctuary, a memorial, a museum and an antisemitism center beneath a “Path of Light” skylight zigzagging its way across the structure’s length. The Vegas Strong Resiliency Center, a trauma support network established after the mass shooting on the Route 91 Harvest Festival that killed 58 people and left at the very least 413 wounded, is collaborating with county and state officials on a memorial on the venue site.

“It’s rare to be a part of a project that can be here on Earth once we’re now not here,” said 26-year-old Karessa Royce, who was 22 when she sustained a critical gunshot wound and had subsequent surgeries to remove shrapnel from her throat and spine.

Essentially the most ambitious stands out as the onePULSE Foundation’s plans for a $45 million National Pulse Memorial and Museum at the location of the gay nightclub where 49 people died and 53 were wounded, the deadliest L.G.B.T.Q. attack in U.S. history. The design, by Coldefy & Associés, a firm based in Lille, France, brings to mind Oscar Niemeyer’s Brasília. It is basically a district, with a reflecting pond, garden and parabolic cover across the nightclub site, which was designated a National Memorial last yr. The concept also encompasses a blocks-long “Survivor’s Walk” and a six-story museum. The plans have spawned a Coalition Against the Pulse Museum, which, amongst many issues, objects to “turning a mass shooting right into a tourist attraction” — including “remembrance merchandise” currently on the market.

As Congress struggles to eke out a bipartisan deal on gun safety, these sobering monuments show no signs of abating. On the Mother Emanuel AME Church in Charleston, S.C., where a white supremacist gunned down nine Black parishioners during Bible study, the architect Michael Arad — who describes his contemplative waterfalls and pools within the footprints of the Twin Towers on the 9/11 Memorial as “absence made visible” — has been absorbed with a memorial to the “Emanuel Nine.”

But before ideas for courtyards, gardens or Fellowship benches shaped like angel’s wings were even discussed, Arad, the Israeli American partner of Handel Architects, was asked about his understanding of forgiveness — an echo of the sentiment expressed by church members that stunned and impressed the nation in the course of the bond hearing for the shooter, Dylann Roof. (Roof was ultimately sentenced to death.)

The reconceived grounds can be a spot to grieve, to rejoice resiliency and to assist others learn by the instance set by the families of those killed within the racist attack, offering the potential of transformation. The Rev. Eric S.C. Manning, the church’s senior pastor, said: “I pray that no matter where we were once we come into the space, we are able to leave otherwise.”

In San Bernardino, Robert Velasco, who lost his 27-year-old daughter, Yvette, put it one other way. “It was a really emotional time,” he said of that December day. “It still is.”