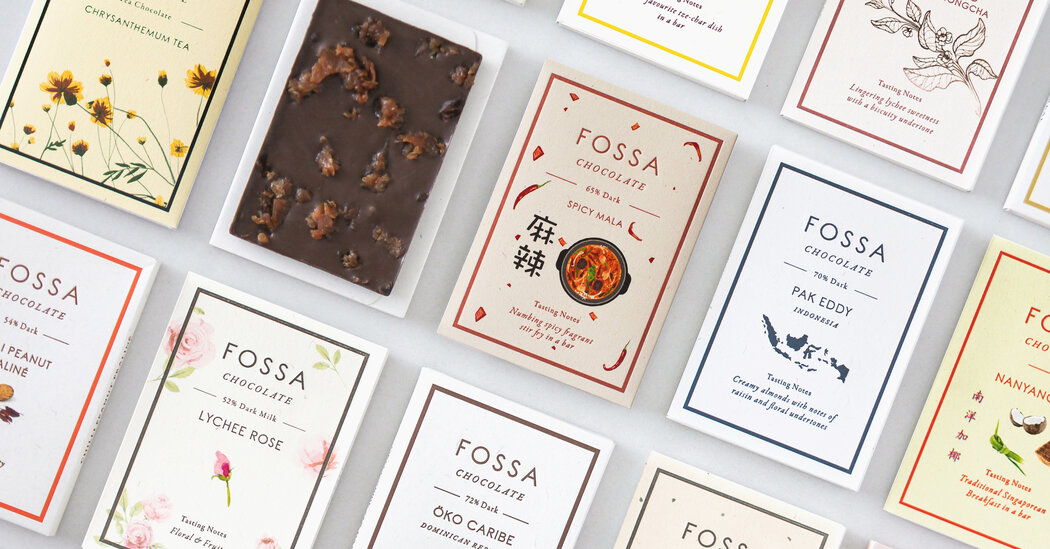 Welcome to the T List, a newsletter from the editors of T Magazine. Each week, we share things we’re eating, wearing, listening to or coveting now. Enroll here to search out us in your inbox every Wednesday. And you’ll be able to at all times reach us at tlist@nytimes.com.

A Tribeca Hotel With a French Frame of Mind

100 and ten years after François André Barrière founded his namesake hotel management group, the corporate — known for its luxury lodgings and casinos throughout France — is opening its first hotel in the US, on a cobblestone block in TriBeCa with 325 feet of street-level frontage. To fuse the hotel group’s French style with its recent location across the Atlantic, the team tapped Swedish interior designer Martin Brudnizki. Fouquet’s Latest York’s lobby takes cues from the Art Deco movement, a natural aesthetic bridge between Latest York and Paris, evident within the jewel-like beveled glass lining the front desk, behind which a wall-sized chrome panel by the Israeli American artist Nir Hod reflects passers-by on Desbrosses Street outside. While all of the guest rooms have a color scheme that feels drawn from a box of macarons, with pleated silk curtains and accents of pistachio and lilac, some also feature custom toile de Jouy wallpaper comprising Latest York City landmarks and pigeons carrying croissants. A subterranean spa offers an intensive menu of treatments in addition to a Hydropool hot tub, sauna and steam room. An outpost of the Parisian brasserie Fouquet’s, which can open in the approaching weeks, anchors the hotel’s food options with a menu created by Pierre Gagnaire in collaboration with executive chef Philippe Orrico, serving such classics as lobster thermidor and crêpes suzette. The unique Fouquet’s on the Champs-Élysées can also be known for hosting a gala dinner following the annual César awards. Echoing this tradition, the Latest York hotel has an acoustically insulated screening room that seats 100 — a fitting addition to a neighborhood that has a storied film tradition of its own. From $1,100, hotelsbarriere.com.

On this planet of craft chocolate, there are hierarchies of taste. At the highest are bars made mostly of cacao, more bitter than sweet, while somewhere below is the lushness of butterfat-enriched milk chocolate. But for Fossa, an independent chocolate maker based in Singapore, these constructs don’t apply. “We is not going to restrict ourselves within the sort of base chocolate, whether it’s dark, milk, or blond,” says the corporate’s co-founder Yilina Leong. “What’s most vital to us is how we are able to create flavor.” Each bar — made using premium, specialty cacao from various direct-trade farms around the globe — is designed to spotlight advantageous and rare ingredients or the founders’ latest culinary muse. Recent seasonings include Pekoe & Imp Chinese teas; seaweed from Tokushima prefecture, in Japan; and toasted curry leaves. “We use chocolate as a canvas to present these flavors,” says Leong. Fossa’s most up-to-date collection is inspired by the comfort foods of Singapore and the chocolatier’s newest bar takes its cue from satay, a ubiquitous street food, and its accompanying peanut sauce. The satay sauce bar, which is 48 percent cacao — so, technically a milk chocolate — incorporates peanut praline, cumin, fennel and other spices. It’s paired with ethically sourced cacao from the Kokoa Kamili fermentary in Tanzania, which has a slight green apple profile and a smooth, creamy texture that balances the toasted, nutty sweetness and faint thrum of woody spices. From $10, fossachocolate.com.

Textured Paintings Made in Marrakesh

Lrnce, Laurence Leenaert’s line of ceramics, rugs and textiles made in collaboration with Moroccan artisans, took off soon after she moved from her native Belgium to Marrakesh in 2015. But while she derived much satisfaction from creating her wares, she wanted something that was only for her, so she began painting. Like her other works, her canvases are abstract takes on the sights of her adopted city and have off-white backgrounds with free-form lines and shapes rendered in cheerful shades. They remained only for her until Freddie Burness, the director of London’s Cadogan Gallery, got a have a look at them, and the artist’s third show on the space is up now. As ever, the included works reflect Leenaert’s fascination with process and materials. She starts by collecting handwoven fabrics, which she cuts up, reassembles and stitches directly onto the canvas. This time around, she experimented with incorporating moodier colours and with using terra-cotta clay as paint, working on the ground and applying it together with her fingers. “It’s not concerning the paintings but the probabilities, they usually’re limitless here,” says Leenaert, whose favorite of the pieces is titled “Route Étroite” (2022) and depicts, she says, “all of the little roads of the town’s medina and all of the little things that catch your eye as you’re finding your way.” “Laurence Leenaert: Argile et Rêves” is on view through Oct. 8, cadogangallery.com.

While a few of us joked that quarantines were turning us into bread-baking hausfraus or driving us insane, video artist Mika Rottenberg was serious about “Jeanne Dielman, 23, Quai du Commerce, 1080 Bruxelles” (1975), the Chantal Akerman film a couple of hausfrau who’s driven insane. For her first feature film, co-created with Mayhad Tousi, which debuts next month at Latest York Film Festival, Rottenberg replaces the repressed widow protagonist with Unoaku (Okwui Okpokwasili), a profession woman confined due to an offscreen, future pandemic. The drab interiors of postwar Belgium have been recast with Afrofuturist wallpaper, and delivery drones hum on the windows as Unoaku peels her own sad potatoes. Rottenberg’s surreal videos have routinely revealed the strangeness of our labor, showing how pearls are seeded in oysters (“NoNoseKnows,” 2015) or potatoes are scraped from the bottom (“Spaghetti Blockchain,” 2019). In “Distant,” she and Tousi reveal the peculiarities of our lockdowns amongst screens, an idea Rottenberg says they cooked up as they spoke about “the strange experience of traveling so easily through the World Wide Web while being physically stuck in a single place.” Unoaku spends her days tapping a screen that, to the viewer, is completely invisible — as inconceivable to see because the products of our work under lockdown sometimes looked as if it would feel. “Distant” is on view Oct. 12 on the Francesca Beale Theater and Oct. 13 on the Howard Gilman Theater, filmlinc.org.

“The surreal dimensions are shocking,” the architect Stephen Hull once wrote of Casa Malaparte, an austere, improbable hulk of a villa perched on a craggy promontory of Capri’s eastern coast. Commissioned by Curzio Malaparte — a pseudonym for the Italian author, editor, avant-gardist and fascist turned communist Kurt Erich Suckert — the 1941 house is a multifaceted portrait of its owner, wrought from the wind-battered limestone of its lonely surroundings. Its rooftop doubles as a trapezoidal staircase to the heavens. Its exterior partitions, once white, were repainted at the tip of World War II to vermilion, the colour of blood. Malaparte tinkered with the villa’s original design, by the architect Adalberto Libera, until its structure resembled something between a beached cruise ship and a grand mausoleum.

The author’s youngest descendant, Tommaso Rositani Suckert, spent childhood summers at Casa Malaparte and now works to preserve its legacy. Until Oct. 22, visitors to Gagosian’s uptown outpost will enter a sparse approximation of the property’s front room, presented alongside a vitrine containing rare editions of Malaparte’s “Kaputt” (1944) and “The Skin” (1949), plus brooding photographs of the author at other historic sites on the Tyrrhenian Sea. The exhibition’s only pieces of furniture — a bench, table and console, all designed by Malaparte — are editioned reproductions commissioned by Suckert in an identical scale and materials. Reading correspondence between Malaparte and his carpenter, Suckert was surprised at “the strength of Malaparte’s words in communicating the shapes and really precise aesthetic guidelines.” Here, removed from their hometown, the pieces echo Casa Malaparte’s intricately carved hunks of walnut, squat Carrara marble columns, tuff stone and curved pine. Behind each is a framed digital print of the room’s window vistas: blue seas and cliffs, with out a human in sight. “Casa Malaparte: Furniture” is on view through Oct. 22, gagosian.com.

A Celebration of ’60s Style — And a Fashionable Love Story

The love story of textile designer Celia Birtwell and the dressmaker Ossie Clark, who died in 1996, is being celebrated in Prato, Italy, on the Museo del Tessuto’s newly opened exhibition “Mr. & Mrs. Clark.” After meeting as art students in Manchester in 1962, the pair embarked upon a decade-long romance and enduring friendship. They were best known for co-creating garments emblematic of the Swinging Sixties, including a series of androgynous jumpsuits made for Mick Jagger and bohemian gowns cut from Birtwell’s garden-inspired prints. The exhibit, curated by journalist Federico Poletti, showcases 40 iconic garments, the artists’ respective sketchbooks, editorial photographs of the couple, and exclusive footage of the style shows they produced — all of which reveal the undeniable influence Birtwell and Clark had on each other. A sheer, tiered bell-sleeve dress embodies Clark’s daring approach to design, a cream-and-poppy collared dress illustrates the pair’s signature dual-patterned gowns and a silk A-line dress titled “Mystic Daisy” — Birtwell’s favorite — is representative of the couple’s signature flower-power style. Although Birtwell and Clark separated in 1974, just before their final presentation at King’s Road Theater, the couple’s shared domestic life is immortalized within the portrait their mutual friend David Hockney painted of them. Birtwell has one hope for the retrospective exhibit of her former partner’s art: “He should never be forgotten. I need to at all times shine a lightweight on his work.” “Mr. & Mrs. Clark” is on view through Jan. 8, museodeltessuto.it.