A Tranquil Place to Stay in Northern Thailand 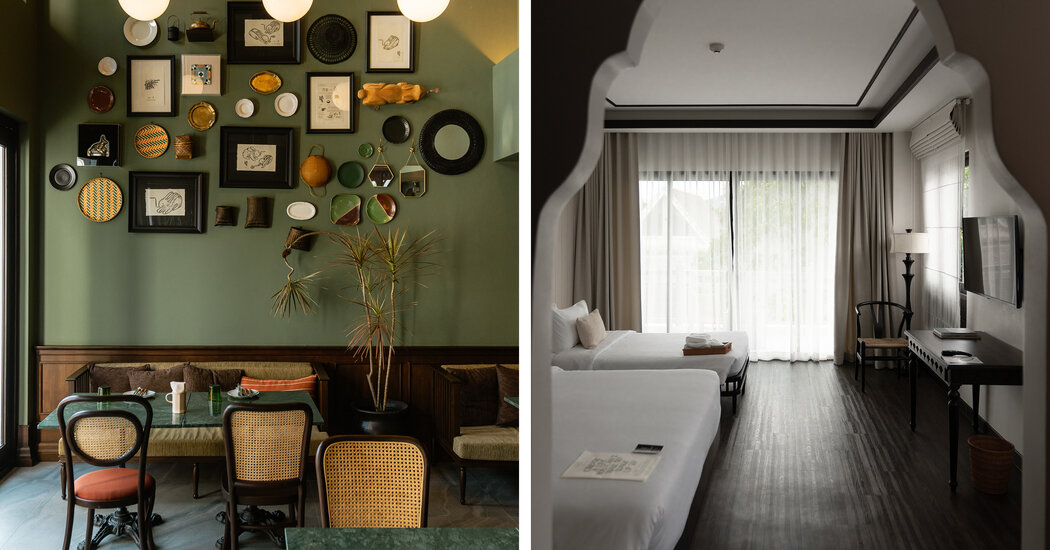 Welcome to the T List, a newsletter from the editors of T Magazine. Each week, we share things we’re eating, wearing, listening to or coveting now. Enroll here to search out us in your inbox every Wednesday. And you possibly can at all times reach us at tlist@nytimes.com.

A Minimalist Retreat in Chiang Mai

Chiang Mai, ensconced between the jungles and rice fields of Thailand’s mountainous north, has emerged because the country’s creative capital over the past few years. Recent openings, including the contemporary craft hub Kalm Village and the grocery, coffee shop and community space the Food Trust CNX, riff on the region’s wealthy cultural and culinary heritage with Twenty first-century takes on traditional crafts and recipes (the latter serves pizzas with northern Thai sai oua sausage and nam prik noom chile relish). The brand new Burirattana Hotel, opened in the center of Chiang Mai’s moated Old Town, has added architecture to that self-referential mix. Each its name and design draw inspiration from the nearby Khum Chao Burirat House, a late Nineteenth-century royal residence that fuses European-style arcades and stuccoed brick partitions with Lanna kingdom hallmarks reminiscent of balustrades from carved teak and a roof bedecked with clay tiles. The Burirattana turned its canvas, a four-story former warehouse, right into a similarly duotone structure with a base in white plaster and a teak-covered top floor. The renovated space sits alongside a newly built L-shaped wing that hugs a courtyard swimming pool. Inside, the 42 rooms are sleekly monochrome, furnished with an assemblage of Hans Wegner Wishbone chairs, picket desks with reeded legs and cushions covered in local textiles. “We desired to create a straightforward yet beautiful retreat inside Chiang Mai’s historical infrastructure,” says the property’s co-owner and brand director Khrongkhwan Kongprasert. “Many individuals come here searching for the slow life — the mix of today’s minimalist aesthetics with the cultural ideas of Lanna provides an ideal backdrop for that.” Rooms from $86, burirattanahotel.com.

“The one way out of the human rabbit warren,” wrote the Austrian American architect and critic Bernard Rudofsky in his 1977 book, “The Prodigious Builders,” “is, quite simply, down the rabbit hole.” One among the chapters in that book, “In Praise of Caves,” now lends its name to a recent exhibition on the Noguchi Museum in Queens. The exhibition, which runs through February, focuses on the work of 4 Mexican artist-architects — Juan O’Gorman, Carlos Lazo and Mathias Goeritz, who were contemporaries, and their most distinguished successor, Javier Senosiain — and their exploration of the query, because the museum’s senior curator, Dakin Hart, poses it, “What does it mean to live within the landscape and never just construct on top of it?” The show brings together sculptures, archival photographs, paintings and newly built architectural models, including an exquisitely detailed re-creation of the landmark Casa O’Gorman cave house, built between 1948 and 1956, which has since been remodeled beyond recognition. These architects shared Isamu Noguchi’s expansive vision of art and architecture that might reshape the world, and the works in Queens suggest not only an aesthetic alternative to the hard lines of modernism but additionally, of their fluidity, the winding path to a radically different future. “In Praise of Caves” is on view through Feb. 26, 2023, noguchi.org.

A Tasting Menu in Brooklyn’s Own Little Tokyo

Greenpoint, a Brooklyn neighborhood recently flush with Japanese shops and restaurants (Acre, a restaurant, serves karaage bentos for lunch; Kettl, a close-by teahouse, crafts matcha parfaits spangled with mochi and soba crunch) recently welcomed 50 Norman, an ambitious recent complex showcasing the absolute best of that country, from bespoke dashi packets to a rotating curation of ceramic artists. In its amber-lit back room, the restaurant House offers a sublime tasting menu at an eight-seat chef’s table. On a recent evening, the primary course was an fragrant consommé simmered from corn husks and niban dashi, the fragile second wash of broth. Later, next to a superbly seared domino of Wagyu, a shishito pepper was coated in charred shishito paste and a confetti of pepper flakes. During service, the chef, Yuji Tani, who’s inspired by the preservation of ephemeral ingredients epitomized in each French and Kyoto cuisines, fastidiously plated each dish from an airy open kitchen. “It’s like watching a play, with seven acts,” one patron said. It’s hard to miss Tani’s sleeves of tattoos while he works — he got them when he left a previous life as a futon sales rep and started learning to cook. His menu shifts with the day and the season; the dishes are deeply personal. Guests get some selection, too: orange wine or sake, to start out. And, before the Wagyu course, a pick from Tani’s collection of artisanal knives; the handles of that are whimsical, carved from cherry wood. Reservations for House open on Oct. 22, resy.com; the restaurant opens Dec. 1, house-bk.com.

The primary culinary delight at Mexico City’s recent Campos Polanco might be present in the room upon check-in: A chunk of Mexican chocolate spiced with five kinds of local chiles paired with coffee-infused mezcal produced within the Santiago Matatlán region of Oaxaca. The property, by the hospitality company Mosaic Hotel Group, offers celebrations of Mexican artistry throughout, from the architecture and interiors — designed by a trifecta of firms: All-Arquitectura, Amass & G and AvroKO Hospitality Group — to the food overall. During a stay, guests are treated to a breakfast dish of the day on the ground-floor lounge and courtyard. Specialties range from squash blossom enchiladas to fried-egg sandwiches; all recipes are prepared by the chef Diego Isunza Kahlo, the great-grand-nephew of the beloved Mexican artist Frida Kahlo.

Beyond the reception area of the six-floor Art Deco constructing, decorated with a mustard leather sofa and walnut lounge chairs upholstered in black leather or blue velvet, is a spiral terrazzo staircase that guests can use to access the hotel’s suites. They vary from cozy open-concept rooms with writing desks and claw-foot bathtubs to an expansive one-bedroom apartment with a chef’s kitchen and a wraparound balcony offering floor-to-ceiling views of the verdant Republica del Líbano garden. Each level encompasses a communal space decorated with works by Mexican artists. The second-floor library is adorned with psychedelic paintings by the artist Raúl Sisniega, while the rooftop terrace offers a geometrical mural in shades of cobalt, honey and rose by the artist Sara Daniela. Rooms from $415, campospolanco.com.

Going Back to the ’90s With the Artist Kiki Smith

When Kiki Smith saw the gathering of her own work from the Nineties put together by Timothy Taylor gallery for a retrospective, she experienced what she called a “lesson in self-acceptance.” The artist had spent the last decade mourning those taken by AIDS, including her sister, Bebe, and filling her days with work. “A variety of the time you’re making things because you’ve got weird little niches of interest. All of them are made out of some kind of strange earnestness, in moments of attempting to discover,” Smith said. She had been attempting to discover in what looks like every medium: drawings and lithographs; ceramics, bronze and papier-mâché; and even photography, including a famous self-portrait snapped with a camera designed for geological surveys (“My Blue Lake,” 1994). But as Smith, now 68, looked over what had felt, on the time, like quite a lot of disparate discoveries, she saw a through line: “There are a number of heads, and a number of birds.” The heads include “Untitled (Ear Ache)” (1991), a papier-mâché that reveals Smith’s obsession with the grosser facets of our bodies and influenced the direction of figurative art, while the glowering head in “Las Animas” (1997), a collage of photographs she took of her own veins and scars, shows her unflagging feminist stance. The birds include a bronze series of mythical creatures in “Harpies” (2000), and the moving “Six Crows” (1995), wherein dark bronze crows are strewn across a gallery floor, apparently felled in midflight. It seems to talk each to AIDS and to Covid-19 though, Smith clarifies, that wasn’t why she made them. Not that it matters: “It makes me think about my work: that I just follow and go where it goes.” “Kiki Smith” is on view through Nov. 12, timothytaylor.com.

The Greats: How Demna Became His Generation’s Most Thrilling Designer