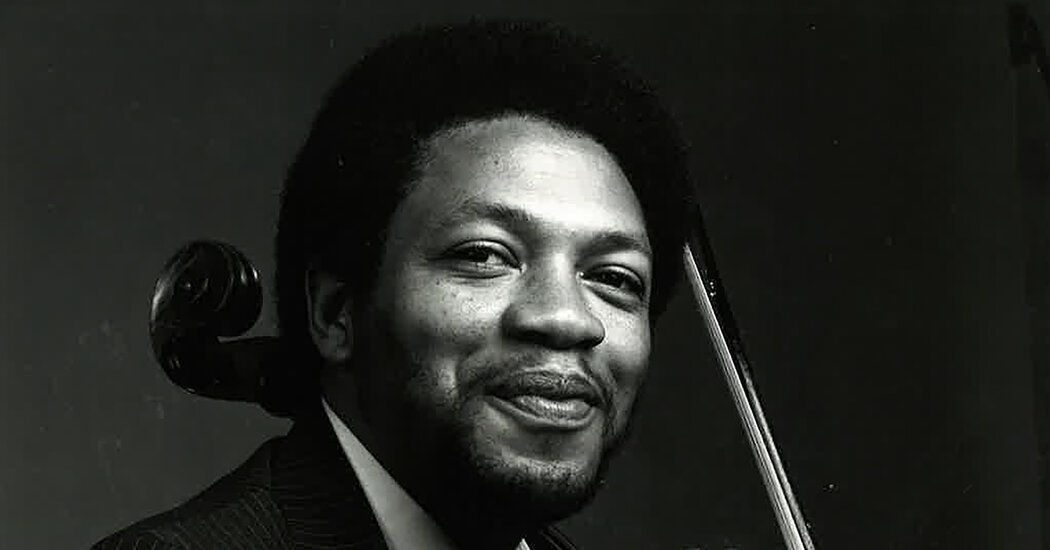 Abdul Wadud, a particular cellist who crossed genres and was a key collaborator with the Pulitzer Prize-winning composer Anthony Davis, died on Aug. 10 in Cleveland. He was 75.

His son, the R&B singer Raheem DeVaughn, said the death, in a hospital, was attributable to complications of multiple recent illnesses.

Mr. Wadud converted to Islam while in college but continued to make use of his given name, Ronald DeVaughn, when twiddling with classical ensembles, as he did with the Latest Jersey Symphony within the Nineteen Seventies.

He also performed in Broadway pit bands and with Stevie Wonder. But he’s best known for his work with Mr. Davis, the saxophonist and composer Julius Hemphill, and others who were central to the event of American composition and improvisation within the late Twentieth century.

Expert at eliciting variations of instrumental color with a bow, Mr. Wadud pioneered a pizzicato language on the cello that was sometimes subtle, sometimes booming.

For lots of his contemporaries, the primary taste of his instrumental prowess got here via his appearance on Mr. Hemphill’s 1972 album, “Dogon A.D.” (Like many essential recordings featuring Mr. Wadud, it’s currently out of print.)

“He asked Julius concerning the relation of the drum part and the cello part, how they hook up,” Mr. Carroll recalled in an interview, adding that he “pointedly observed” Mr. Wadud’s working methods “because I used to be, like, That is the cat!”

The composer, trombonist and scholar George Lewis said in an interview that he regarded Mr. Wadud’s playing on “Dogon A.D.” as a landmark of Twentieth-century music. He tied that performance to Mr. Wadud’s later solo recording, “By Myself,” which can also be out of print.

“There’s the electricity — he’s amplified — there’s the funk, there’s the off-meter; plenty of the stuff that turns up being crystallized in ‘By Myself’ is form of foreshadowed in ‘Dogon A.D,’” Mr. Lewis said. “It’s like James Brown — but I bet even James Brown couldn’t have done if it had been in 11/16.” (A 1977 live performance of the piece is included on a boxed set of Mr. Hemphill’s work, released in 2021 by Latest World Records.)

Mr. Wadud didn’t record much of his own music, apart from his 1977 solo LP, but his solo work had an impact. Writing in The Latest York Times concerning the Abdul original “Camille,” from “By Myself,” the cellist Tomeka Reid praised him for using “the entire range of the cello” and moving “between lyrical, free playing and groove with ease, something I strive to do in my very own work.” In a recent interview, Ms. Reid added, “What Pablo Casals did for the Bach suites, I feel like Abdul Wadud did for the brand new generation of cello in jazz.”

Across the time of “By Myself,” Mr. Lewis selected Mr. Wadud for an ensemble that performed the Lewis composition “Monads,” his try to “come to terms” with the graphic scores of the composer Morton Feldman.

“Abdul knew all about that type of thing; he knew more about it than I did,” Mr. Lewis said. “That combination, of getting the strong type of Black bass and having all these other possibilities — equally strong — made him someone you could possibly work with who was super versatile and will do anything.”

Similarly, the clarinetist J.D. Parran noted that “you could possibly run into Abdul Wadud anywhere.” He remembered with particular pleasure seeing “this gigantic smile” on Mr. Wadud’s face during their tour with Stevie Wonder, in support of the album “Journey Through the Secret Lifetime of Plants.” (Mr. Parran added that Mr. Wadud was the contractor for the ambitious, larger than usual outfit Mr. Wonder used on that tour.)

Mr. DeVaughn, Mr. Wadud’s son, recalled his father offering his ear when Mr. DeVaughn was recording his album “The Love Reunion.” “He went with me to a few studio sessions,” the son said. “And he would make some cool suggestions.”

Ronald Earsall DeVaughn was born on April 30, 1947, in Cleveland, the youngest of 12 children of Alberta Miller and Edward DeVaughn. He studied at Youngstown State University and Oberlin College in Ohio and, though accepted to Yale for graduate work in performance, selected to attend Stony Brook University, on Long Island, for his master’s degree, in order that he could study cello with Bernard Greenhouse of the Beaux Arts Trio.

In 2014, in one among his last interviews, Mr. Wadud said of Mr. Greenhouse: “He had the ensemble background. At the moment, I used to be considering if I desired to do something in classical, it might be in an ensemble, an arranged quartet, piano trio, or something of that nature.”

Mr. Wadud clinched a few of these chamber music ambitions within the Eighties as a part of a stellar trio with Mr. Davis and the flutist and composer James Newton.

“Plenty of people have spoken about his pizzicato playing, but I used to be also excited by his arco tone,” Mr. Davis said in an interview, referring to Mr. Wadud’s use of the bow. “He had a singular sound, an exquisite sound. I believe James and I were each so excited; it opened up so many avenues by way of our composition, to create pieces for him.”

When the trio performed with the Latest York Philharmonic, as soloists in an orchestral performance of Mr. Davis’s “Still Waters,” there got here a definite moment of respect for Mr. Wadud’s musicianship, Mr. Newton recalled.

At the identical time, Mr. Davis had unwittingly spoiled Mr. Wadud’s strategic use of his dual musical identities, during which he went by his original name, Ronald DeVaughn, for classical gigs while saving the name Abdul Wadud for improvisational work. “He was laughing,” Mr. Davis remembered, “Because, he said, now I had busted him: People within the classical world knew he was Abdul Wadud.”

Along with his son, Mr. Wadud is survived by a daughter, Aisha DeVaughn; a brother, Marvin DeVaughn; a sister, Floretta Perry; and five grandchildren. He was married and divorced twice.

Shortly after recording the album “Oakland Duets” with Mr. Hemphill in 1992, Mr. Wadud retired from playing. Mr. Newton said of that call: “I believe when people imagine that you simply’ve modified an instrument, as he did, the extent of what they’re seeking to hear every night just isn’t at all times easy.” Citing Mr. Wadud’s ability to operate in so many worlds, he said, “You add all of that together, and the pressures will not be minimal.”

Ms. Reid said she had tried to coax Mr. Wadud back into playing. He was the guest of honor on the 2016 edition of her Chicago Jazz String Summit. And she or he repeatedly told him how influential he was.

But a revival didn’t occur. “He was just so humble,” Ms. Reid said. “And I believe he was glad that I even reached out to him.” She added that many record firms have since approached her, wondering if Mr. Wadud could be occupied with reissuing “By Myself.”

Mr. DeVaughn, Mr. Wadud’s son, said that just such a release stays within the cards. “I plan to definitely keep the torch burning,” he said, “and having that stuff placed on vinyl.”