Adele Returns to the Stage in Las Vegas, Resolute and Reflective 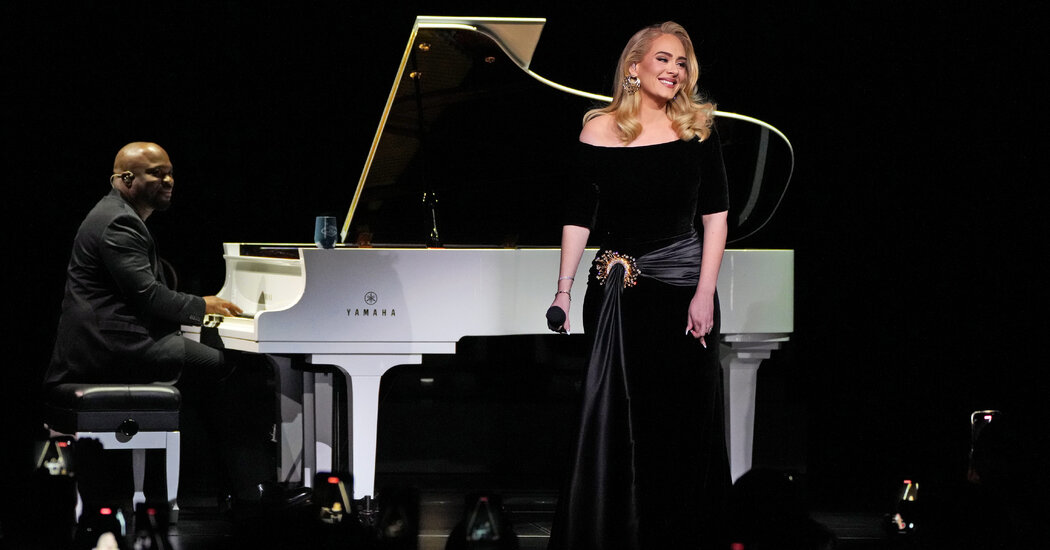 Dion pioneered the Twenty first-century Vegas pop star residency when, in 2003, she began her career-spanning four-year blockbuster, “A Recent Day.” But “Weekends With Adele” is a definite evolution of the formula. Adele could have easily booked a world arena or stadium tour in support of her most up-to-date album, “30,” which, in america and lots of other countries, was the best-selling album of 2021. As an alternative, she’s asking audiences to return to her, in a theater that holds about 4,000 attendees, bypassing the complications of touring within the Covid era and minimizing the disruption to her family’s life in nearby Los Angeles. (Other stars with similar gravitational pull, like Harry Styles, have been arranging their tours as a series of residencies, a model that tends to reward fans willing and capable of spend top dollar on tickets and travel.)

“Weekends With Adele” never quite felt like a promotional vehicle for “30,” though. Of the 20 songs on the set list, only five were from the brand new album, and its most emotionally wrenching material — the devastating vocal showcase “To Be Loved,” the searingly personal “My Little Love” — were nowhere to be found. As an alternative, she gave the impression to be most fully inhabiting the fabric from her breakout 2011 album, “21.”

She introduced the fiery breakup ballad “Take It All” as her favorite song from that LP, while the night’s vocal highlight was a masterful rendition of the craving “One and Only,” a mid-tempo track about devoting oneself to a real love, during which Adele gave the impression to be living each word. She was at her least distinct on the more upbeat songs from “25”: “Send My Love (to Your Recent Lover)” and “Water Under the Bridge” each got the group on its feet, but she still seemed unsure how one can inject her own personality into such generic pop fare.

The show, Adele said, is supposed to “grow” because it progresses, and its developments were beautifully paced and infrequently stunning of their reveals. “Set Fire to the Rain” was accompanied by a quintessentially Vegas waterfall and dazzlingly elaborate pyrotechnics that involve a prop piano, after which half of the set, going up in flames, staging so gloriously over-the-top that it was giving Book of Revelations.

For “Skyfall,” her Oscar-winning theme song from the James Bond movie of the identical name, a full orchestra was suddenly illuminated from a previously dark a part of the stage set. Concertgoers weren’t discouraged from using their phones, and the stage definitely seemed designed to look good in FOMO-inducing photographs. However the space, and the show itself, also felt satisfyingly immersive in a way that didn’t translate onto a smaller screen. Here, perhaps, was that elusive intimacy that Adele had been chasing.

Essentially the most emotionally effective a part of the night got here near the tip, when Adele performed the brassy, Streisandian slow-burner “When We Were Young.” To introduce the song, she (and a cadre of handlers) made her way through the group, asking a number of lucky audience members about their favorite memories from their youth, and, in the method, making the case that she’d be a better-than-average Oscar host.

While she was still walking the aisles, the band began playing the song and Adele sang it gorgeously, winding through the orchestra section to wave to different parts of the group and, occasionally, embrace her fans. She hugged an ecstatic Adele drag queen, and, on the soaring climax of the song, paper photographs of young Adele Adkins from Tottenham fluttered like confetti from the rafters. A diva, yes. But — in the proper room, and for the proper ticket price — the type you’ll be able to reach out and touch.

“Weekends With Adele” continues through March 25 on the Colosseum at Caesars Palace in Las Vegas.