After A long time, the Philharmonic’s Hall Sounds and Feels More Intimate 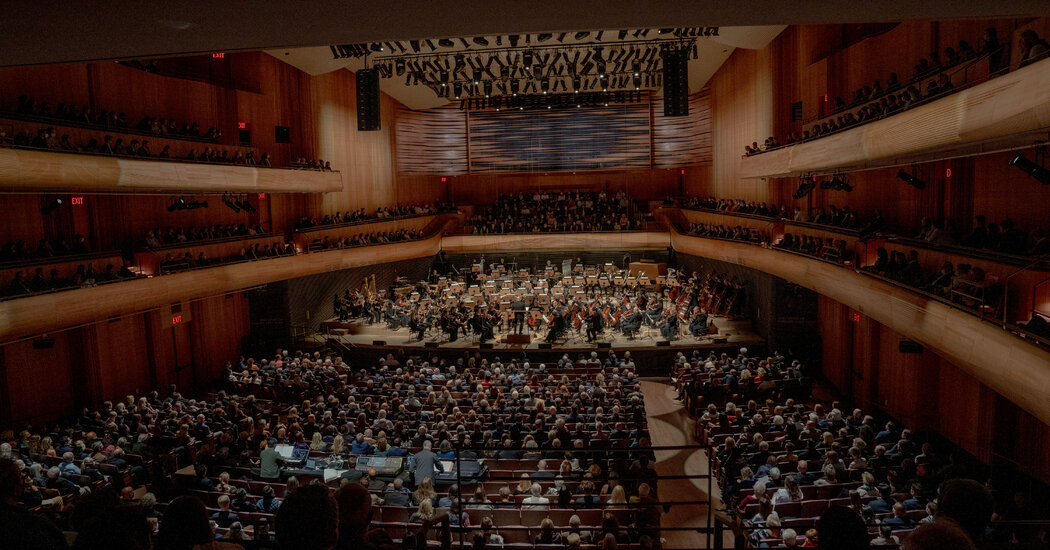 Raise your hand should you ever thought you’ll go see the Recent York Philharmonic, America’s most venerable orchestra, by entering off Lincoln Center’s plaza through a wide-open garage door. Nobody?

But yes: The essential entrance of David Geffen Hall — the Philharmonic’s home, newly, completely and happily renovated after a wait of a long time — is now a giant glass wall that may swoop up in good weather. And the past week has been vivid and mild in Recent York. In order audiences drifted in for a few of the first live shows within the revamped hall, the lobby inside and the plaza outside merged, with none barrier.

It’s a latest degree of informality, matched when you get into the transformed auditorium. The vast, drab shoe box that the town knew as Avery Fisher Hall after 1973 — a number of years before a significant remodeling attempted to repair the acoustics that had been criticized because the constructing first opened as Philharmonic Hall, in 1962 — has been gutted.

Five hundred seats have been eliminated, together with the proscenium. The stage has been pulled 25 feet forward, and seating has been stretched around it. The once-dingy interior is now acres of honey-colored wood, the seats upholstered in a floating-flower-petal motif. A theater by which it once felt like miles from the back row to the timpanis now verges on intimacy.

There’s intimacy in the way it sounds, too. Any judgment on a hall’s acoustics is very provisional after just a number of visits. For the remainder of October’s opening events — and the remainder of this season — I will likely be listening to the Philharmonic play in the brand new Geffen, and hearing how the experience changes as I sit throughout. The orchestra will likely be changing, too, adapting to its home the way in which a player adjusts to a latest instrument.

But a mighty improvement is already obvious. The acoustical problems of the hall post-1976 have perhaps been overstated. Especially because it aged, it sounded so bad a minimum of partly since it looked and felt so bad.

Now the sound, just like the whole experience of being there, is way more immediate and warm. We hear with our eyes in addition to our ears, and easily seeing your fellow audience members sitting above and across the stage makes Geffen sound more human.

On Wednesday, the Philharmonic’s first subscription program within the space, the third movement of John Adams’s “My Father Knew Charles Ives” demonstrated that magical orchestral alchemy in an excellent hall: the way in which dozens of musicians playing softly can feel huge. A low growl within the basses was palpable, not only audible. At quiet dynamics throughout the evening — just like the brooding opening of the catacombs section of Respighi’s “Pines of Rome” and the ambiguous haze of Tania León’s “Stride” — the sound was glistening and lucid.

If, at its loudest and densest, the Philharmonic seemed strident and blurrily blaring moderately than richly massed and blended, with the brasses and percussion overwhelming the woodwinds and strings, which may be less an inherent quality of the room than a remnant of the orchestra’s notoriously blunt and punchy style.

That style — which has not all the time been discouraged by Jaap van Zweden, on the rostrum as music director for an additional two seasons — evolved partly due to shortcomings of the old hall, the necessity to force the sound to achieve its distant upper reaches. But what felt essential merely to be heard in that former space could profitably be eased on this latest one. The Philharmonic not has to blast to a faraway audience, but can play more prefer it is sharing the music with a bunch of friends gathered across the campfire.

It’s been an extended journey to that campfire. Most observers swiftly recognized that the 1976 renovation, which built a latest theater within the shell of the 1962 constructing, had not solved the hall’s acoustical issues, and had introduced latest aesthetic ones. But the need was not present — and relations between the Philharmonic and Lincoln Center, its landlord, were too dysfunctional — to do much about it.

Across the turn of the twenty first century, a plan emerged to demolish the constructing entirely and begin over, however the Philharmonic was so spooked by the scheme’s probable cost and duration that it tried to select up and move to Carnegie Hall, its home before Lincoln Center was built. That escape failed miserably, leaving Avery Fisher Hall as the middle’s problem child, ignored in a sweeping, six-year campuswide refurbishment that finished in 2012.

In 2015, David Geffen restarted the hall project with a $100 million gift — minus the $15 million required to purchase off Avery Fisher’s heirs, who were surprised to learn that Fisher’s name wouldn’t be permanently attached to the constructing. However the design that was developed within the wake of Geffen’s donation once more spiraled uncontrolled in ambition and price tag.

It wasn’t until two pragmatic chief executives, Deborah Borda on the Recent York Philharmonic and Henry Timms at Lincoln Center, arrived a number of years ago that a workable project — which might, as in 1976, fill the present shell with latest contents — was finally agreed on. And when the pandemic shut down performances, construction was fast-tracked in order that the opening has come two years sooner than planned, without exceeding the $500 million budget.

The one a part of the Nineteen Sixties auditorium that is still is the zigzag ceiling, and it’s been painted black and hidden behind a billowing silvery sheath. In a single crucial way, though, it is a restoration: At 2,200 seats (versus 2,700 starting in 1962), the hall finally has the capability for which its acoustics were originally designed.

In pulling the stage forward and surrounding it with seating, the brand new theater, designed by Gary McCluskie of Diamond Schmitt Architects, with Paul Scarbrough in control of the acoustics, borrows the approach that was workshopped with a brief structure for over a decade at Lincoln Center’s summertime Mostly Mozart festival. That setup was in turn influenced by the “vineyard” seating of the Philharmonie in Berlin and its most famous American descendant, the Frank Gehry-designed Walt Disney Concert Hall in Los Angeles.

If it lacks Disney’s flair, the Geffen auditorium, clean and easy, is more successful than the hall’s public spaces, which have been redesigned by Tod Williams and Billie Tsien. Their essential achievements are in decluttering. The box office has been moved to a corner, allowing the lobby to increase far deeper off the plaza, reducing crowding in an area now more appealing to linger in. Having lost its weird mudroom of an archival display, the grand promenade one floor up is rather more expansive, too. The corner of sixty fifth Street and Broadway has turn out to be a small performance space visible from the road.

However the eclectic decorations — the vaguely tree-shaped lights on the primary tier balcony, for instance, and the scattering of curvy couches within the lobby — have the brightly clashing patterns and generic whimsy of a Marriott, a university student center or the brand new Delta Sky Club at LaGuardia. The champagne-colored curtains surrounding the grand promenade, stitched with bits of light-catching gold, have the mass-market feel of those spaces, too — bathed within the everlasting deep blue light of a catering hall cocktail hour.

Per week in, the sprawling spans of frosted glass across the promenade are already smudged, which is a bit icky and a bit charming: The brand new Geffen Hall already has a snug, lived-in feel. That appears to be the purpose. In any case, Marriotts, student centers and airport lounges are designed to be antitheses of the intimidation often related to classical music. But in eschewing intimidation, did the space must reject glamour, too?

A number of the ways the brand new hall intends to embrace a broader audience already feel persuasive. A concert hall’s quality in unamplified music is not any indication it would work when amplified, too. (Carnegie Hall is a classic example.) But when its retractable fabric dampening panels are opened and line the partitions, the brand new Geffen is nearly as good with amplification as without.

“San Juan Hill: A Recent York Story,” Etienne Charles’s multimedia excavation of the history of the neighborhood razed to construct Lincoln Center, which officially opened the hall on Saturday, begins with a small jazz ensemble playing alone for half an hour. The amplified sound was direct but resonant; even Charles’s slightest finger taps on a drum registered, simply enough.

And on Tuesday, the mandolin virtuoso Chris Thile convened a handful of guests for the primary in his series of events this season modeled on bluegrass jam sessions. Merrill Garbus, the singer of the band Tune-Yards, got here onstage in vivid green socks, so Thile took his shoes off, too. The sound was crisp yet tender, the moody lighting classily done.

It was astonishing and pleasant to understand that Geffen Hall had turn out to be a spot where artists could pad across the stage of their socks, or groove as quietly as they might in a tiny jazz club. On Tuesday there wasn’t that vaguely embarrassing feeling of an orchestra hall slumming it with pop. Geffen felt — and sounded — natural.

Near the top of the show, Thile looked out into the darkness and smiled broadly. “Let’s do that lots more times,” he said.