Allan M. Siegal, Influential Watchdog Inside The Times, Dies at 82 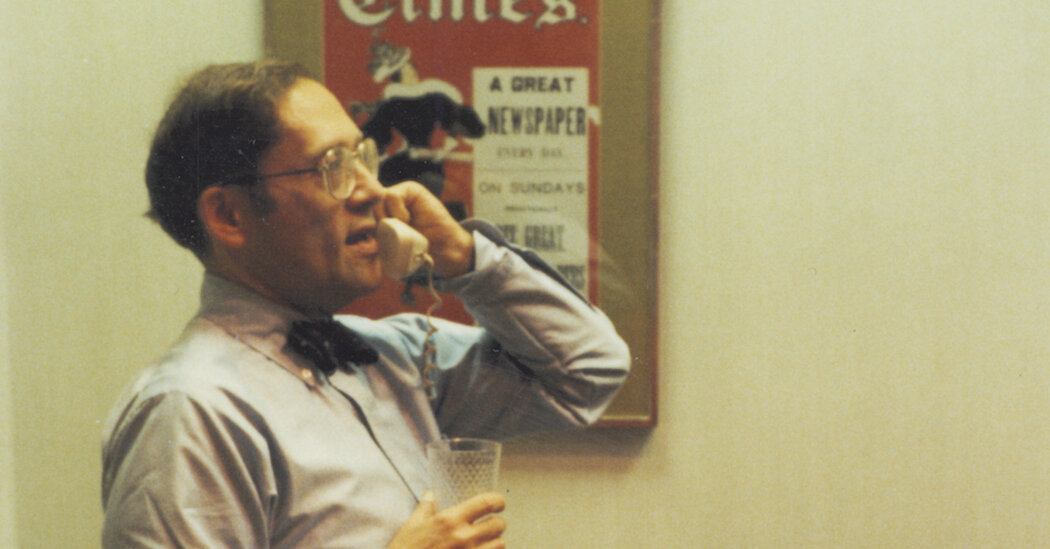 Allan M. Siegal, a former assistant managing editor of The Latest York Times who left a deep imprint on the newspaper’s policies and practices as its exacting and unquestioned arbiter of language, taste, tone and ethics for 30 years, died on Wednesday at his home in Manhattan. He was 82.

His wife, Gretchen Leefmans, confirmed the death. She didn’t specify a cause but said he had handled heart issues for a few years.

Mr. Siegal, who began at The Times as a duplicate boy in 1960, was widely respected, often revered and sometimes feared within the newsroom. Though never the face of The Times — he worked in relative anonymity — he was something like its collective conscience, an institutionalist watching over a spot whose folkways he was often called on to codify.

He did so within the late Nineties with William G. Connolly, a senior editor who had met Mr. Siegal once they were copy boys within the paper’s headquarters on West forty third Street in Manhattan, off Times Square. The 2 edited a revised and expanded edition of “The Latest York Times Manual of Style and Usage,” a guide consulted by news organizations and journalists nationwide.

“Readers will consider more of what we do know if we level with them about what we don’t” was one among Mr. Siegal’s favorite injunctions, articulated long before media outlets within the digital era began emphasizing transparency in news gathering and editing.

One other: “Being fair is healthier than being first.”

Mr. Siegal’s knowledge of grammar, history, geography, nomenclature, culture and cuisine was expansive. But on no subject was he more authoritative than The Times itself.

“Al knew every little thing about The Times, it seemed,” Mr. Connolly once said. “On the age of 19 or 20, he had made the paper his life and his religion.”

Mr. Siegal had a big hand within the paper’s news report early in his Times profession.

As night foreign news editor, he helped shape coverage of the Vietnam War and was a part of the team that edited The Times’s landmark report of the key government study that got here to be generally known as the Pentagon Papers. He oversaw the newsroom’s conversion to electronic typesetting within the late Nineteen Seventies, and in 1980 he organized the news operation for a national edition, an engine of The Times’s subsequent growth.

In 2003, within the aftermath of a scandal through which the fabrications of a reporter, Jayson Blair, led to the autumn of the newsroom’s top two managers, Mr. Siegal headed an internal committee that reviewed the paper’s ethical and organizational practices.

Amongst its recommendations was the creation of a recent job: standards editor. Mr. Siegal was the primary to be named to the position, adding the title to that of assistant managing editor, a post he held from 1987 until his retirement in 2006. On the time, his name had been listed among the many paper’s top editors on the masthead, which appeared on the editorial page, greater than twice so long as anyone else’s.

Max Frankel, the manager editor who promoted Mr. Siegal to assistant managing editor, called him “a shining symbol of the profession of an inside man.”

“Elevating him was intended to serve notice that there’s a distinguished profession available at The Times for non-reporters,” Mr. Frankel added, in an interview for this obituary in 2005. “It was a peculiar type of affirmative motion, but he was superbly qualified.

“I used to call him ‘Pooh-Bah,’” Mr. Frankel continued. “He had seven or eight portfolios that dominated every aspect of the production of The Times, the output of stories, and all the principles and regulations — drawers filled with contracts with the business side as to how much space we got, and the way we filled it, and where the ads went. The entire design and structure of the paper was in his hands.”

But Mr. Siegal was temperamentally reluctant to buck the chain of command.

“Al’s knowledge of current affairs — and of broad journalistic ethics — was all the time right up there with anyone’s,” Evan Jenkins, a fellow editor on the news desk, recalled in 2005. But, he added, “he was not one to suggest that perhaps the emperor had no clothes, and there have been times when that was so.”

Mr. Siegal was able to withering criticism. His post-mortem critiques to subordinate editors and reporters — written in precise penmanship with a green felt-tip pen (generally known as “greenies” among the many staff, they showed up well against black-and-white newsprint, he found) — could possibly be as terse as “Ugh!” “How, please?” “Name names” and “Absurd!”

Once, having demanded that a headline mix several complex elements in a brief word count, he found the result wanting: “As if written by pedants from Mars,” he declared.

But his rockets were also astute and instructive, guiding generations of editors and reporters within the finer points of favor and tone. And maybe because he was so demanding, his not-infrequent notes of praise were cherished all of the more. “Nice, who?” was his trademark comment when he thought a headline or caption, by an anonymous editor, was especially artful. (The reply, the name of the editor, would seem — to the editor’s great pride — in the following day’s compilation of post-mortems, run off and stapled together by copy machine and distributed throughout the news department.)

Other critiques showed a biting humorousness. “If this bumpkin spelling is the most effective we are able to do,” he once wrote of a subheadline that included a reference to “fois gras” (relatively than foie gras), “we should always persist with chopped liver.” When a headline allowed that the football coach Mike Ditka “should recuperate” from a heart attack, Mr. Siegal wrote: “Unless God returns our call, we shouldn’t predict in such cases.”

“He was famously a person of integrity,” said the previous Times executive editor Bill Keller, “but he managed to use it without being a dispenser of prudish rectitude, and in reality made good sport of his status because the house disciplinarian.”

“When he entered the hospital to have his heart worked on,” Mr. Keller added, “he joked to some of people who some colleagues could be surprised to learn he had a heart.”

Allan Marshall Siegal was born on May 1, 1940, within the Bronx to Irving and Sylvia (Wrubel) Siegal. His father, who had immigrated from Poland as a young person, ran a seltzer delivery company for a time, and young Allan would help deliver bottles to customers around Pelham Parkway. Irving later became a landlord, and Allan would work as a handyman in his buildings. His mother was a homemaker.

Allan attended Christopher Columbus High School, within the northeast Bronx, where he learned French and was the editor of the college newspaper.

He was offered a scholarship by Latest York University, and while still an undergraduate he was offered a spot at The Times as a duplicate boy. He began on Sept. 11, 1960.

Armed with a journalism degree from N.Y.U., Mr. Siegal joined the foreign desk as a duplicate editor in 1963 and, after a temporary sojourn at ABC News, writing for the anchor Peter Jennings in 1966, he was promoted to assistant foreign editor in 1971, the 12 months he worked on the Pentagon Papers.

The Times was so concerned that the federal government might discover that it had the documents and take a look at to seize them before publication that it arrange what amounted to a secret newsroom within the Latest York Hilton hotel, a couple of blocks away. To interrupt the stress, Mr. Siegal brought rubber duckies to a colleague for his baths.

Along with his stint at ABC, he had one other writing job: as a reporter covering the Bronx for The Times in 1974. His editors liked his work. One article, a couple of woman’s unexpected delivery, began, “Mrs. Hattie Thomas arrived at her daughter’s kindergarten the mother of three, and left the mother of 4.”

Mr. Siegal had tried reporting to boost his profession prospects at a paper whose senior editors had all been reporters. But he found writing to be painful and returned to editing on the foreign desk.

He was named news editor of the paper in 1977, answerable for overseeing the design and editing of the front page, and for producing “Winners & Sinners,” the paper’s in-house critique of writing, editing and visual presentation, founded by a predecessor, Theodore M. Bernstein. He was promoted to assistant managing editor in 1987.

In early 2002, long before same-sex marriages were legalized in the US, Mr. Siegal was named to move a standards committee that ultimately advisable a change in Times policy on publishing announcements of same-sex unions in its society pages. Where the paper had previously limited announcements to marriages legally recognized in the US, it declared in August that 12 months that it might begin publishing “reports of same-sex commitment ceremonies and of some forms of formal registration of gay and lesbian partnerships.”

Mr. Siegal married Ms. Leefmans, then a contract manuscript editor, in 1977. He battled obesity for much of his life, losing a prodigious amount of weight before his daughter, Anna, was born. He told friends that if he was going to have a baby, he desired to have the opportunity to carry it on his lap. He later regained much of the burden.

Along with his wife, he’s survived by his daughter, Anna Siegal; a son, Peter; and a granddaughter.

Mr. Siegal’s devotion to The Times was so all-encompassing that virtually no detail escaped his notice — not even the listing of survivors in an obituary.

Within the revised Times stylebook that he co-edited within the Nineties, the entry on obituaries includes this recommendation: “Survivors needs to be listed at the tip of a routine obituary. But a fuller one, if artfully constructed, will attend to the fundamentals earlier and end with an anecdote or otherwise memorable paragraph.”

Mr. Siegal provided a closing paragraph himself — though not with that intention in mind — when he succinctly summed up his views about newspaper style within the preface of the stylebook that he had so assiduously helped to assemble.

“The very best of favor relies on reporters’ ears and eyesight,” he wrote, “and on simplicity — the unpretentious language of a letter to an urbane and literate friend. In that setting, the sudden glimmer of an unusual word, a syncopation or a swerve in logic lets the reader know that here is something richer than an hourly bulletin.”