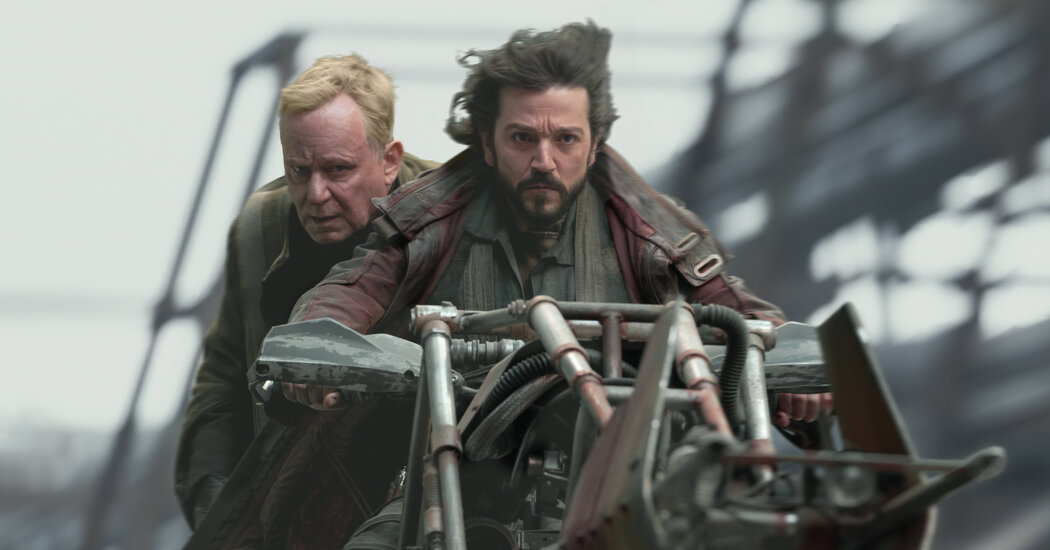 As the massive science-fiction and superhero franchises have proliferated, their mantra has been that television is a spot for diversification and inventive freedom — to do something different, inside reason. Hence Marvel’s strenuously meta “WandaVision” or Paramount’s goofy, animated “Star Trek: Lower Decks.”

“Andor,” the most recent series within the “Star Wars” universe (premiering Wednesday on Disney+), doesn’t take one in all those hard detours. But it surely’s different in its own way. Within the 4 (of 12) episodes available for review, it continually feels as if the individuals who made it like a number of things — “Blade Runner,” “Avatar,” “Casablanca,” Vietnam War metaphors — higher than they like “Star Wars.”

Not that there’s anything flawed with that. The defining feature of “Andor” is the way it takes a “Star Wars” story and, without getting conceptual, transposes it in visual and tonal terms. Heavily latexed aliens, plastic-suited storm troopers and vast, exotic landscapes are, for essentially the most part, out; humans (or humanoids) wearing nondescript uniforms in a battered, urban-industrial backdrop are in. Costume-heavy Saturday-serial space opera is replaced by straight-ahead sci-fi motion with a real-world anti-corporate theme.

And the excellent news about “Andor” is that the brand new feel and appear are rendered meticulously and evocatively; a number of effort, led by the creator and showrunner Tony Gilroy, has been spent on giving the show a gritty and realistic texture. Moment to moment, it’s easy to only calm down and luxuriate in the change. The opening scene, a “Blade Runner” homage that leads right into a dark, seamy version of the everyday “Star Wars” cantina, is a witty example of the show’s method.

But making “Andor” less like “Star Wars” means, on this case, making it more like a number of other science-fiction dramas. And while its surface attractions are significant, you could end up in search of things that other sci-fi stories supply, like compelling characters and a narrative pulse.

Following the final pattern of serialized franchise extensions, “Andor” goes back in time, fleshing out and coloring in a small, retrospective piece of the general story. (Advancing the narrative remains to be the province of movies.) On this case it’s a fair smaller piece than usual. Cassian Andor, played by Diego Luna, was a personality created for a movie, “Rogue One: A Star Wars Story,” that was a stand-alone time capsule in its own right. Giving him a back story in “Andor” is embroidering on an embroidery.

Gilroy was brought in to do rewrites on “Rogue One,” and maybe he had a way of unfinished business, because the actual challenge of putting Cassian at the middle of a series is that he’s a cipher in that movie — a rebel operative with a ruthless streak and a shady past who’s just there as a foil for the film’s young heroine. When he joins her in a haze of self-sacrificial glory, his epiphany feels completely unearned.

There’s no reason that such a personality couldn’t be became something more interesting for the series, but through the early going, “Andor” doesn’t pull it off. Cassian’s antisocial tendencies, and his resourcefulness, are given a foundation in a childhood on a planet whose Indigenous individuals are exploited by an Empire-sanctioned mining company. (These forest-planet flashbacks are an unusually clear expression of the hoary colonialist clichés “Star Wars” falls back on when depicting the Empire’s reach.)

But that latest information doesn’t make him any more interesting; neither does the try to make his adult character, a thief and black marketeer, right into a Humphrey Bogart-style cynical romantic, declining to decide on sides until his hand is forced. That’s the first narrative thrust of the early season, as a covert rebel leader played by Stellan Skarsgard tracks down Cassian and enlists him in a dangerous mission against the corporation that ravaged his home planet.

The scene through which Skarsgard’s character recruits Cassian while they’re pursued by corporate goons takes up much of the fourth episode, and it’s an exciting, well-executed motion set piece. However the recruitment pitch is notably uninspiring, and that’s typical of “Andor,” through which motion and design are greater than satisfactory while the thinness of the characterizations leaves you unfulfilled. (The identical may very well be said of old-school “Star Wars” movies under George Lucas’s helm, in fact, but they might make up among the balance in emotion and sheer, propulsive entertainment value.)

Luna, who shot to stardom in America with “Y Tu Mamá También,” in 2001, is a tremendous actor, but he’s still unable to bring much besides an air of juvenile grievance to Cassian, who’s just awfully hard to care about. Thin writing is a problem up and down the forged list; people seem less essential than the depictions of political intrigue and company malfeasance, that are handled well but aren’t that different from any variety of other dystopian dramas. Fiona Shaw stands out in a supporting role as Cassian’s rough-and-tumble mentor, and Adria Arjona is fun to look at as his sparring partner and probable love interest.

It’s typical of “Star Wars” projects that the perfect performances are inclined to be given by robots. That was the case in “Rogue One,” where the hulking war droid voiced by Alan Tudyk was the perfect reason to look at. “Andor” has a small, decrepit, R2-D2-like figure named B2EMO, voiced by Dave Chapman and type of a cross between a toolbox and a store vac. He doesn’t have quite a bit to do within the early episodes, but he has signs of personality. Control him when the fighting really breaks out.