Archie Roach, Who Lived and Sang the Aboriginal Blues, Dies at 66 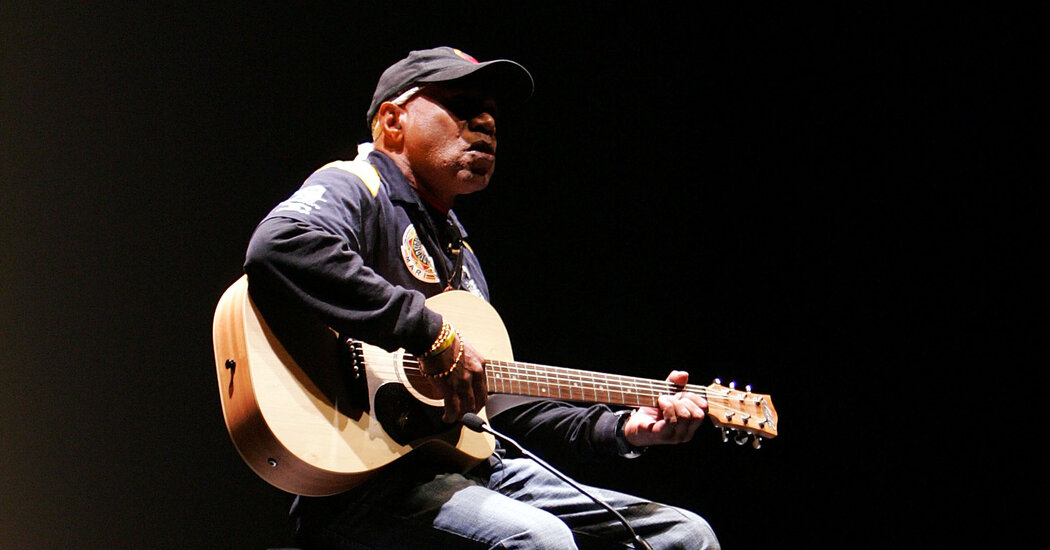 In the future in 1970, Archie Cox’s highschool English class in Melbourne, Australia, was interrupted by a voice from the intercom: “Could Archibald William Roach come to the office?”

An uncanny feeling took hold of 14-year-old Archie: This name, which he had no recollection of, he one way or the other knew to be his own.

A letter to Archibald William Roach awaited him. It announced that Nellie Austin, a reputation he had never heard, was his mother, and that she had just died. His father and namesake was dead, too, the letter said. It was signed by Myrtle Evans, who identified herself as his sister.

Inside a yr, Archie had dropped out of faculty, abandoned Dulcie and Alex Cox — who, he realized, were only his foster parents — and launched into a quest to find who he really was.

He spent years with no home. He was imprisoned on burglary charges twice. He tried to kill himself. All of the while, he kept bumping into revelations about his family and why he had been taken away from them.

When he left home, there was not a reputation for what Archie was. But today people like him are considered a part of the Stolen Generations — Indigenous Australians seized from their families as children to be assimilated into white society.

This history is understood thanks in no small part to Mr. Roach, who turned his wayward life into the fabric for a profession as one in all Australia’s best-loved folk singers, and who in doing so dramatized the plight of his people.

He died on July 30 at a hospital in Warrnambool, a city in southeastern Australia, his sons Amos and Eban announced on his website. He was 66.

The announcement didn’t cite the cause, but Mr. Roach had struggled with lung cancer and emphysema, requiring him to perform while respiratory through a nasal cannula.

His rise to prominence began within the late Eighties and early ’90s, on the strength specifically of 1 autobiographical song: “Took the Children Away.” He performed it at Melbourne Concert Hall when he opened for the favored Australian rock singer Paul Kelly.

“There was this stunned silence; he thought he’d bombed,” Mr. Kelly recalled to The Guardian for a 2020 article concerning the song’s impact. “Then this wave of applause grew and grew. I’d never heard anything prefer it.”

Mr. Kelly was a producer of Mr. Roach’s first album, “Charcoal Lane,” released in 1990. When the 2 toured together, Aboriginal audience members approached Mr. Roach, saying they, too, had been taken from their families.

“He began to understand it was a much wider story,” Mr. Kelly said.

The song became a national hit. “When he sings ‘Took the Children Away,’ or any of the tracks on ‘Charcoal Lane,’ it cuts through like great blues should,” Rolling Stone Australia wrote in 1990. “The experience becomes universal.”

In a 2020 article commemorating the thirtieth anniversary of “Charcoal Lane,” Rolling Stone Australia credited “Took the Children Away” with helping to encourage a landmark 1997 government report estimating that as many as one in three Indigenous children were seized from their families between 1910 and 1970.

Fourteen more albums followed “Charcoal Lane,” ranging in style from blues to gospel, while Mr. Roach’s wife, Ruby Hunter, gained renown of her own as a musical partner of Mr. Roach’s, and as a songwriter in her own right.

The Aboriginal singer and songwriter Emma Donovan told The Guardian that when she was growing up, “we’d see Archie and Ruby on TV.”

“They were our royalty, our king and queen,” she said.

Archibald William Roach was born within the Framlingham Aboriginal Reserve, in southwestern Australia, on Jan. 8, 1956. When he was older, he recovered a memory of a tall man with long limbs and curly hair reaching toward him while cops were grabbing him. That man, he realized, was Archibald, his father.

He was raised largely by the Coxes. The implications of the proven fact that he was Black and that the Coxes were white dawned on Archie only steadily.

His foster father, who was Scottish, longed for his homeland, and at night tears got here to his eyes as he sang ballads across the family’s organ. “For years I assumed I missed Scotland,” Mr. Roach wrote in “Tell Me Why,” his 2019 memoir. “I took great joy in sharing those songs with Dad Alex, because I desired to be near him, and I also wanted to know the ability that the songs had over him.”

He took a circuitous path to the return address on the letter he had received, in Sydney; by the point he arrived, his sister had left, without informing her neighbors of her next destination.

A homeless one-armed Aboriginal man named Albert took care of Archie, showing him where in Sydney to sleep freed from charge and teaching him learn how to panhandle. Archie began drinking together with his recent Aboriginal friends from morning till night.

“I look back now and see the darkness that will have touched every moment unless we numbed it with beer and port and sherry,” he wrote in his memoir. “We were a part of an obliterated culture.”

He built a life from openness to likelihood and the coincidences that ensued. Archie found his family by running into one in all his sisters at a bar in Sydney. On a coin flip, he decided to go to the South Australia city of Adelaide, where he met Ms. Hunter, who would grow to be the love of his life. She, too, was an Aborigine who had been taken from her parents.

Probability also granted Mr. Roach knowledge about his past. In 2013, he stumbled across the primary photographs he had ever seen of his father as a boy, and of his grandmother.

He learned that there have been dangers in attempting to recuperate tradition. He and his peers sought approval from elders before happening dates with other Aboriginal people, to be certain that they weren’t related. Taking on the old career of his father and brother, Mr. Roach became an itinerant boxer. He realized in the midst of one bout that he was fighting his own first cousin.

At other times he earned a living by picking grapes, pushing sheep up kill runs at an abattoir and doing metalwork at a foundry. He often lost jobs in a blur of drunkenness. The binges induced seizures. During one bender, overcome with despair at his prospects as a father and husband, he tried hanging himself with a belt. After greater than a decade of patience, Ms. Hunter left him.

Mr. Roach was jolted into sobriety. He found work as a health counselor at a rehab center in Melbourne. He rejoined Ms. Hunter and their two sons, and he threw himself into writing songs.

“Like my daddy before me/I set ’em up and knock ’em down/Like my brother before me/I’m weaving in your town,” he wrote in “Rally Around the Drum,” a song from the early Nineteen Nineties about his boxing days.

“At 15 I left my foster home/Searching for the people I call my very own/But all I discovered was pain and strife/And nothing else but an empty life,” he wrote in “Open Up Your Eyes,” which was not released until 2019.

Complete details about his survivors was not available, but along with his sons, Mr. Roach and Ms. Hunter unofficially adopted 15 to twenty children. The impetus in some cases was simply encountering a teenager on the road looking “slightly worse for wear,” he told the Australian newspaper The Age in 2002.

Ms. Hunter died suddenly in 2010 on the family home in Gunditjmara country, in southeast Australia, the ancestral land of Mr. Roach’s mother.

As “Took the Children Away” grew in fame, even to the purpose of overshadowing Mr. Roach’s other work, he was often asked whether he got sick of singing it.