As Hospitals Close Children’s Units, Where Does That Leave Lachlan? 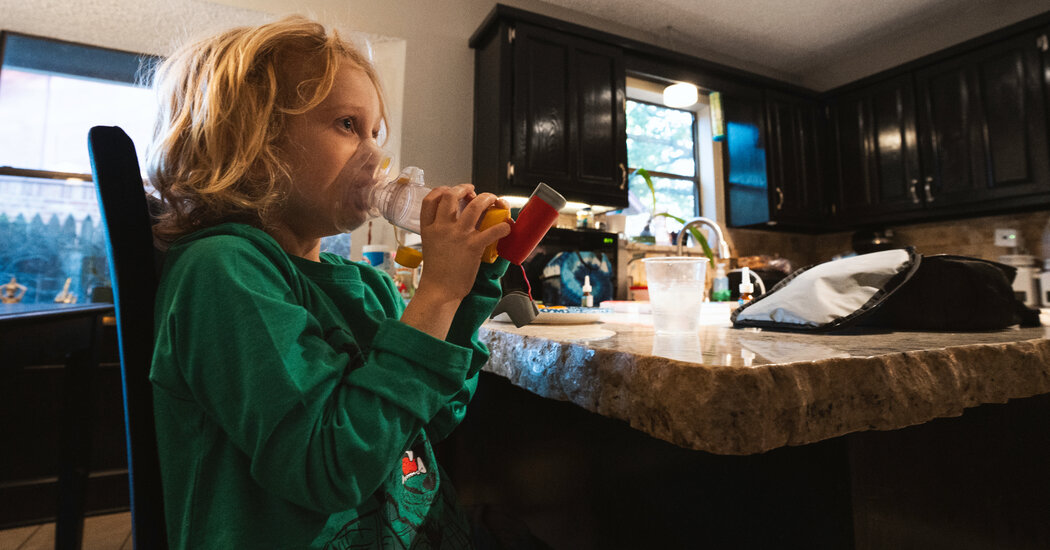 BROKEN ARROW, Okla. — It was Lachlan Rutledge’s sixth birthday, but as he mustered a laborious breath and blew out one candle, it was his mother who made a wish: for a pediatric hospital bed in northeast Oklahoma.

The kindergartner has a connective tissue disorder, severe allergies and asthma. Those conditions repeatedly landed him within the pediatric intensive care unit at Ascension St. John Medical Center in Tulsa, with collapsed veins and oxygen levels so low, he was unresponsive to his mother’s voice.

But in April the hospital closed its children’s floor to make room for more adult beds. So on a September morning, after coming down with Covid for the fourth time and with what looked like bilateral pneumonia, Lachlan was struggling to breathe in an overcrowded emergency room on the Children’s Hospital at Saint Francis — the one remaining inpatient pediatric option in Tulsa.

“We’re all the time preparing for battle. It’s just a matter of where we’re going to fight,” said his mother, Aurora Rutledge, looking frightened as she twisted the blonde ringlets that poked out from under Lachlan’s Spider-Man headphones.

Hospitals across the country, from regional medical centers to smaller local facilities are closing down pediatric units. The explanation is stark economics: Institutions make more cash from adult patients.

In April, Henrico Doctors’ Hospital in Richmond, Va., ended its pediatric inpatient services. In July, Tufts Children’s Hospital in Boston followed suit. Shriners Children’s Latest England said it will close its inpatient unit by the top of the 12 months. Pediatric units in Colorado Springs, Raleigh, N.C., and Doylestown, Pa., have closed as well.

“They’re asking: Should we maintain kids we don’t make any money off of, or use the bed for an adult who needs a bunch of high-priced tests?” said Dr. Daniel Rauch, chief of pediatric hospital medicine for Tufts Medicine, who headed its general pediatric unit until it closed over the summer. “If you happen to’re a hospital, that’s a no brainer.”

Many hospitals have converted children’s beds to adult I.C.U. beds throughout the pandemic and are reluctant to vary them back. Now, staff shortages, inflation — drug costs have increased 37 percent per patient in comparison with prepandemic levels — low Medicaid reimbursement and dwindling federal subsidies granted throughout the pandemic have left some health centers operating on negative margins and wanting to prioritize essentially the most profitable patients.

Young patients like Lachlan, who has private insurance, occupy beds to recuperate from infections or asthma attacks but don’t undergo lucrative, billable procedures — like joint or heart surgeries — which are more common amongst aging patients.

There have been no aggressive legislative efforts to maintain hospitals from closing or shrinking their pediatric units. Democratic senators introduced a bill last 12 months to grant funding to specialized children’s hospitals to enhance their infrastructure, but it surely has not moved past the assigned committee.

Health policy experts say a crucial solution could be to encourage hospitals to care for youngsters by increasing Medicaid reimbursement rates. But even higher Medicaid and personal rates wouldn’t come near what hospitals can charge for remunerative adult procedures, and with many state budgets already strained, experts say the regulatory move is unrealistic.

Hospitals that not admit children depend on transferring them to pediatric units at other hospitals. But when even the biggest pediatric floors within the country are at capability, the pileup of critically in poor health children in E.R.s may cause patients’ conditions to worsen.

“Picu kids don’t belong here,” an overwhelmed E.R. doctor in a small Boston area hospital wrote two weeks ago to his hospital’s chief medical officer in an expletive-ridden text message reviewed by The Times. (P.I.C.U. is the acronym for pediatric I.C.U. The text message was shared on the condition that the hospital not be identified.)

Every I.C.U. for youngsters in Boston was full on the time, and the closest open beds were in Latest Haven, Conn., and Vermont. The doctor who sent the text message considered intubating the kid within the E.R. while he waited for a better bed to grow to be available.

As children return to highschool, waves of illnesses are overrunning most of the units that remain.

“Forget the two-week January crush. We couldn’t find beds in May or August or September,” said Dr. Melissa Mauro-Small, the chief of pediatrics at Signature Healthcare Brockton Hospital, near Boston. “There is no such thing as a more respiratory season. It’s respiratory season year-round.”

A hospital in Plymouth, Mass., that had not transferred a patient to Dr. Mauro-Small’s hospital in a decade did so six times in 10 days recently, she said. The E.R. staff at Lowell General Hospital outside Boston needed to ask eight hospitals across Latest England whether or not they had room for an intubated 2-year-old, in keeping with patient charts reviewed by The Times. It transferred one other patient to the closest I.C.U. bed available — in Maine.

“Sooner or later, this was going to grow to be a crisis,” Dr. Mauro-Small said. “And here we’re.”

St. John Medical Center in Tulsa had been a community treasure for nearly a century when Ascension acquired it in 2013. The closure of the pediatric unit triggered opposition from each families and referring pediatricians.

Dr. Michael Stratton, a pediatrician in Muskogee, Okla., said Ascension St. John had been “the primary place to send a baby,” and its pediatric unit closure had been “such an enormous disservice to all of eastern Oklahoma.”

A spokeswoman for Ascension St. John, where Lachlan had been admitted to the I.C.U. 3 times before the closure, declined to be interviewed but said in an email that the closure was driven by a requirement for more adult beds. She also pointed to past statements that said the Children’s Hospital at Saint Francis was “greater than able to picking up the slack.”

A spokeswoman for the Children’s Hospital at Saint Francis said that it had occasionally reached full capability and that the staff transferred about 23 patients to other facilities, including in Arkansas, to date this 12 months.

The E.R. “was busy even prior to the closure of the St. John’s pediatric unit,” she said. Still, she said the hospital had not grow to be overburdened. “Volume is fairly consistent with what we normally see on a seasonal basis,” she said.

Some Oklahoman families with chronically in poor health children say they routinely drive to Memphis, St. Louis and Rochester, Minn., for care. The distances cause financial strain and, within the worst cases, cause them to forgo care, said Katy Kozhimannil, director of the University of Minnesota Rural Health Research Center.

For those in rural communities, pediatric closures have made travel to what Dr. Rauch calls “bread-and-butter pediatrics” untenable. Sixteen-year-old Johnny in Childress, Texas, needed to be home-schooled so he could travel eight hours to Dallas for dialysis treatment 3 times per week, in keeping with his doctor.

Jamaal Bets His Medicine, a 2-year-old with an autoimmune disease in Fort Kipp, Mont., routinely takes an 11-hour trip to Billings, Mont., to receive infusions, his mother, Patricia, said.

The steepest decline in pediatric inpatient beds was in rural regions, where large health systems acquired community hospitals and consolidated pediatrics to at least one campus.

Centering pediatric care in specialized centers can erode a neighborhood hospital’s ability to look after a critically in poor health child, doctors say.

“Children aren’t small adults,” said Dr. Meredith Volle, a pediatrician at Southern Illinois University School of Medicine in Springfield, In poor health., who routinely sees patients who travel from two to 3 hours away. The variety of pediatric beds in Illinois has declined, and 48 of its counties now don’t have any pediatrician in any respect.

“When nurses and respiratory therapists grow to be less comfortable with children’s cases, when the units don’t have child-sized equipment,” Dr. Volle said, “at a certain point, you actually shouldn’t treat kids anymore since you don’t treat them often enough to be good at it.”

Critically in poor health children are 4 times as more likely to die in hospitals and twice as more likely to die in trauma centers that scored low on a “pediatric readiness” test, in keeping with research. Just one-third of kids in a national research survey had access to an emergency department deemed highly “pediatric-ready,” and of those, nine out of 10 lived closer to a less-prepared one.

A parent who’s unaware of the wide variability, said Dr. Katherine Remick, the manager director of the National Pediatric Readiness Quality Initiative, “could make a split-second decision that changes their child’s fate.”

The Rutledge family lives in Broken Arrow, a sunny Tulsa suburb with a frozen custard shop and a dentistry called Super Smiles. Their front porch is home to potted succulents, an abandoned scooter and a 140-pound Great Dane named Thor.

But their lives are removed from unusual. The last time Lachlan needed to see an allergy specialist, his mother packed the automobile together with his nebulizer and medications for a 14-hour drive to Denver, leaving her husband, their two other sons and her mother, who was undergoing chemotherapy, for 2 weeks. Later, when doctors told her that Lachlan’s disorder gave the impression to be causing stomach ulcers — but that the only pediatric gastroenterologist at Saint Francis wasn’t available for months — she began planning a journey to Dallas.

On the September morning that Lachlan was in St. Francis struggling to breathe, the E.R. was so busy that Ms. Rutledge hooked him as much as a pulse oximeter herself, quieting the monitor’s settings so it wouldn’t frighten him each time his heart rate spiked.

“I do know you guys are exhausted at this hospital, and I get it,” she shouted, leaning over Lachlan’s bed to level her eyes with the attending physician on the opposite side. “But you is not going to send this child home so he can watch his own vitals drop.”

Lachlan was discharged from the E.R. after 10 hours with a course of steroids to fight the inflammation in his lungs. He sleeps in his parents’ bedroom so that they can check his oxygen levels and administer nebulizer treatments every few hours throughout the night.