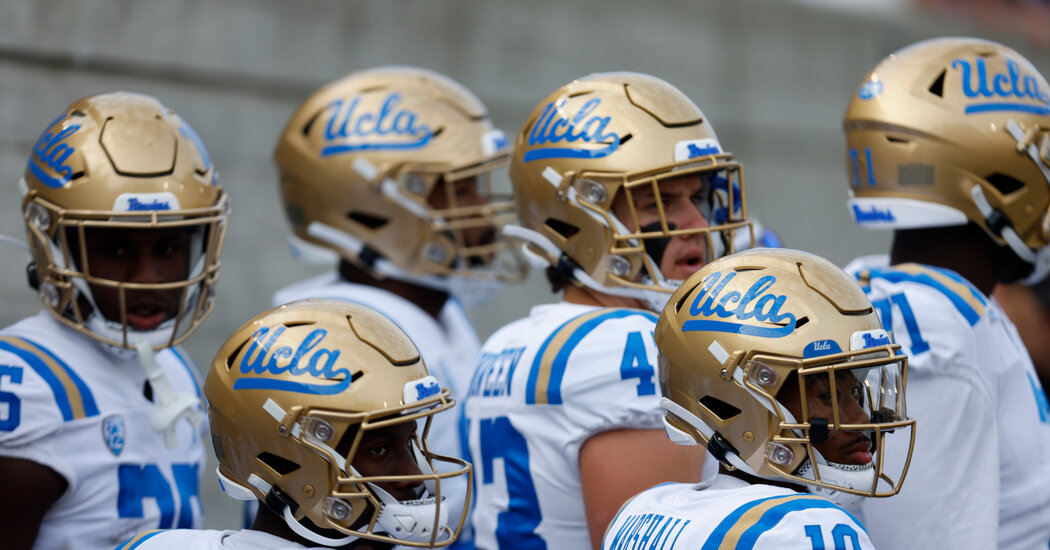 Inside hours of the stunning news last summer that U.C.L.A. was bolting the Pac-12 Conference, together with the University of Southern California, for a wealthy Big Ten media contract, emails began peppering the inbox of U.C.L.A.’s athletic director, Martin Jarmond.

“I’m glad my father didn’t live to see this,” wrote Brian Birkenstein, class of ’96, who didn’t miss a house football game as a student. “This move just screams of the hypocritical values that U.C.L.A. evidently has,” wrote Eugene Chiang, class of ’88, who added that he would not be a fan, a donor or an advocate. “I graduated from U.C.L.A. 50 years ago and have NEVER been ashamed of my alma mater … until today!” wrote Jerry Macy, class of ’72.

It was much the identical for the inbox of Chancellor Gene D. Block.

“It appears like the chasm between student and athlete just got even wider,” Tal Johnson, a U.C.L.A. parent, wrote to the chancellor. “Legacy and geography, and the connection with alums, is more necessary, in my opinion, than TV money,” wrote Sean J. Mulvihill, a physician who did his residency at U.C.L.A.

The nearly 4 dozen offended emails sent to the athletic director or the chancellor within the immediate aftermath of the June 30 announcement largely decried the move, sometimes lower than politely, as a shortsighted, tradition-ignoring money grab.

The sample size could also be too small to evaluate the move’s opposition. Still, it’s telling how few emails, obtained by The Latest York Times through a public records request, supported it.

The handful of notes congratulating Jarmond, the athletic director, appeared to be from U.C.L.A. employees or from people he had encountered in over a dozen years working within the Big Ten at Michigan State and Ohio State.

Because the University of California Board of Regents prepares to vote Wednesday on whether to dam U.C.L.A.’s move to the Big Ten, those few congratulatory emails Jarmond received appear to be instructive in one other way. Within the nearly six months for the reason that proposed move was announced, there has not been much visible enthusiasm for it.

In a survey of U.C.L.A. athletes conducted for the Regents, only 35 percent of the 111 respondents said they thought the move was an excellent idea. (Only about one in six athletes even responded to the survey.) Bill Walton, one in every of U.C.L.A.’s most famous former athletes, has urged the Regents to reject the move.

So has one other former U.C.L.A. athlete, the football player Ramogi Huma. As the manager director of the National College Players Association, an athlete advocacy group, he told the Regents in a letter last week that the increased travel to far-afield campuses in Pennsylvania, Maryland and Latest Jersey would place a greater burden on Black male athletes, whose graduation rates on the university are about 50 percent, compared with 73 percent for Black male students overall at U.C.L.A.

The move has also attracted the eye of Nancy Skinner, a state lawmaker who’s considering introducing laws that may put stricter limits on the time athletes at California schools spend practicing, playing and traveling for his or her sport.

So while there was a gradual stream of opposition, there has barely been a drip of organized public support for U.C.L.A.’s move — or distinguished athletes which have been boosters for it.

Unlike when, say, Rutgers joined the Big Ten nearly a decade ago, the executive fervor is less a few road to relevance — U.C.L.A.’s women’s soccer team recently captured the college’s a hundred and twentieth N.C.A.A. championship — than it’s financial pragmatism.

The increased revenue is a technique U.C.L.A., whose athletic department deficit ballooned to $103.1 million, in response to the college’s statement of revenues and expenses, can afford a broad-based athletic program that gets scant financial support from the university.

Block and Jarmond have been largely silent beyond addressing the Regents, sometimes privately, to make their case for the move. Block apologized to Ana Mari Cauce, the president of the University of Washington, for not providing advance notice and called the move “personally anguishing,” in response to a letter obtained by The Athletic through a public records request.

At a Sports Business Journal conference last week in Las Vegas, Jarmond urged college athletics administrators to do a “higher job of communication to individuals who don’t understand our business.”

Asked afterward why U.C.L.A. had not garnered much public support for the move, Jarmond declined to comment.

When the leap to the Big Ten was announced this summer, there was little indication that U.C.L.A. needed to marshal support. It was viewed as a fait accompli since chancellors within the University of California system, which has 10 campuses, have been given broad discretion in managing their campuses for many years.

However the Regents began to ask questions because U.C.L.A.’s departure would lead to a financial hit for a sister school, the University of California, Berkeley. Its revenue from a Pac-12 television contract can be reduced by hundreds of thousands of dollars since the conference can be losing the Los Angeles market.

It also didn’t help U.C.L.A. that most of the Regents — including Gov. Gavin Newsom — were upset about being kept in the dead of night on such a consequential matter.

Then, in August, the Regents were informed by their general counsel, Charles Robinson, that despite the fact that that they had delegated authority to the chancellors, that they had not relinquished it.

In subsequent meetings, in September and November, the Regents have pushed U.C.L.A. for answers on how membership within the Big Ten would help financially and the impact it will have on athletes’ health and academics. U.C.L.A. said it expected to reap $60 million to $70 million per yr in television revenue when it joined the Big Ten for the 2024-25 school yr, about double what it brings in from its membership within the Pac-12.

That annual revenue can be offset by about $10 million in recent costs for travel and dietary, academic and mental health support, the university said.

However the Regents have struggled to grasp what would occur if U.C.L.A. remained within the Pac-12. Though George Kliavkoff, the Pac-12 commissioner, has urged the Regents to dam U.C.L.A.’s move, he has not been in a position to close a television rights deal to offer them with a firm comparison.

(The Big 12 recently agreed to a media rights deal value $31.7 million per school per yr, which is seen as a loose goal for where the Pac-12 — with no presence within the Los Angeles market — figures to land.)

While the Pac-12 has been in negotiations with ESPN and Amazon, amongst others, there was belt-tightening across the industry because the yr involves a detailed.

Based on Nielsen Media Research, which tracks television rankings, ESPN and ESPN2 subscribers dropped 7 percent since January, while ESPNU declined 12 percent. The Fox Sports cable channels, FS1 and FS2, lost 6 percent and 11 percent of their subscribers. And the Big Ten Network, essentially the most widely distributed conference channel, lost 9 percent of its subscribers.

Kliavkoff expects the Pac-12 to finish its recent contract in the primary half of 2023.

Because the Regents have been collecting information, a lot of them have been hoping the issue will solve itself. One option they’re considering, but haven’t yet deliberated on, is to permit U.C.L.A. to depart but to require it to compensate Berkeley for lost revenue.

While the Regents have raised questions on whether U.C.L.A.’s exit creates recent problems while solving current ones, some on the board have expressed unease with reversing a call due to the precedent it will set.

Ultimately, even when the Regents leave Wednesday’s meeting having removed a final obstacle for U.C.L.A.’s move to the Big Ten, they might share a prevailing sentiment: little enthusiasm for it.