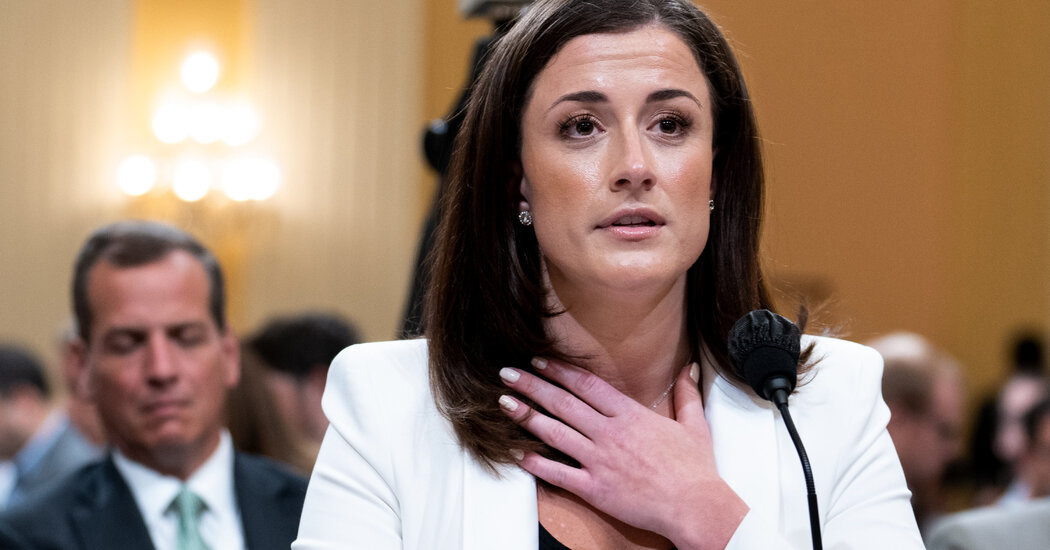 This week, a relaxed, even-toned conversation between two fastidiously dressed Republican women, Cassidy Hutchinson and Representative Liz Cheney, created some of the explosive and riveting television events of the last decade.

Americans were captivated listening to the testimony about President Donald J. Trump’s behavior on Jan. 6. But we were captivated visually, too, by the hundred tiny, but critical, decisions that had gone into each woman’s style selections. The whole lot — hair, makeup, jewelry, wardrobe and nail care — appeared to communicate calm, control and, especially, neutrality.

The witness’s outfit was a nonevent. Ms. Hutchinson, an aide within the Trump White House, wore a fitted white blazer over a scoop-neck black top; a tiny, jeweled circle pendant on a sequence near her neck; and small stud earrings. The look was studiously neutral, eschewing any hint of spectacle or flash. Flattering without being “fashion-y.” Mature but not matronly. Because the clothes were intended to vanish, and the cameras spent much of the time trained on her face, the audience was left largely to contemplate her grooming selections.

She wore her shoulder-length dark hair easily blown out with a slight flip on the ends. (In perhaps her only “tell” of nerves, she adjusted her hair several times.) She wore minimally visible makeup — what seemed to be light bronzer, but no discernible colours of lipstick or eye shadow. Her manicure was also a very colorless embellishment — a demure pearl white.

Viewers caught a glimpse of this manicure at certainly one of the hearing’s most dramatic moments: when Ms. Hutchinson recounted being told that Mr. Trump, enraged at being kept from joining his armed supporters, had allegedly lunged at his Secret Service agent’s throat. In explaining this, Ms. Hutchinson offered a discreet pantomime of the motion, placing her own hand frivolously on her clavicle.

That one moment encapsulated the startling power of Ms. Hutchinson’s appearance before the House select committee: She was telling a daunting story, but she unspooled her memories in probably the most reserved, unthreatening, visually calming way conceivable. Her demeanor and her look were at distinct odds with the small print of her testimony — and this disjunction itself, this striking contrast, threw her words in sharp relief, intensifying their impact.

Ms. Hutchinson’s measured demeanor and muted look mirrored that of her interlocutor, Ms. Cheney, the vice chairwoman of the committee. Throughout all of the hearings, nevertheless troubling the revelations, Ms. Cheney has maintained the identical unchanging facial features, tone of voice and level affect. (Against this, Representative Bennie G. Thompson, the committee chairman, permits himself moments of irony, even levity.)

She keeps her white-blond hair in a side-part style, with slight waves that look soft but never fall misplaced and even move in any respect. The effect is stalwart, unflappable, a more senior version of Ms. Hutchinson’s look. She has stuck to a series of jackets in neutral tones, her crystal blue spectacles, pearls and the Capitol Police lapel pin she wears in solidarity with the officers.

That each women selected neutral tones, and such restrained, muted, almost unremarkable outfits, seems intentional, inviting viewers to focus more on the words than on appearances, and leaving little room for anyone to criticize their selections. Ms. Hutchinson particularly will need to have known that her credibility hinged on the best way she can be perceived as she stepped into the national highlight the primary time.

Women’s selections in matter of dress and grooming are all the time more fraught than men’s. We now have so many more decisions to make (hair, makeup, jewelry, heel height, pants or skirts) and hence so many possible avenues of visual communication — and, in fact, miscommunication. And particularly for young women within the skilled world, the day by day task of constructing a have a look at once attractive and “serious” can feel like traversing a minefield.

Young women are also a primary goal of “beauty culture” and its vast array of products, techniques and dictates. Social media teems with 1000’s of tutorials on “reshaping one’s face” with contouring makeup, the best way to make eyes look greater, noses smaller, skin smoother. The general messages are clear but contradictory: “turn out to be an artist of the self,” “make yourself beautiful” and “do it imperceptibly.”

It’s a tall order — time-consuming, hard to disregard and subject to wide interpretation. And it’s especially hard for girls in politics. Some female politicians, like Representative Alexandria Ocasio-Cortez and Senator Kyrsten Sinema, play with arresting clothes, jewelry and daring makeup to make an announcement. Others have settled on their very own versions of a uniform. Vice President Kamala Harris has her Tahitian pearls and dark pantsuits; Senator Elizabeth Warren, her all-black outfits topped with soft, colourful jackets.

Most of the (often young and attractive) women of the Trump administration favored an overt, high-glam style, and we saw quite a lot of very long hair, dramatic false eyelashes, sheath dresses and stiletto pumps — a “beauty pageant” vibe said to be favored by the previous president.

On the hearing, Ms. Hutchinson’s image was distinctly different from that aesthetic. She dressed as if able to mix into the corridors of power, to do her job, to convey depth over surface (although she was noticeably telegenic).

Mr. Trump claimed to not know who Cassidy Hutchinson was, although she worked only a number of feet away from the Oval Office. Perhaps he didn’t know her. Perhaps she had a method less visible to him than that of other young women in his orbit. But all of us actually know her now. And the nation is unlikely to forget the day Cassidy Hutchinson, along with her precise, low-key style, told her disturbing story.