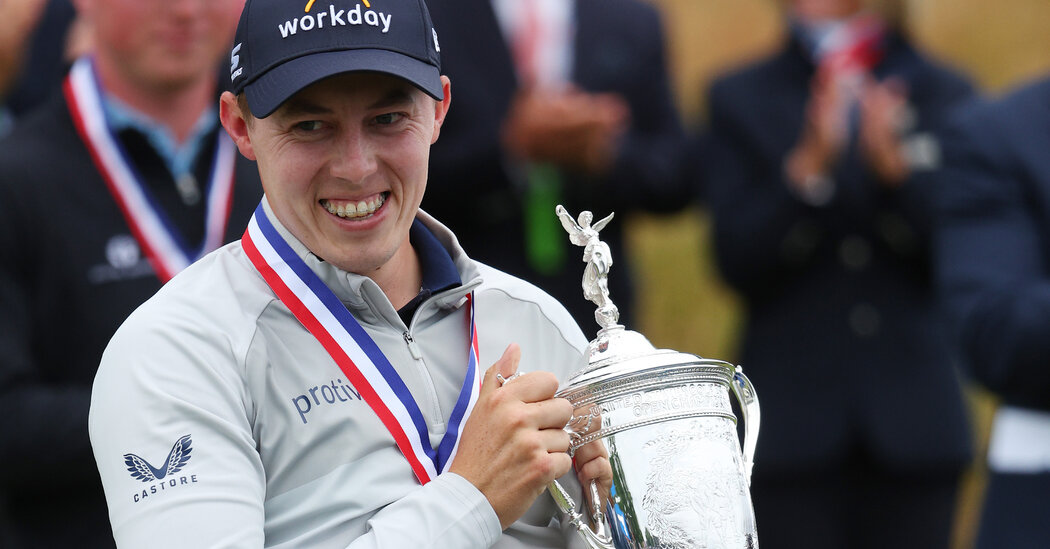 BROOKLINE, Mass. — This yr’s U.S. Open began because the setting for an unprecedented showdown between golfers who had remained loyal to the established PGA Tour and a breakaway pack of ex-colleagues who recently joined the brand new, rebel, Saudi-backed LIV Golf series. However the anticipated confrontation on the Country Club outside Boston fizzled in the primary round Thursday when golfers from each camps got along without friction.

By Sunday, the continued split in men’s skilled golf was hardly settled, but it surely was overshadowed by a riveting final-round shootout amongst three of the game’s best young players: Matt Fitzpatrick, 27, of England, and the Americans Will Zalatoris, 25, and Scottie Scheffler, 25.

In the long run, Fitzpatrick, who won the U.S. Amateur on the Country Club nine years ago, survived the crucible, claiming his first win at a serious golf championship and on the PGA Tour with a fourth-round 68 that made him six under par for the tournament. Fitzpatrick earned $3.15 million for the victory.

Zalatoris and Scheffler were one stroke back.

The pressure-filled fourth round got here all the way down to the last two holes with Fitzpatrick leading by one stroke over Zalatoris, his playing partner. He held a two-stroke advantage over Scheffler, who had teed off two groups before Fitzpatrick and Zalatoris, the third-round leaders.

It got here all the way down to the 444-yard, par-4 18th hole, a signature hole of the Country Club. Zalatoris drilled his tee shot onto the golf green and hit a second shot to inside 14 feet. Fitzpatrick yanked his tee shot left right into a yawning bunker, but from 156 yards he struck a crisp iron that bounded onto the green and stopped 17 feet from the outlet.

Fitzpatrick then confidently two-putted for par. Zalatoris’s birdie putt to tie Fitzpatrick and arrange a playoff drifted lower than an inch to the left of the outlet.

While Saturday’s third round was played in gusting winds that made the greens firm and fast — and produced only seven rounds under par — Sunday’s conditions were benign compared. The Country Club is a fearsome course in any weather, however the forecast had been for cold temperatures and moderately strong winds that presaged one other tough day for the most effective golfers on this planet. As a substitute, the wind died down and cloud cover made for a pleasing day within the 60s. Most of all, an overnight storm dumped 1 / 4 inch of rain on the club’s small greens, which slowed them down and made putting less tricky.

In consequence, the sphere might be more aggressive, especially if a tee shot landed on the golf green. In some cases, nonetheless, it may need given the golfers false confidence as costly mistakes were still commonplace.

Zalatoris began the day tied for the lead with Fitzpatrick at 4 under par but faltered early when he three-putted from 67 feet below the second hole for a bogey. Then, on the following hole, he sent his second shot right into a greenside bunker, which led to a second successive bogey. But Zalatoris rarely appeared rattled. He steadied himself with three consecutive pars and on the par-3, 158-yard sixth hole, he drilled his tee shot 2 feet from the flag for a straightforward birdie. Zalatoris’s approach shot to the par-4 seventh green from 164 yards skipped onto the green and rolled just an inch left of the outlet. His tap-in birdie brought him back to 4 under par for the round. When Zalatoris sank a 17-foot birdie putt on the ninth hole, he made the turn at five under par, only one stroke behind Fitzpatrick.

After a gradual par on the tenth hole, Zalatoris played it smart and protected on the downhill par-3 eleventh hole, which was playing just 108 yards on Sunday (with a dastardly difficult back left hole location). Zalatoris left his tee shot below the outlet and rolled in an 18-foot putt for birdie to maneuver to 6 under par, which gave him the tournament lead on the time. But a missed fairway off the twelfth tee led to a layup in need of the green and ultimately a bogey.

After watching Zalatoris fall back to 5 under par, Fitzpatrick, who was tied for second place entering the ultimate round of last month’s P.G.A. Championship, attacked. Standing over a 48-foot putt for birdie on the thirteenth hole, he rolled a snaking, left-to-right putt slowly but confidently into the outlet to tie Zalatoris.

Like everyone at the highest of the leaderboard on Sunday, Fitzpatrick’s round was uneven and unpredictable. He began strong with three pars and two birdies in his opening five holes. But his tee shot on the par-3 sixth hole was excessively long, sailing 66 feet past the outlet, which led to a bogey. Fitzpatrick rallied with a cushty birdie on the par-5 eighth but like many on Sunday he couldn’t sustain the positive momentum. He discovered the tenth hole when a lengthy second shot was in need of the green and led to a different bogey. Then the tiny eleventh tormented Fitzpatrick as a 7-foot par putt skidded past the outlet for a second successive bogey.

Scheffler appeared to take a commanding lead within the tournament on Saturday with a sparkling front nine, but then gave all of it back with a string of bogeys on the back nine. On Sunday, Scheffler carved up the front nine again, with 4 birdies in his first six holes. Scheffler’s approach shots to the small, devilish greens were precise and his work on the crafty putting surfaces was superb as three of his 4 early birdie putts were converted from outside 12 feet.

But then Scheffler’s putting stroke deserted him as he needed three putts to get his ball in the outlet from 38 feet on the tenth hole. Worse, on the diabolical eleventh hole, Scheffler’s par putt from 7 feet rimmed the outlet and lipped out for a second successive three-putt bogey that dropped him to 4 under par for the tournament. Scheffler stayed within the battle though with five successive pars from the twelfth through the sixteenth holes.

Hideki Matsuyama posted the most effective early scores when he shot a five-under-par 65 with five birdies and no bogeys to complete the championship at three under par. Matsuyama needed just 25 putts in his final round.