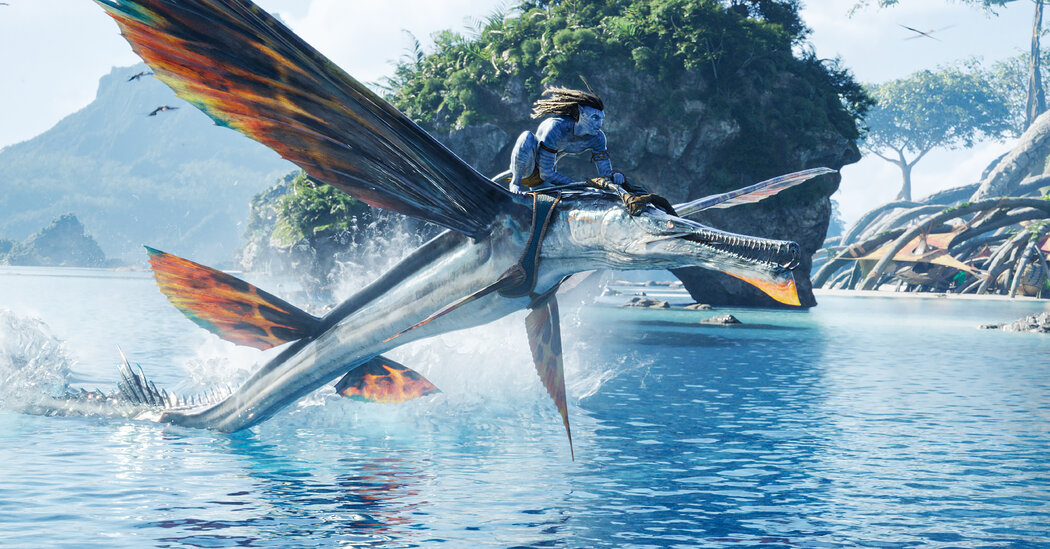 With a running time of greater than three hours — about 10 minutes shorter than “Jeanne Dielman, 23, Quai du Commerce, 1080 Bruxelles,” by recent acclamation the best movie of all time — “The Way of Water” is overloaded with character and incident. The ultimate stretch, which feels by some means longer than the remainder of it, runs aground in motion movie bombast, and suggests that even a pop auteur as inventive and resourceful as Cameron could have run out of ideas relating to climactic fight sequences. There are loads of those, within the air and underwater, fistic and fiery, sad and rousing, nearly every considered one of which can remind you of stuff you’ve seen a dozen times before.

That’s too bad, because much of the center of “The Way of Water” restores the latent promise of newness — no small accomplishment in an era of wearying franchise overkill. Afraid that Quaritch and his men will bring slaughter to the forest, Jake and Neytiri seek the protection of Ronal (Kate Winslet) and Tonowari (Cliff Curtis), chieftains of a reef-dwelling Na’vi clan.

The differences among the many Na’vi — physical in addition to cultural — add an interesting recent dimension to the anthropology of Pandora, and to the film’s aesthetic palette. The viewer discovers this variety in the corporate of the younger characters, especially Kiri and Lo’ak. Their adaptation to recent surroundings — being teased for his or her skinny tails and clumsy arms, getting in fights and making recent friends — gives the movie the buoyant, high-spirited sincerity of young-adult fiction.

Cameron’s embrace of the idealism of adolescence, of the capability for moral outrage in addition to wonder, is the emotional heart of the movie. You’re feeling it in a horrifying scene of tulkun slaughter that aspires to the awful, stirring sublimity of the last chapters of “Moby-Dick,” and in addition within the restlessness of Lo’ak, Spider and Kiri as they fight to determine their roles. The following sequels, I think, will give them more time for that, but may encumber them with more baggage.

I’m curious, and inclined — as I used to be in 2009 — to provide this grand, muddled project the good thing about the doubt. Cameron’s ambitions are as sincere as they’re self-contradictory. He wants to beat the world within the name of the underdog, to have fun nature by way of essentially the most extravagant artifice, and to make all the things recent feel old again.