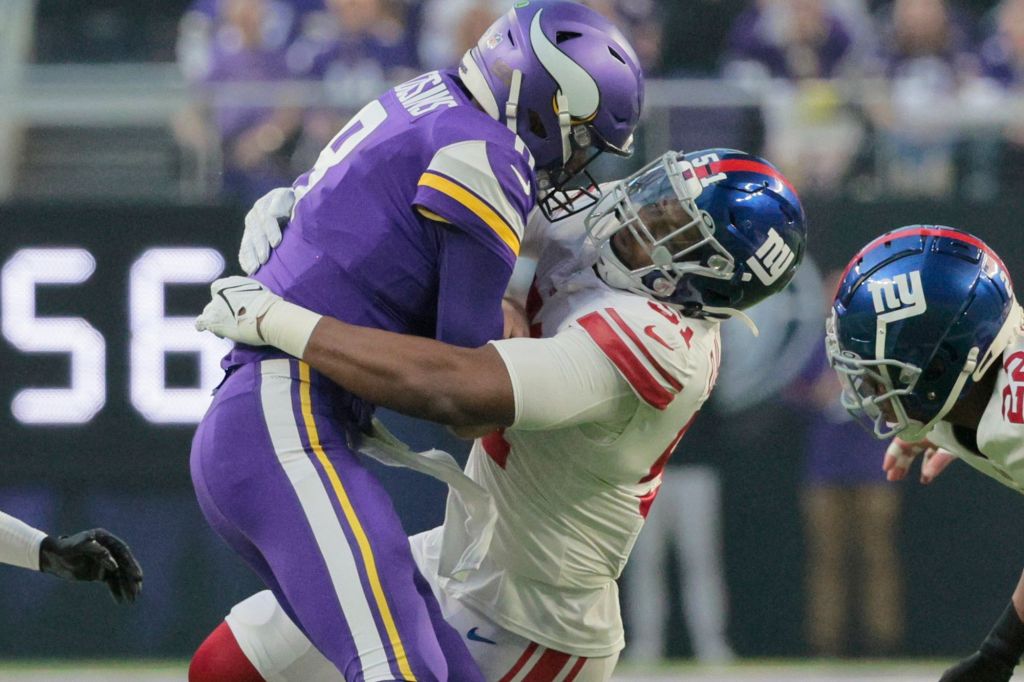 MINNEAPOLIS — Azeez Ojulari cannot stay healthy and on the sphere.

The talented pass-rushing outside linebacker again was not capable of finish a game. He was forced out of the Giants’ 31-24 playoff victory over the Vikings with a quad injury and didn’t return. This actually puts into query his availability for Saturday’s NFC divisional playoff game against the Eagles in Philadelphia.

“It’s just so terrible,” Ojulari said afterward. “I can’t ever finish the sport. I’m so frustrated. It’s just so tough. I’m completely satisfied we won, though. Gives me one other opportunity.”

Ojulari had been coping with a sprained ankle he got here away with within the Christmas Eve loss to the Vikings. He was held out of the regular-season finale and deemed a full-go for his first profession playoff game, but he couldn’t make it to halftime. Jihad Ward moved into the spot Ojulari vacated, costing the Giants the pass-rush prowess Ojulari often provides.

Ojulari was hurt pursing the ball on a trick play by the Vikings, with receiver Justin Jefferson trying a throwback pass to quarterback Kirk Cousins.

“I’m OK,” Ojulari said. “Sore. Kirk, I hit him. I feel like he kneed me straight within the quad. I attempted to stand up. Thigh bruise, probably. Get treatment [Monday] and see the severity of it.”

How about Kenny Golladay? The veteran wide receiver, coming off a brutal second season with the Giants, actually made a contribution regardless that he was not targeted and thus didn’t catch a single pass. He did make a key block, though. With the sport tied at 24, Saquon Barkley caught a swing pass from Daniel Jones and picked up 10 yards — thanks largely to Golladay absolutely obliterating safety Duke Shelley.

“Got to provide a variety of respect for KG,” Barkley said. “Obviously the season hasn’t gone how he would have wanted but he’s a very good player and I respect the grit and the grind, when things aren’t going your way … in an important drive making a giant block.’’

Coach Brian Daboll liked what he saw from Golladay on the play.

“He’s a competitor,’’ Daboll said. “He’s kept his head down and worked as hard as he can and when his number is known as, he’s tried to do the very best job he can.’’

Safety Jason Pinnock was carted off the sphere with 7:42 remaining after he was hurt covering a kickoff return with an abdomen injury. He was checked out at an area hospital and was capable of fly back with the team. … Rookie Kayvon Thibodeaux was shaken up making a tackle on Dalvin Cook within the third quarter and exited holding his right arm and hand. He only missed a number of snaps and was back on the sphere. … The rotation at left guard continued. Nick Gates began and Ben Bredeson got here in on the third offensive series.

The Giants went into the sport completely injury-free and in consequence, all seven players they designated as inactive were healthy scratches: CB Rodarius Williams, RB Jashaun Corbin, LB Micah McFadden, G Wyatt Davis, G Jack Anderson, WR Kalil Pimpleton and DT Henry Mondeaux. McFadden began seven games as a rookie however the ascension of Landon Collins into an inside linebacker role and the signing of Jarrad Davis led to more change at a position that was in flux all season.