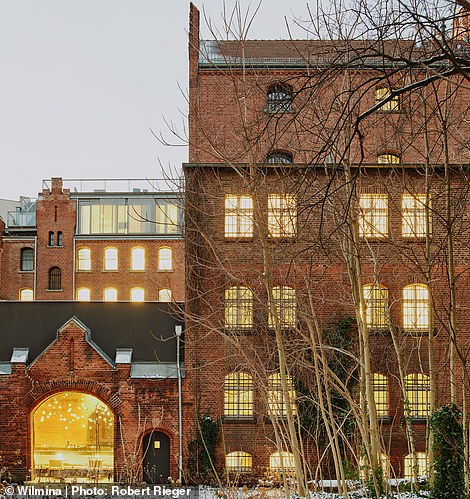 Opened this 12 months, the family-run Hotel Wilmina (pictured) in Berlin was formerly a women’s prison and a courthouse

Eye-catching photos reveal the remarkable transformation of a jail in Berlin right into a luxury hotel.

The unique prison yard, which was at one time the primary point of arrival at the ladies’s prison, has been became a restaurant, and the criminal court that adjoined the complex is now a gallery space. On the rear staircase a cell stays in its original state to serve ‘as a spot of remembrance’ – it is going to be open for hotel guests to go to upon request within the near future.

The prison and court compound, designed by architects Adolf Bruckner and Eduard Furstenau, dates back to 1896. It’s steeped in German history – the section that lies behind the complex was used as a jail for resistance fighters during World War II.

After the prison closed in 1985, a piece of the property went on to function an archive for the land registry. 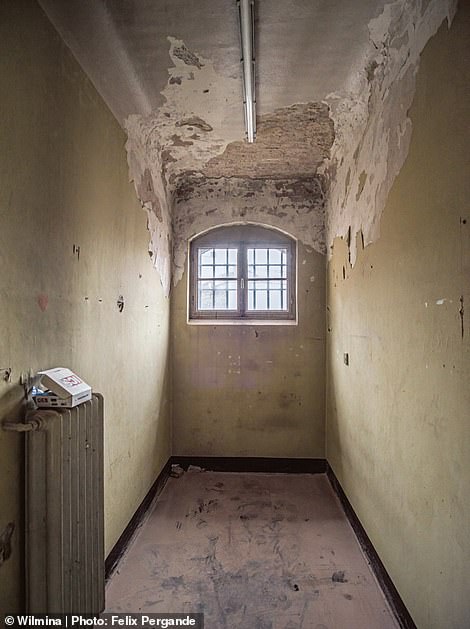 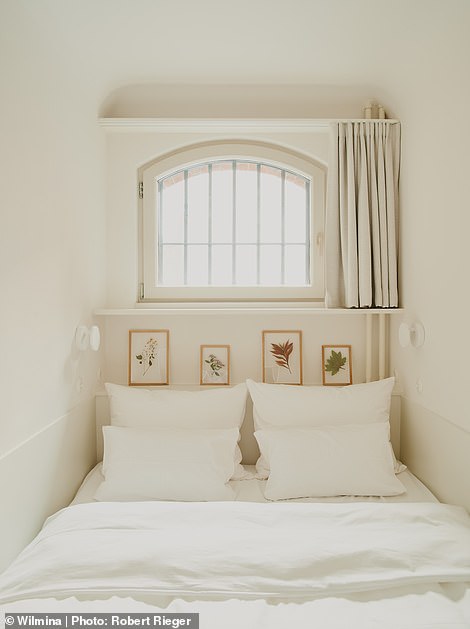 Hotel Wilmina’s guest rooms have been created from former prison cells. Within the prison, one cell (left) was so small that it covered lower than six square metres (64 sq ft). On the correct is certainly one of the 11-sq-m (118-sq-ft) ‘Cosy Alcoves’ on the hotel – the smallest room type available

The positioning, nevertheless, had been ‘inaccessible and forgotten’ for a while before it was transformed right into a 44-room hotel by Berlin-based Gruntuch Ernst Architects.

Recent materials were utilized in the conversion and existing elements of the prison were also ‘reused and punctiliously reconfigured’.

To enter the hotel, visitors must cross the central courtyard where ‘tall trees, shrubs, hedges and climbing plants have spread unhindered over several many years.’

Once inside, guests are greeted by the ‘vivid, high-ceilinged’ lobby and an ‘inviting fireplace lounge’. 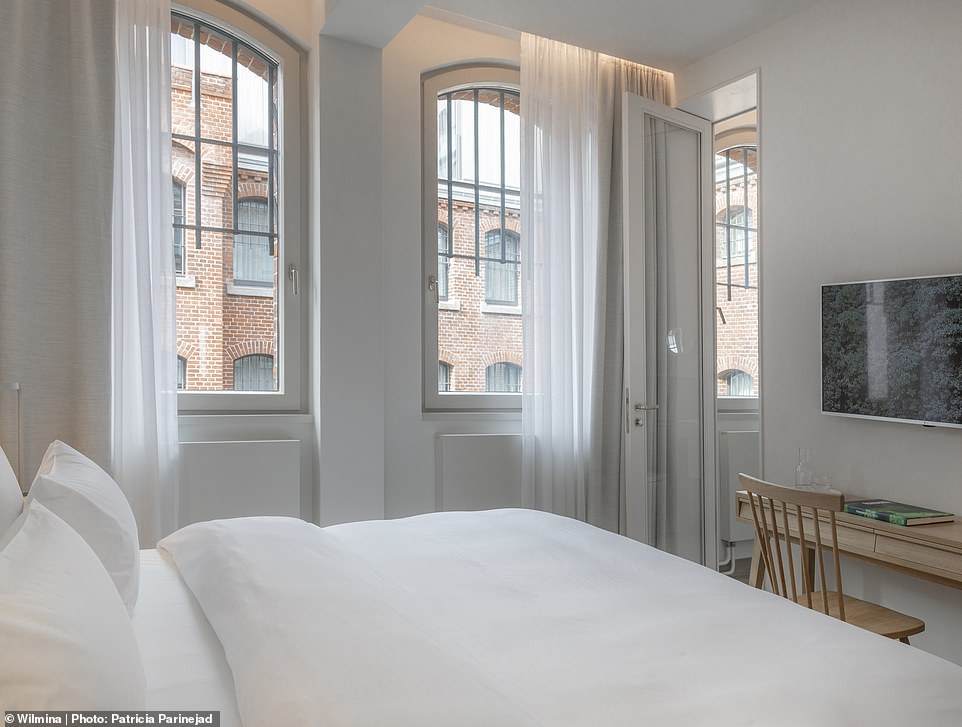 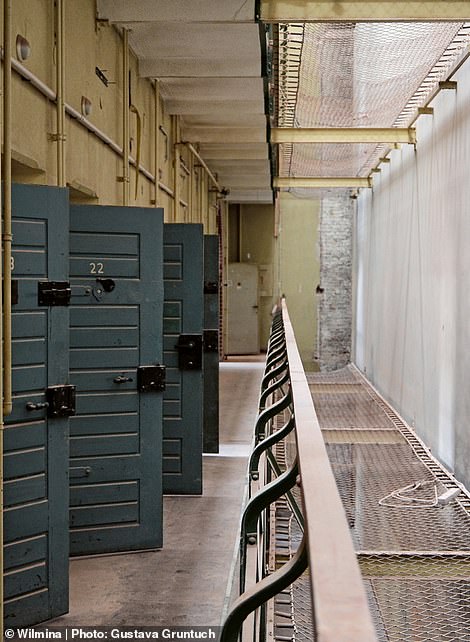 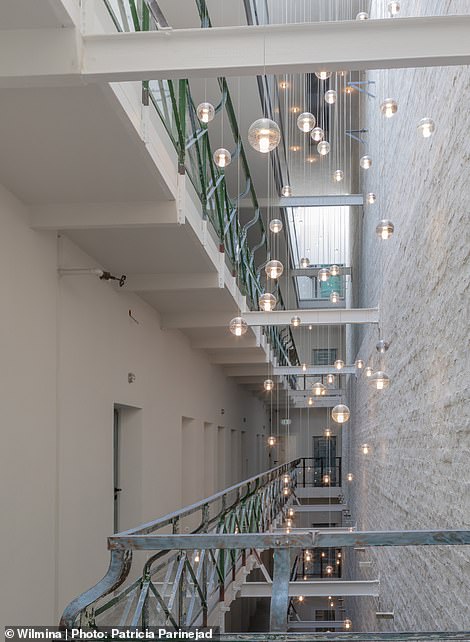 The prison cell wing (pictured left prior to the restoration), which lies at the center of the complex, has been transformed into the hotel’s atrium. Light spills into the space via skylights within the ceiling 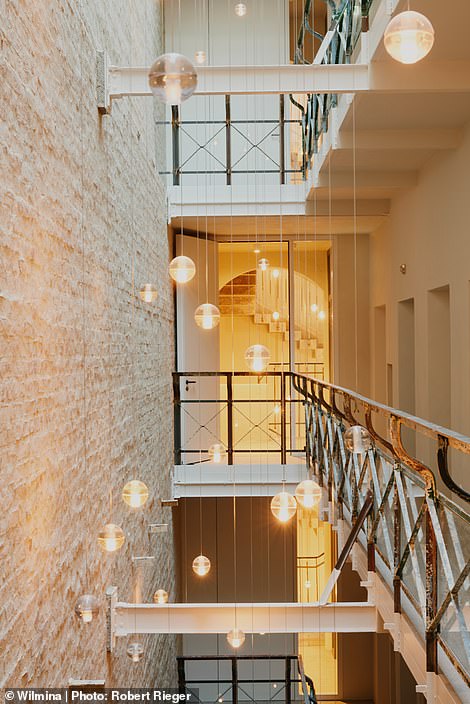 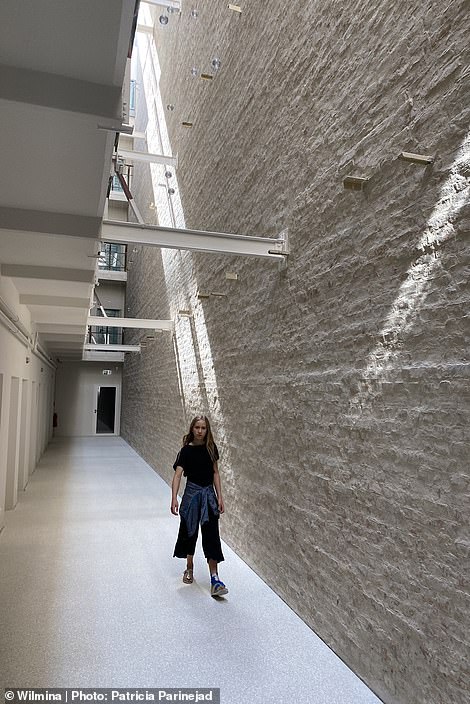 Within the atrium, glass pendant lights are suspended from the ceiling and walkways result in each cell-wing room

A staircase brings guests as much as the five-level atrium, which lies in the previous cell wing in the center of the constructing.

Here, light spills in from skylights, glass pendant lights are suspended from the ceiling, and wrought-iron balustrades line the walkways that result in each cell-wing room.

In the unique prison, one cell was so small that it covered lower than six square metres (64 sq ft). To create extra space within the restoration, dividers between cells were opened as much as create interconnecting rooms.

The guest rooms range in size from 11-sq-m (118-sq-ft) Cosy Alcoves to the ‘spacious’ 75-sq-m (807-sq-ft) Garden Loft, which is situated in the previous prisoner assembly room. 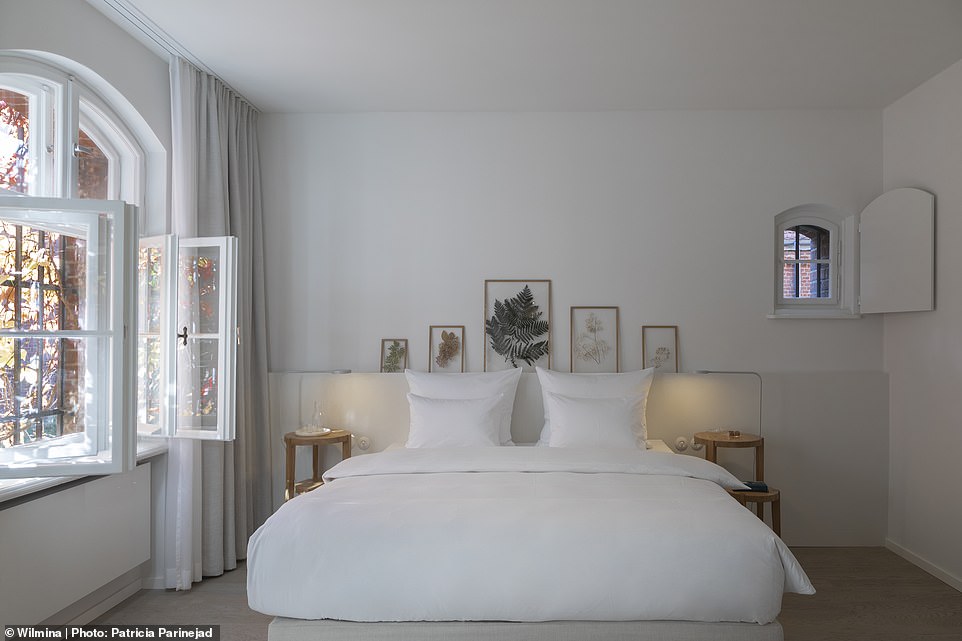 Pictured is a Classic Garden View room. The hotel says that the architects have transformed the premises ‘from a jail right into a place of longing’ 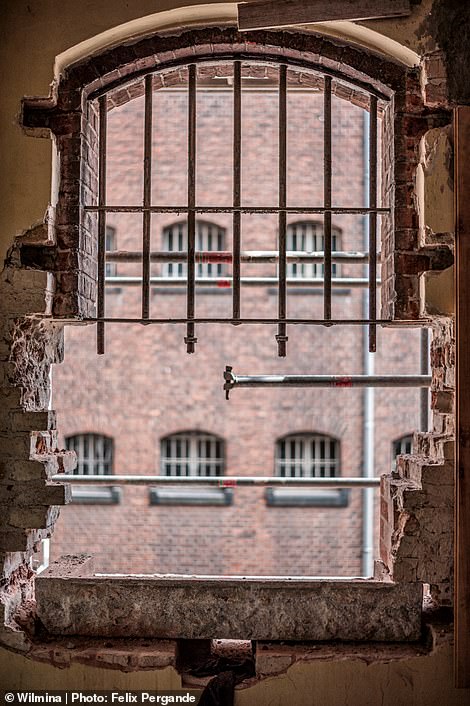 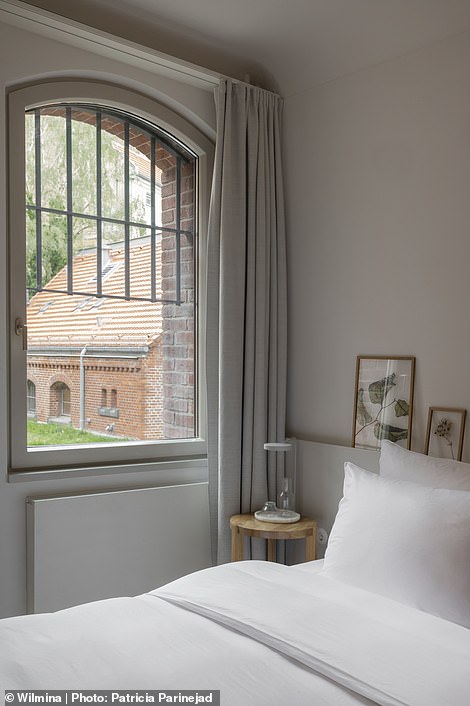 Some prison cell windows were previously too high to supply a view of the surface – these windows have now been prolonged downwards. The unique prison bars remain intact on the windows of the hotel. On the correct is a Classic room type 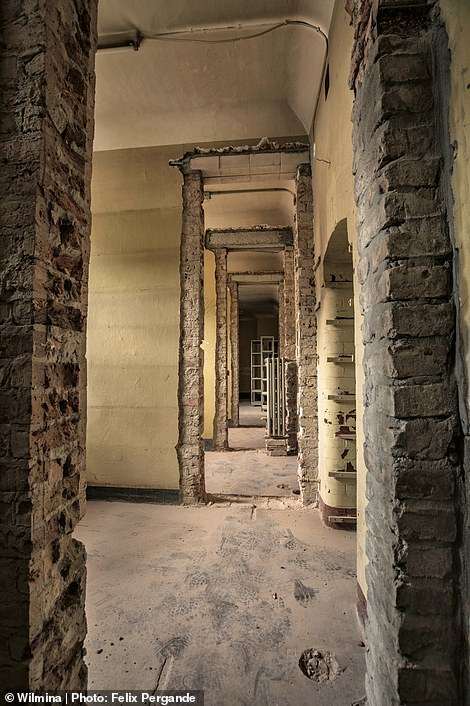 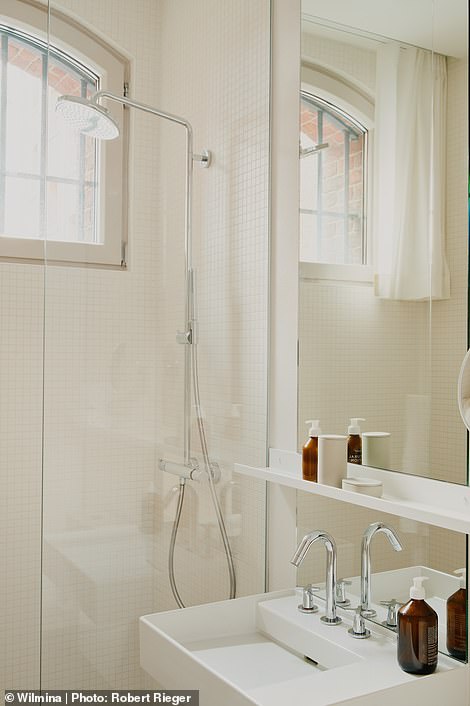 Within the restoration, the partitions between cells were opened up floor-to-ceiling to create interconnecting rooms. Pictured on the correct is the ensuite bathroom in a ‘Cosy Alcove’ guest room

Some prison cell windows were previously too high to supply a view of the surface – these windows have now been prolonged downwards, though the unique bars remain intact.

Each room – none of that are exactly alike – combines ‘historical authenticity with modern luxury and luxury’, decorated in ‘soothing’ light colors and soft textures.

Moving up the constructing, the newly-built penthouse floor lies on the fifth storey, and its guest rooms boast floor-to-ceiling windows draped in curtains constructed from an ‘elegant shimmering veil’ of ‘fantastic metal chains’.

On the very top, there’s a roof terrace that appears down on the roof gardens on the lower levels of the complex. Other facilities include a bar, library, spa and gym.

The hotel’s Lovis Restaurant, meanwhile, is ‘sheltered by lush gardens and interflowing courtyards’. Chef Sophia Rudolph is on the helm, with menu items including pink-roasted saddle of lamb with gremolata jus, and crispy onsen egg (a form of Japanese slow-cooked egg) with Caesar dressing. 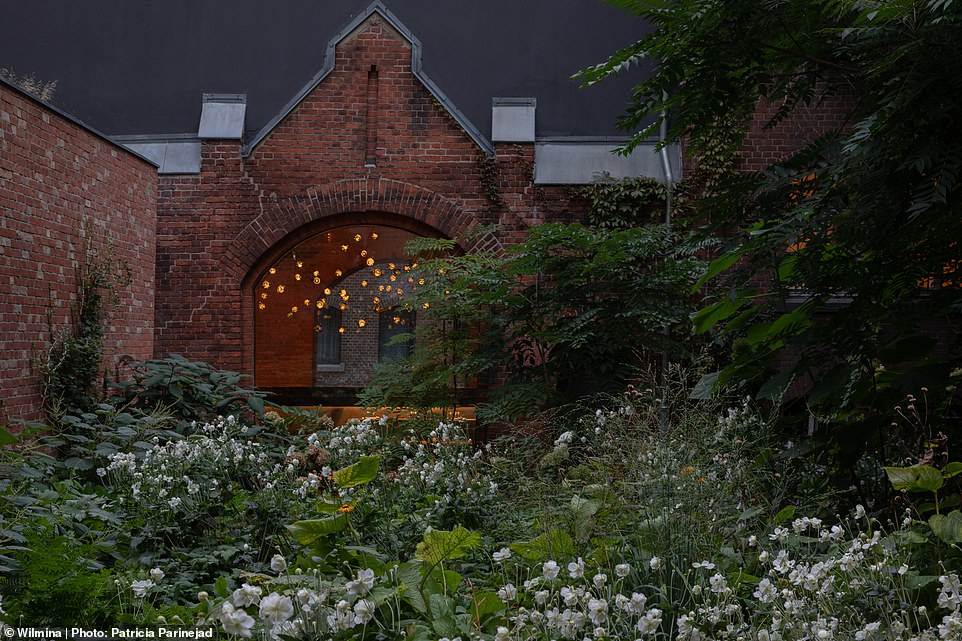 The hotel’s Lovis Restaurant (above), situated in the unique prison yard, is ‘sheltered by lush gardens and interflowing courtyards’ 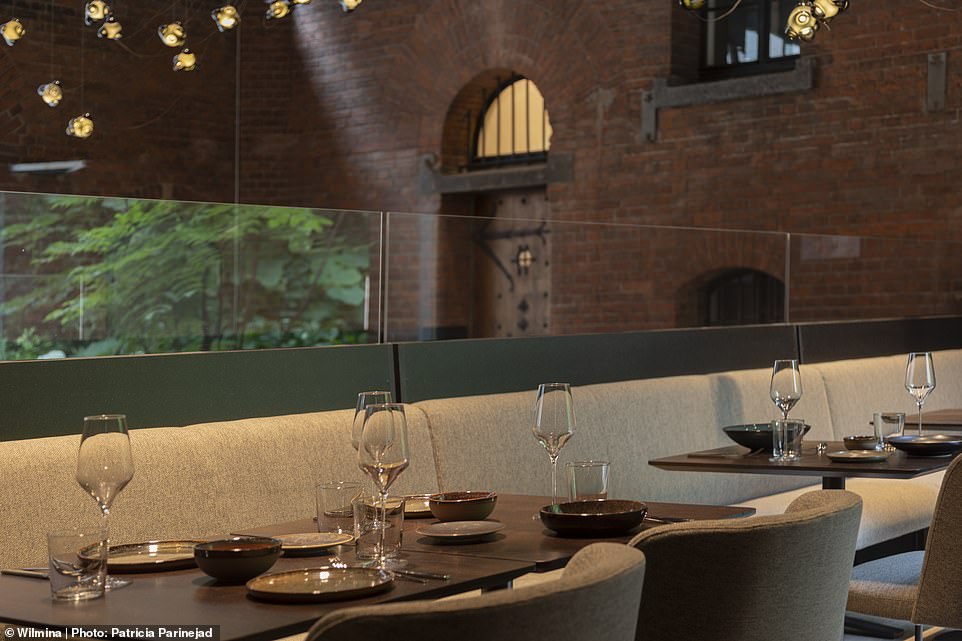 Chef Sophia Rudolph is on the helm within the Lovis Restaurant, where menu items include pink-roasted saddle of lamb with gremolata jus

A press release from the hotel says: ‘The Berlin architects Gruntuch Ernst have devoted lots of energy to this place. In a sensitive dialogue with the history they succeeded in radically transforming it from a jail right into a place of longing with a hotel and restaurant. The method involved reversing the spatial configuration and its meaning in order that an anti-social space can develop into an inviting place – a gem for a deliberately chosen retreat.’

The redesign won the BDA Prize Berlin 2021, an award that celebrates refurbishments. The jury said: ‘The transformation of the previous women‘s prison into the Hotel Wilmina by Gruntuch Ernst is characterised by its sensitive design and atmospheric density.’