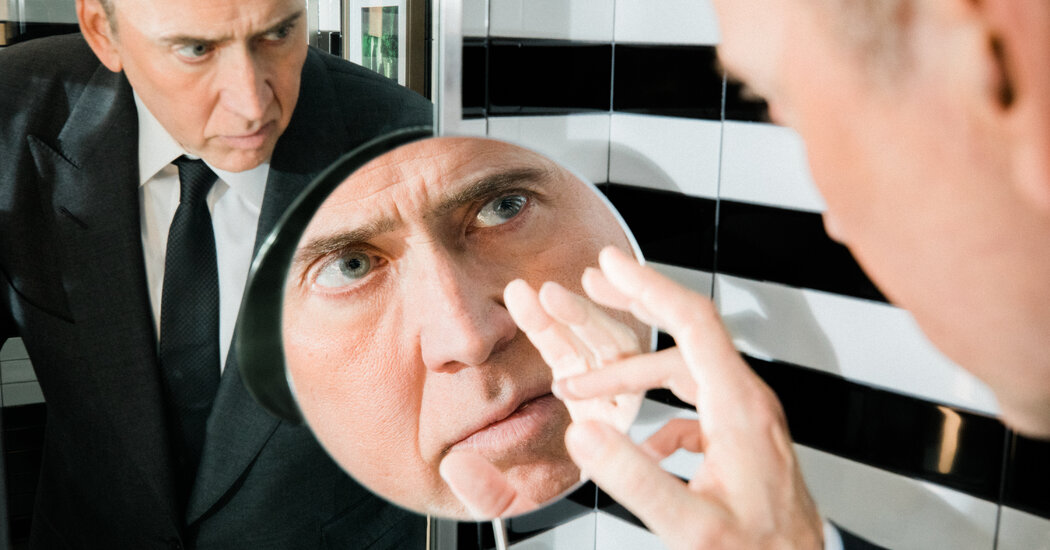 Culture involves life through a progression of ideas and pictures: Artists create works, and our photographers then capture these creators and their offerings — in turn creating photography that shares with us moments of intimacy we wouldn’t otherwise witness. Over the past 12 months, photo editors at The Latest York Times have commissioned hundreds of photographs of the movie stars, choreographers, opera singers, musicians and artists who made memorable contributions to the cultural world.

In a single frame by Chantal Anderson, the actor Caleb Landry Jones sips from a coffee mug at his kitchen counter, last night’s dishes piled high within the sink, as sunlight pours in from the window above. In one other, Rosie Marks gives us an inside have a look at Charo being Charo: understanding at home, full hair and makeup, in a gym frozen in time. In Michael Tyrone Delaney’s photograph of Awol Erizku, the artist stands before his work, his gaze set on his toddler. It’s a picture that speaks to each his personal relationship along with his child and his art’s relationship to her.

Together, these photographs capture a narrative a few 12 months in the humanities, constructing a group of evolving scenes and inner worlds. We asked among the photographers to debate the intentions behind these frames and the stories they saw inside them. Now that the 12 months is coming to an in depth, take yet one more look back at how we saw culture this 12 months. — JOLIE RUBEN, senior photo editor

I wish to take into consideration this portrait of Anthony Roth Costanzo within the spirit of early stage plays, a type of dollar-store version of world constructing, where rudimentary technique of expression invite the smoke and mirrors to be an lively a part of the world slightly than obscure it. I created a stage set as a field of flowers in a perpetual state of bending within the wind. The twine that suspends the flowers was each practical but additionally meant to dispel any illusion of the wind being real; showing my cards, because it were.— Erik Tanner

The best way that Kat Edmonson draped her arm over Kenneth Ard’s, the best way that his body lay back on this stool, the feel of the stool, the colour of their costumes, the lighting overhead and the fog from the smoke machine. As a queer person, it felt like a metaphor for a way it feels to walk out of the closet: It’s like an exhale, an aha moment where every part has meaning, feels connective and plush, but only should you allow yourself to experience it in that way. — Justin J Wee

I brought the flowers as a prop for Beanie. Yellow roses, as featured in “Funny Girl” the movie, starring Barbra Streisand. I desired to evoke the thought of a torch being passed. — OK McCausland

As a former dancer and D’Angelo fan, I used to be inspired by these two worlds of dance and R&B. I only asked Kyle if he could improvise a bit of bit for me. Soon enough I used to be within the midst of an intimate solo performance within the BAM lobby. — Lelanie Foster

I desired to capture the slight chaos of Charo at home on her compound. There may be so much happening within the frame: the factitious grass carpet, the rusty weights, the old TV, a missing piece of the mirror — after which her in the center, wearing a vivid yellow outfit right out of an ’80s workout video, with hair and makeup that may very well be taken right out of one among her sold-out Vegas shows. She insisted we stay after the shoot and served up several cheese and meat platters. — Rosie Marks

I watched “Dune” 3 times before heading to this shoot, taking notes on my yellow legal pad every time. The sound engineers did such an incredible job immersing the audience on this alien world, I wanted the pictures to no less than try and do the identical thing, like we were reporting from the surface of Arrakis. — Peter Fisher

As a substitute of attempting to separate different elements within the frame, sometimes I would like my photograph’s different parts to attach and flow together to create shapes and features. The neck of the bass guitar meets the circle of the bass drum, and Melanie Charles’s foot connects with the bass, which forms a diagonal line with Jonathan Michel’s finger. Melanie’s front room was inundated with music, with instruments. You get the sense that there’s not much separating her life from her music. — Sinna Nasseri

Walking into Awol Erizku’s studio is like walking into his mind. It’s a big warehouse, full of striking imagery and sculptures in progress. He asked to get one photo along with his daughter, Iris. A whole lot of his work is made along with his daughter in mind. For me, this image embodies the themes of legacy constructing and cultivation of Black imagination. — Michael Tyrone Delaney

I had about 10 minutes with Nicolas Cage in a Manhattan hotel. The story was about his newest movie, which has a meta quality to it: Nic plays himself at different stages of his life. I assumed a mirror would represent that well. The side of his face is the foreground, and there’s also the lesser foreground of his hand. The center ground shows his circular reflection while the background is one other reflection of Nic. And there’s an additional background beyond that. The depth of this frame is a giant a part of its power. — Sinna Nasseri

Once I met her, Ethel Cain was living in a small house in a small town somewhere in Alabama. It was a complete time warp with no obvious signs of modernity — video tapes, crocheted table settings, wood paneled partitions, quilts. On this photo, we were in Ethel’s bedroom, where she sleeps and records, the microphone just just a few feet from the bed. We were talking about her childhood within the church. She was lying down, and I used to be on my knees beside her with the camera, a pious sight in and of itself. — Irina Rozovsky

Considered one of my favorite ways to make photographs is to be out on the streets and on the planet; I really like playing off juxtaposition and probability encounters. Even the streets know that Michael Che is PURE GENIE-US! — Andre D. Wagner

Each morning in Los Angeles, there’s typically a layer of fog (the “marine layer”) that clouds sunlight. We were incredibly lucky the morning of this shoot — there was no fog, only direct, beautiful California sunlight. The sunshine was also low enough within the sky to create an exquisite shadow across half of Janie Taylor’s body. I asked her to bop in a way that felt reflective of her work, and she or he gave a lot expression and movement on this light. — Thea Traff

For this story I embedded myself with Latest York City’s birders — people who find themselves obsessive about tracking birds, while the remainder of us just go about our lives. I wanted to point out that difference in a single photo, so I split the frame by holding binoculars to the highest half of my lens, which I focused on a red-tailed hawk, while the underside half reveals a person on the bottom just walking, unaware of the magnificent creature above him and the fandom surrounding town’s birds. — Sinna Nasseri

Once I was a child growing up in Baltimore, I used to be lucky enough to have a bunch of queer friends. We called ourselves “The Pridelights.” The three people on this image, Terry, Michael, and Von, were among the many core members of the group and, in some ways, the core of my childhood. The composition is a nod to the enduring “Destiny Fulfilled” album cover, an album that was so central to us when it was released. We fought consistently about who in our group was Beyoncé (Von and me), Kelly (Michael) and Michelle (Terry). There are almost no images of us together after we were children. Taking a look at this image now, it feels corrective. — Gioncarlo Valentine

It is sort of inconceivable to distill the experience of Heizer’s magnum opus “City” in a single frame. From dusk to dawn, I had the rare opportunity to wander the immense space, allowing the sunshine to be my guide. Standing within the bitter cold, I made a handful of exposures around 10 seconds long. Seeing “City” under moonlight made me consider how humans have been constructing mysterious structures on this planet for hundreds of years, many in relation to the heavens above. — Todd Heisler

What I really like about Abbi Jacobson is how relatable the characters she plays are — you actually feel like her and are friends along with her from watching her. Once I came upon we were going to be taking photos in L.A., I assumed of Art’s Delicatessen & Restaurant as the right place to fulfill up. It’s a family-owned spot you return to over and once again with friends. There’s an intimacy and history there that I wanted in the pictures. — Chantal Anderson

Wolfgang Tillmans and I shot this couple melting into one viewer before a photograph in his MoMA survey at the identical time, he on his iPhone and me with my camera. I’m guessing his pic is healthier. — Daniel Arnold

Gisèle Vienne had given me a tour of the home, and this room was right away my favorite. The sunshine through the dirty windows, her mother’s sculptures, the dried plants, the ground. This was taken toward the tip of the shoot so she had been dancing for some time, and it was terribly hot outside. I couldn’t tell she was sweating a lot, though the flash revealed it. That’s when it began to be truly interesting. She was letting go, and I used to be finally becoming invisible. — Sam Hellmann

Toward the tip of my time with the group, I got here back into the darkened conference room to see them arranged in a loose circle as they shared stories. I’d technically finished photographing them, but they were so immersed in conversation and used to my presence. This particular photograph, of Lorraine O’Grady holding court, ended up being my favorite. — Elliott Jerome Brown Jr.

It’s tough to pose two people in a dynamic way after they’re inclined to simply stand or sit side by side facing the camera. Claire Danes and Jesse Eisenberg play a recently divorced couple within the show, so I got here to set with the thought to pose them as in the event that they were embracing or slow-dancing, in a pose that felt reflective of their characters. — Thea Traff