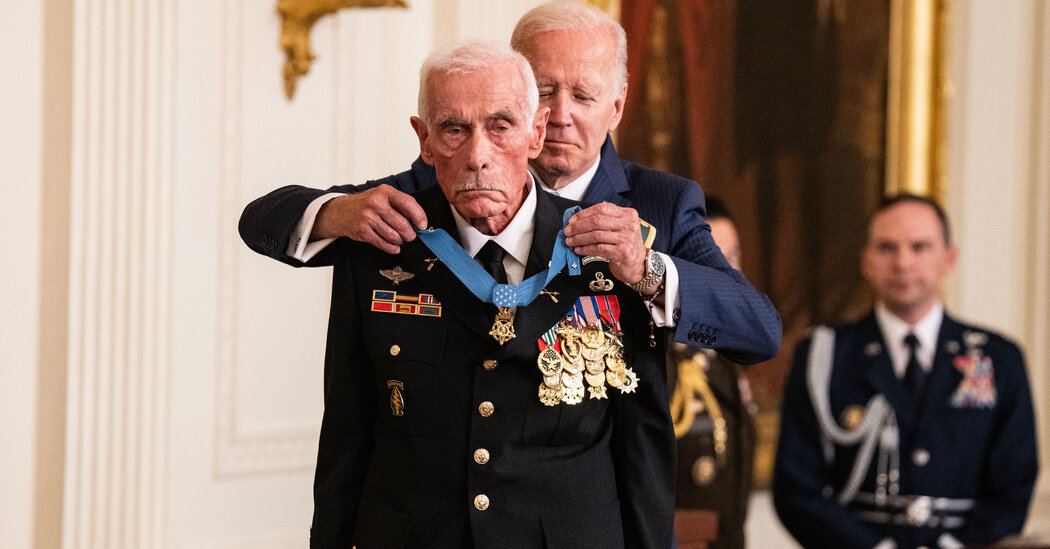 Dennis M. Fujii, an Army specialist, was a crew chief of a helicopter ambulance that was shot down in Laos in 1971, landing in the course of a firefight. Rescue helicopters were unable to get to the wounded Mr. Fujii, who later waved off more attempts as too dangerous, Mr. Biden told the audience on Tuesday. He stayed to are likely to other wounded soldiers for 2 days, and when the rescue helicopter was finally in a position to retrieve him, it too was shot down about 4 miles away, stranding him for 2 more days.

“Specialist Fujii downplayed his own contributions and honored the talents of the Allied Vietnamese troops he fought with, simply saying, I quote, ‘I like my job. I wish to help other individuals who need assistance on the market,’” Mr. Biden said after recounting his story. “It’s amazing.”

John J. Duffy, an Army major, repeatedly risked his life in 1972 to direct airstrikes against the enemy during an assault on the eleventh Airborne Battalion, Mr. Biden said. The president said Mr. Duffy remained behind, fighting the enemy, as the bottom was overrun and was the last person to evacuate, saving one last soldier who was shot within the foot and had fallen out of a helicopter because it took off. Mr. Duffy jumped out and helped the soldier back onto the helicopter.

Mr. Biden said Mr. Duffy served three tours in Vietnam and later became successful writer, once being nominated for a Pulitzer Prize for his poetry.

“He’s the definition of a warrior poet,” the president said.

Mr. Biden said the 4 awards on Tuesday were the results of a congressionally mandated review of the actions of Asian Americans, Native Americans and Pacific Islanders through the Korean and Vietnam wars.

“Truthfully, it’s been a protracted journey to today for those heroes and their families,” Mr. Biden said. “And greater than 50 years have passed — 50 years — for the reason that jungles of Vietnam where as young men these soldiers first proved their mettle.”