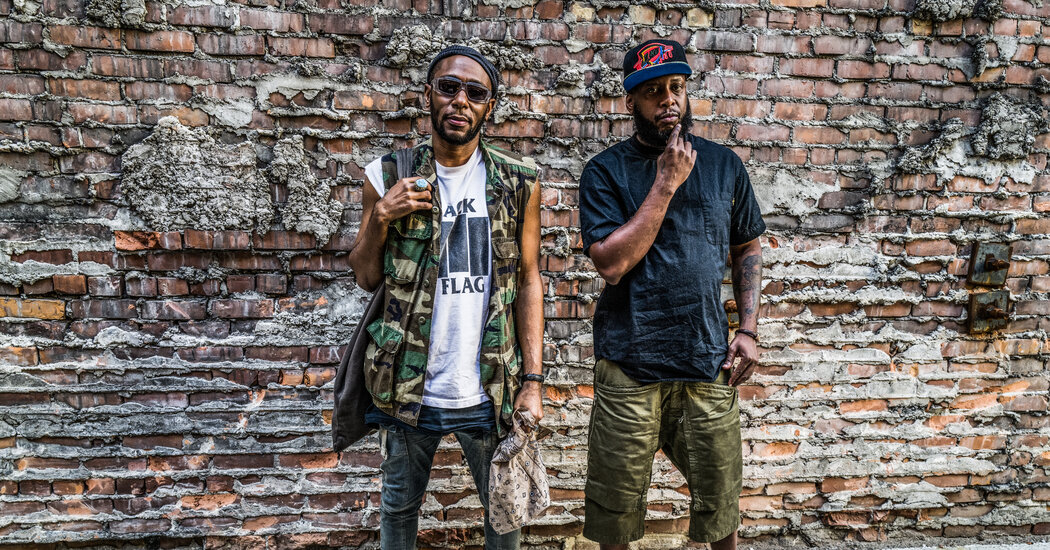 Talib Kweli and Yasiin Bey (formerly generally known as Mos Def) have reunited as Black Star — 24 years after their first and only previous full album together — with “No Fear of Time,” abetted by a really perfect alternative of producer: the crate-digging, funk-loving Madlib. A lot of the recent album is exclusive to the subscription podcast app Luminary, however the opening track, “O.G.” — “On God” — is on YouTube. Over an insistent bass line and swelling organ chords, the rapping is equal parts boasting and worship, insisting “the time is relative, ’cause the reality is everlasting.” Each rappers juggle mortality and persistence, rightfully flaunting their very own “Encyclopaedia Britannica flow,” mixing Brooklyn pride and reggae references (and samples from “The Ruler” by Gregory Isaacs), sounding self-congratulatory but still determined to instruct. JON PARELES

Probably the most soulful voice in “Vegas” — by far — is the sample from Big Mama Thornton, rasping “You ain’t nothin’ but a” from “Hound Dog,” the song that Elvis Presley would latch onto. “Hound Dog” was a couple of materialist masquerading as a sweetheart, and the rapping and multitracked vocal harmonies of Doja Cat’s “Vegas” — from the soundtrack to Baz Lurhmann’s “Elvis” — update it to the lifetime of a Twenty first-century star: “Sittin’ courtside along with your arm around me.” The underlying three chords are a classic blues structure; Doja Cat borrows their archetypal power. PARELES

Carly Rae Jepsen’s shiny, daring pop takes an impressionistic activate her recent single “Western Wind,” thanks partially to production from Rostam Batmanglij. A hypnotic beat and Jepsen’s entranced, closed-eyes vocals make the entire thing sound like a pastoral reverie — an intriguing recent direction for her. “First bloom, you understand it’s spring/Reminding me love that it’s all connected,” Jepsen sings dreamily. The solar energy is powerful with this one. LINDSAY ZOLADZ

Holly Humberstone, 22, is the present opening act on Olivia Rodrigo’s Sour Tour, and the 2 share a penchant for emotionally resonant songwriting and music that appears like whatever was on the radio shortly before they were born. “Sleep Tight,” which Humberstone co-wrote with the 1975 frontman Matty Healy and her longtime collaborator Rob Milton, is a tale of mixed emotions and that gray area between pals and lovers, set to rushing acoustic guitar chords that conjure ’90s pop-rock. “Oh my God, I’ve done it again, I almost killed our friendship,” Humberstone sings. Her delivery is directly as casually conversational as a text message and as shyly secret as an internal monologue. ZOLADZ

Lady Gaga is possibly the one contemporary pop star who could convincingly cover Berlin’s “Take My Breath Away” and Kenny Loggins’s “Danger Zone,” so it’s fitting that her theme from the upcoming “Top Gun: Maverick” channels slightly little bit of each. “Hold My Hand” is as bombastic and romantic as any of her torch songs from the soundtrack for “A Star Is Born,” however it’s also punched up with soaring electric guitar and gigantic ’80s drums that sound like they were recorded in an airplane hangar. “So cry tonight, but don’t you let go of my hand,” she belts as if her life trusted it, pulling off gloriously earnest pastiche like only Gaga can. ZOLADZ

Danielle Balbuena, the singer and rapper who records as 070 Shake, overdubs her voice right into a cascading chorale in “Web,” a cryptic call for private contact and honesty. “This thing isn’t working/Let’s be here in person,” she chants. “I would like to get through to you.” Perhaps the song is a response to too many Zoom meetings; it’s a stunning response. PARELES

Confessions of need and uncertainty result in monumental choruses within the songs on Sharon Van Etten’s recent album, “We’ve Been Going About This All Incorrect,” which ponder learn how to reconcile the lifetime of a performing artist with motherhood, relationships and self-realization. A humble acoustic guitar strum starts “Come Back,” as a tremulous-voiced Van Etten muses about “Subtle moments of past/What a wondering time.” However the chorus arrives in an enormous wall of sound — drums, keyboards, guitars, vocal harmonies in cavernous reverb — as Van Etten longs for a return to being “wild and unsure/And naked and pure.” PARELES

With Kathleen Hanna of Bikini Kill exhorting, “Put your finger within the socket!,” “Mirrorball” is the primary blast of post-punk mayhem from “Land Trust,” a profit album for North East Farmers of Color, which is acquiring land for Indigenous and minority farmers. Throughout the pandemic, Bikini Kill’s current guitarist, Erica Dawn Lyle, and drum tech, Vice Cooler, collaborated with multiple generations of feminist rockers; together with Hanna, the pioneering riot grrrl, the album — due June 3 — draws on members of the Raincoats, the Breeders, Deerhoof, Slant 6, Palberta and the Linda Lindas. While “Mirrorball” flings sarcastic late-capitalism advice like “Stay true to your personal brand,” stomping drums and cranked-up guitars brook no nonsense. PARELES

The songwriter Leyla McCalla played banjo, guitar and cello within the Carolina Chocolate Drops and Our Native Daughters; her parents were Haitian immigrants, and he or she hung out together with her grandmother in Haiti. Her recent album, “Breaking the Thermometer,” began as a music-theater work commissioned by Duke University, which acquired the archives of Radio Haiti and has placed them online. The album mingles Haitian songs and McCalla’s own songs with snippets of broadcasts and interviews, examining Haiti’s history of exploitation, revolution, dictatorship and turmoil. “Le Bal Est Fini” (“The Party Is Over”) is predicated on an editorial by a Radio Haiti journalist in 1980, the 12 months the federal government shut the station down. The music is upbeat, with syncopated undercurrents of rara carnival rhythms. Meanwhile the lyrics, in Haitian Creole, lash out at anti-democratic forces: “Arbitrary, illegal, anti-Constitutional.” PARELES

For ASAP Rocky, “bitch” is an endearment. “D.M.B.” — “Dat’s my bitch” — is a love song; the video clip features glimpses of Rihanna, his girlfriend. “Bitch” can also be a usefully percussive syllable in a multilayered production that continuously warps itself with woozy crosscurrents of pride, defensiveness, affection and machismo. Rocky raps and sings through “D.M.B.” with a shifting flow, and for all his aggression, he sounds genuinely affectionate. PARELES

The London-based artist Tirzah makes love songs within the abstract: free-flowing and amorphous meditations on intimacy and interconnection. As on her 2021 album “Colourgrade,” the primary record she made since becoming a mother, the unconditional relationship she’s singing about on her hazy recent single, “Ribs,” might be between a parent and child, though it has a welcoming universality about it too. “You see things I can’t see, you see love and in between,” Tirzah sings openheartedly. “Hold onto me.” ZOLADZ

“Latest Scars” is an eerie, enveloping benediction from Glasser, a.k.a. the songwriter, singer and producer Cameron Mesirow. It begins with sparse, bell-like, electronically altered and harmonically ambiguous piano notes, a counterpoint as Glasser sustains and repeats a sort of mantra: “Try to stay with the love/there’s no room for shame.” Eventually, orchestral strings swell round her and her vocals grow right into a choir as she moves on to a terse but by some means encouraging thought: “We stock through life.” PARELES