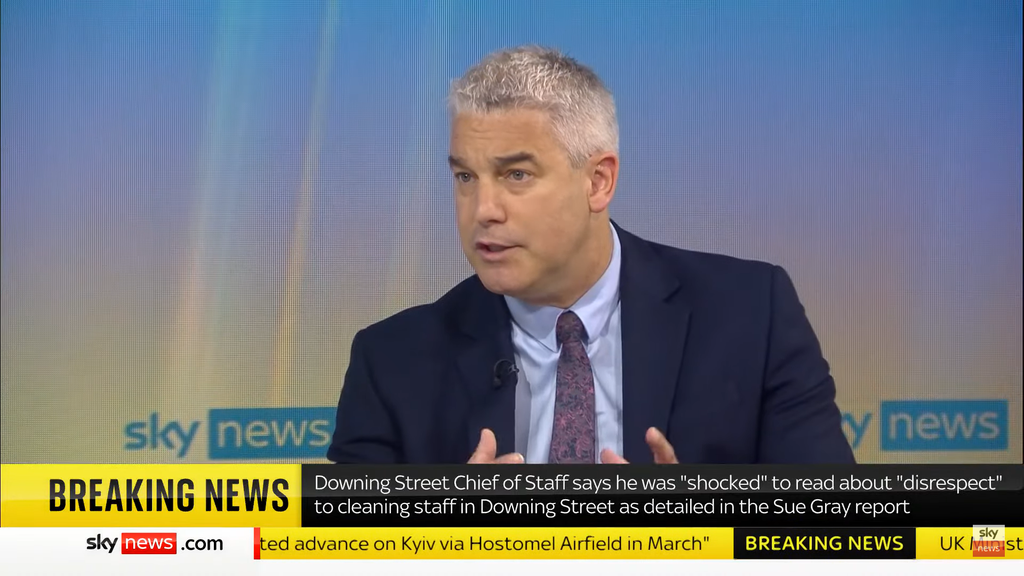 Boris Johnson’s right-hand man has denied the prime minister is a liar and described him as a person of “honour”.

No 10 chief of staff Stephen Barclay said the PM was not aware that various events he attended in Downing Street developed into drunken lockdown-breaching parties and was “shocked” to read the main points in Sue Gray’s report on Wednesday.

The report blasted a “failure of leadership” at No 10 because it set out how officials held “wine-time Friday” events at a time when Britons were ordered to remain at home and avoid social contact. It revealed how they drank until the early hours and listed incidents of revellers vomiting and fighting and being rude to security staff and cleaners who objected.

Chatting with Sky News, Mr Barclay agreed it was “heartbreaking” that Britons were unable to say farewell to dying family members during lockdown.

But he insisted that the situation was not comparable to the prime minister raising a toast to departing colleagues at leaving drinks events in No 10, because the people involved were already working in “tight-knit” groups on the Covid response.

After Mr Johnson yesterday resisted calls to resign for misleading parliament, Mr Barclay was asked directly by interviewer Kay Burley: “Does the PM have honour?”

Burley followed up: “Does he tell lies?”

Barclay replied: “No, he doesn’t.”

But Labour’s Lisa Nandy told BBC1’s Breakfast she was “horrified” by the image painted by Ms Gray of behaviour in No 10 under Mr Johnson’s stewardship.

“It makes very uncomfortable reading,” said the shadow levelling up secretary. “There have been celebration parties, leaving parties, garden parties, staff being told to go away by the back door so that they weren’t seen drunk.

“There is a rot that runs all through all of this, however it’s quite clear from yesterday that the rot starts at the highest and what we’ve is a main minister who won’t take responsibility and Conservative MPs who largely – with a couple of exceptions – won’t do the appropriate thing.”