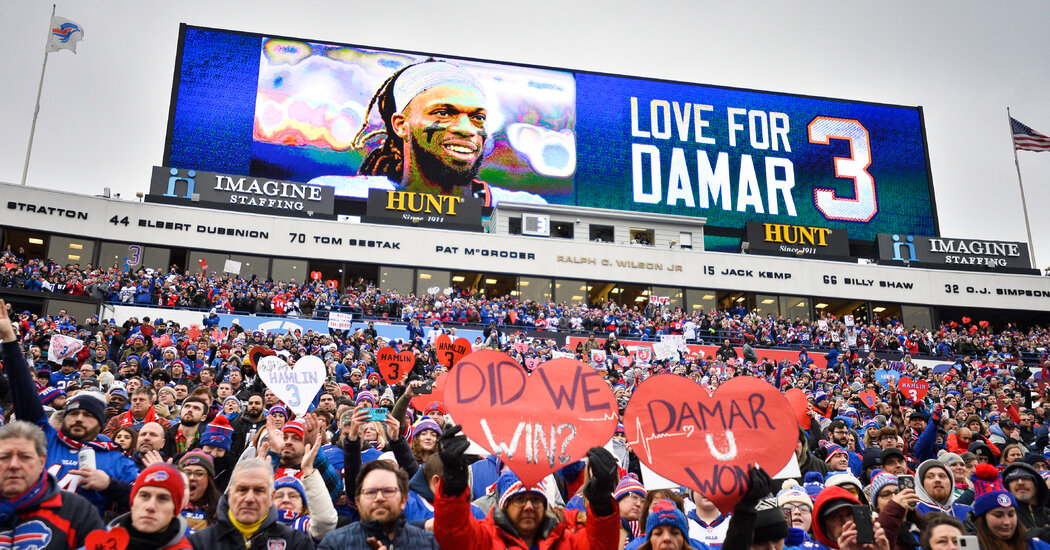 “We saw this man go down — I’m getting emotional serious about it now — and I’ve been emotional about it ever since,” said Markowski, who had crafted a homemade No. 3 out of blue felt and pinned it to her coat. “I said, ‘I would like to go to that football game.’ I never desired to go to a football game, never in my life.”

Within the Bills’ team store, a clerk said it was the primary time he had ever seen the jersey of Hamlin, a little-known second-year player, sold amid the opposite inventory. The No. 3 shirts appeared on a rack behind a security rope, where one other worker enforced a one-per-customer limit.

Fans within the parking lots nearby tailgated next to signs that read, “Prayers for Damar,” “Love for Damar” and “We Are Damar.” One other sign propped up on the bed of a pickup truck read, “Learn CPR, since you never know” — a reference to the procedures that helped save Hamlin’s life.

“It’s very emotional, and it must be,” said Lisa Bubel, 44, a firefighter emergency medical technician from Rochester, N.Y., who was wearing Bills-themed sandals and who had made the CPR sign. “It’s a heartwarming tragedy, I assume, is one strategy to put it. It’s united everybody. And in a world where we see bad news on a regular basis, it has been great to see people come together as human beings.”

A number of hours before the sport, Hamlin’s account posted a greeting on Twitter. His condition has been improving in increments over the past several days, and the account showed him in his hospital bed on the University of Cincinnati Medical Center.

“Nothing I Want More Than To Be Running Out That Tunnel With My Brothers,” wrote Hamlin, who also posted an image of himself along with his parents, Nina and Mario. “God Using Me In A Different Way Today. Tell Someone You Love Them Today!”

The emotionally charged atmosphere only grew as game time neared.

Players curled their fingers into hearts, and fans lovingly returned the gesture.