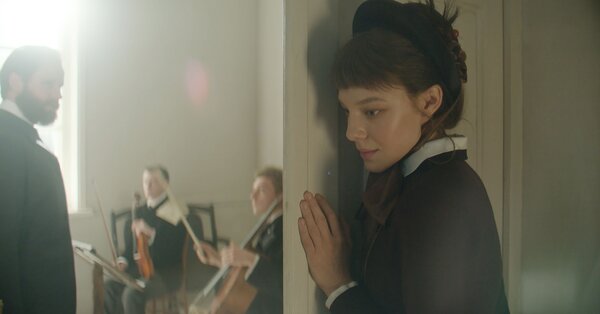 CANNES, France — When Jeff Nichols first attended the Cannes Film Festival, he was a 21-year-old college student interning on the event’s American Pavilion. His days were mostly spent waiting tables, but now and again, Nichols got his hands on a premiere ticket, donned a tuxedo that his mother had bought him, and took a seat high within the balcony of the Grand Théâtre Lumière. Each time he landed there, he felt he was on the summit of every thing he desired to do in life.

Since then, Nichols has come back to the festival with two movies he directed: “Take Shelter,” starring Michael Shannon and Jessica Chastain, and the Matthew McConaughey drama “Mud.” This 12 months, he’ll function one in all the jurors deciding the winner of the Palme d’Or. At a jury news conference on Tuesday, the now 43-year-old Nichols declared his invitation to be a full-circle honor.

“I can guarantee you that I’m going to observe every one in all these movies with the identical enthusiasm as once I was 21,” Nichols said.

Jeff Nichols is one in all the jurors deciding the winner of this 12 months’s Palme d’Or.Credit…Eric Gaillard/Reuters

In its seventy fifth 12 months, an invite to the Cannes Film Festival stays highly coveted, even when the movie industry has modified irrevocably within the 20 years since Nichols first attended. Since French theaters lobby the festival to exclude streaming movies from competition, Cannes sometimes looks as if a throwback: a spot where the massive screen is so revered that you just’d hardly know the surface world consumes art movies on much smaller screens, if in any respect.

Essentially the most significant concession Cannes has made to changing viewer habits is the abundance of billboards and banners along the Croisette, the town’s fundamental boulevard, touting the short-form video app TikTok, an official partner for this 12 months’s festival. Does that union suggest that the festival is hedging its cinematic bets, or is it simply a savvy way for Cannes to succeed in a user base of over a billion young users?

Possibly it’s a reminder that Cannes has more to sell than simply art movies, even when a few of those entries — just like the Palme d’Or winner “Parasite,” or last 12 months’s hit “The Worst Person within the World” — go on to strike a cultural chord. Cannes sells glamour, too, in the shape of red-carpet pictures which are beamed across the globe. And the picture-perfect backdrop of the Croisette, where that red carpet is ready off by an azure summer sky and an excellent richer blue sea, also offers the right launchpad for studio blockbusters: “Top Gun: Maverick” and Baz Luhrmann’s glitzy “Elvis” will debut at Cannes this 12 months alongside indies like Kelly Reichardt’s “Showing Up,” starring Michelle Williams as an artist caring for a wounded pigeon.

After the 74th edition of the festival was constrained by the emergence of the Delta variant of the coronavirus, this 12 months’s Cannes is the fest back at its most maximal. The variety of journalists here has nearly tripled since last summer, the parties are once against bustling, and the opening night-film, “Final Cut,” was directed by a big-name Cannes alum — the French director Michel Hazanavicius, whose film “The Artist” debuted here in 2011 before occurring to win the best-picture Oscar.

Hazanavicius has experienced all of the ups and downs that Cannes has to supply: Three years after his victory with “The Artist,” he returned with the war drama “The Search,” which earned such derisive boos and whistles at its press screening that the film barely escaped the Croisette alive. Still, Hazanavicius couldn’t stay away: Though his zombie comedy “Final Cut” was originally presupposed to premiere on the Sundance Film Festival in January, the film pivoted to Cannes when Sundance went all-virtual.

And also you come because when Cannes connects, there’s nothing else prefer it. Perhaps that’s why the opening ceremony for the festival on Tuesday night was capable of land a big-name surprise guest: President Volodymyr Zelensky of Ukraine, who appeared via satellite. In his military fatigues, he spoke to the couture-clad crowd concerning the power of cinema to reshape what we expect of war and the individuals who wage it. Quoting Charlie Chaplin’s “The Great Dictator,” Zelensky said, “The hate of men will pass, and dictators die, and the facility they took from the people will return to the people.”

As he spoke, I believed back to the jury news conference, where the jurors — who include the actress-director Rebecca Hall and the jury president Vincent Lindon, who starred in last 12 months’s Palme d’Or winner, “Titane” — were asked whether film still retains any cultural primacy in a world dominated by the likes of, well, TikTok. One other jury member, “The Worst Person within the World” director Joachim Trier, leaped in to say that moviemaking is “a really radiant, progressive art form that all of us love.” Then he grinned.

“People say that it’s dying,” Trier said. “I don’t imagine it for a second.”