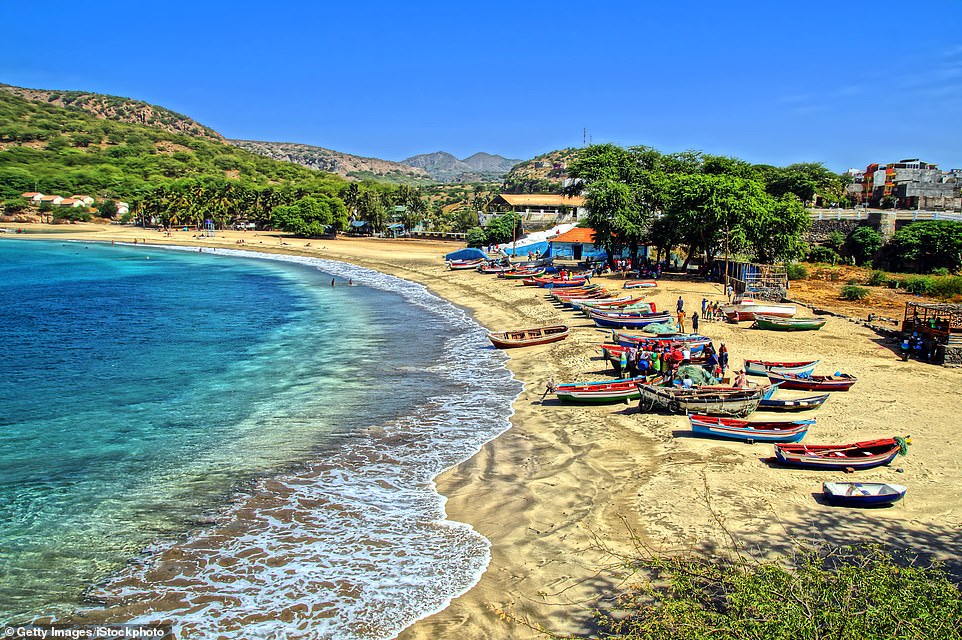 Everyone here is gorgeous. The ladies, eyeing the boys, sashay slimly by of their tight-cut dresses, their thick coils of ringlets piled high.

The lads, 6ft plus, dignified, long-legged, with tremendous foreheads, eye them back. The kids, whimper-out-loud lovely, are eyeing the stray dogs. And even the dogs are healthy and sleek. I had touched down here briefly once before, unscheduled on a transatlantic flight.

One among the opposite passengers apparently had died. But I knew nothing then about this extraordinary archipelago, on the market in the midst of the ocean.

Rugged charm: Kit Hesketh-Harvey goes island-hopping across the isles that make up the archipelago of Cape Verde. Above is gorgeous Tarrafal beach on the island of Santiago – Kit’s first stop 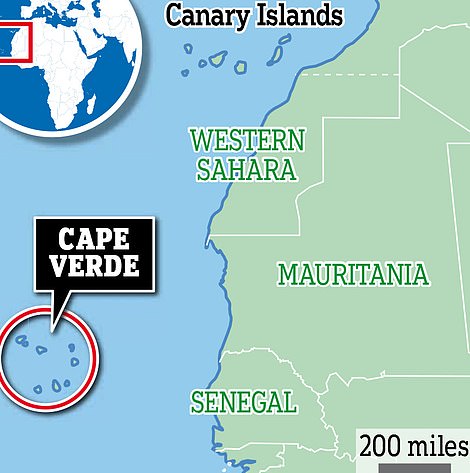 I must have done. You must. It is known as Cape Verde. Nowhere else is especially close. Brazil is a five-and-a-half hour flight, the UK, six.

The closest landfall, Dakar, is 400 miles away. Within the 1460s, Portuguese explorers were zig-zagging down the west coast of Africa. One big zig led them to those ten islands, where, miraculously, they found a freshwater spring. No must zag any further.

Cape Verde would develop into an important stopover for shipping routes, airlines and geopolitics. Incorporated in 1951 as an overseas department of Portugal, its inhabitants continued to campaign for independence. They finally achieved it in 1975.

Greater than likely, coming from the UK, you’ll fly into the islands’ capital, Praia, on Santiago Island. Most of your fellow passengers will probably be package-holiday families, heading for the powder-white sand and azure sea of the island called Boa Vista.

At European longitudes, there is no such thing as a jet lag. ‘And beaches to suit all-comers,’ a chatty NHS nurse on the plane from Birmingham had told me.

‘Kite-surfers, lounger-lizards, turtle-watchers, deep-sea fishermen, honeymooners . . .’ Near to the Tropics, freshened by Atlantic breezes, Cape Verde’s winter sunshine is cheaper than the Caribbean and warmer than the Canaries.

At Arrivals, the tour guides wait, with comfortable taxis and quiet good manners. Mine is Santiago, named after the island. He’s wearing an Arsenal strip and baseball cap.

He takes me to Praia’s swish Ocean Hotel, sited spectacularly on a cliff, where pharmaceutical CEOs, Russian families, a U.S. military VIP and Chinese mining magnates all whisper in huddles and glance towards Africa.

Against this, lunch the subsequent day is at a pavement restaurant, Mar di Baizo, on the north-west of the island.

It’s delicious. Caldeirada de peixe: fish braised in a spiced broth of carrot, yam and green banana. Plenty for each of us, and it cost a tenner. We’d been to see Cidade Velha, that first Portuguese settlement and now a UNESCO World Heritage Site. 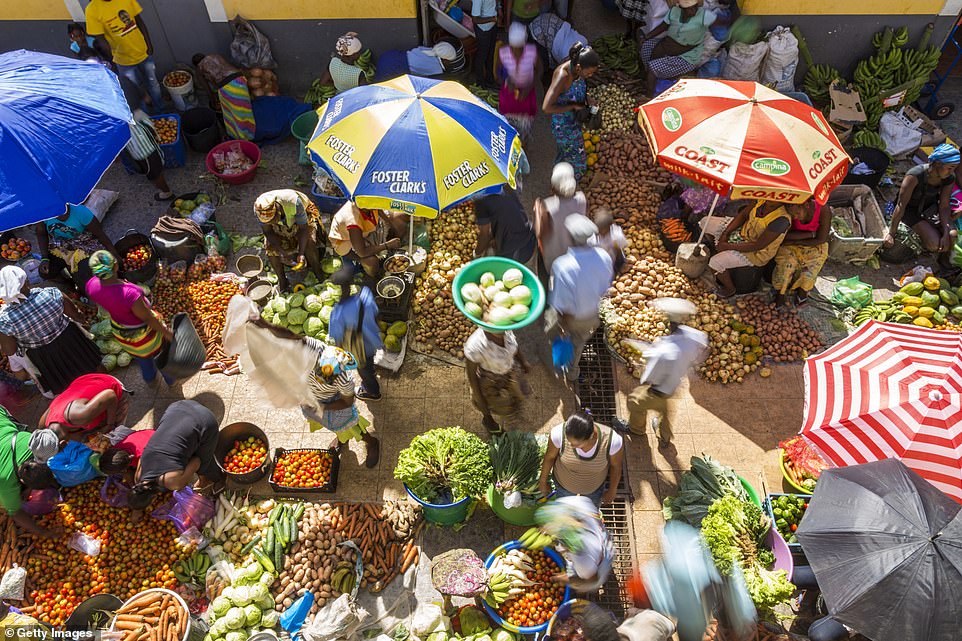 Vibrant: ‘Greater than likely, coming from the UK, you’ll fly into the islands’ capital, Praia, on Santiago Island,’ Kit reveals. Above is a vibrant market on the island 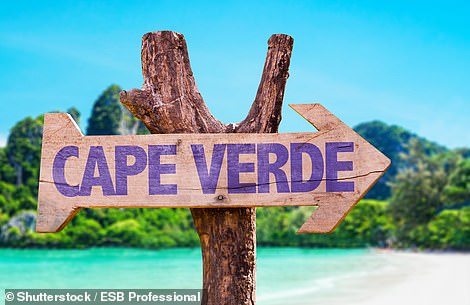 The miraculous freshwater spring still burbles. There’s a sprawling fortress on a mountain top, a cathedral razed by pirates, a few one-storey streets.

Its little vaulted church was built by the Jesuits, who were evidently able to turning a blind eye to the slave market a cobblestone’s throw away. At this Crewe junction of the slaving routes, the hideous trade roared for hundreds of years.

Its physical scars are disappearing, yet the history clouds descendants faces with a touch of melancholy. Many still are forced to work abroad: Santiago’s wife is a nurse in Cardiff. ‘Ex-wife’, he qualifies, with a tragic shake of his head.

Santiago suggests we visit the gorgeous Botanic Gardens, or hike within the mighty mountains. But for me the islands’ more profound fascination lies within the shadows.

After independence, the republic endured a quasi-Cuban Communist tyranny. Tarrafal is a museum: a concentration camp wherein opponents of the regime died in the warmth of their cells. 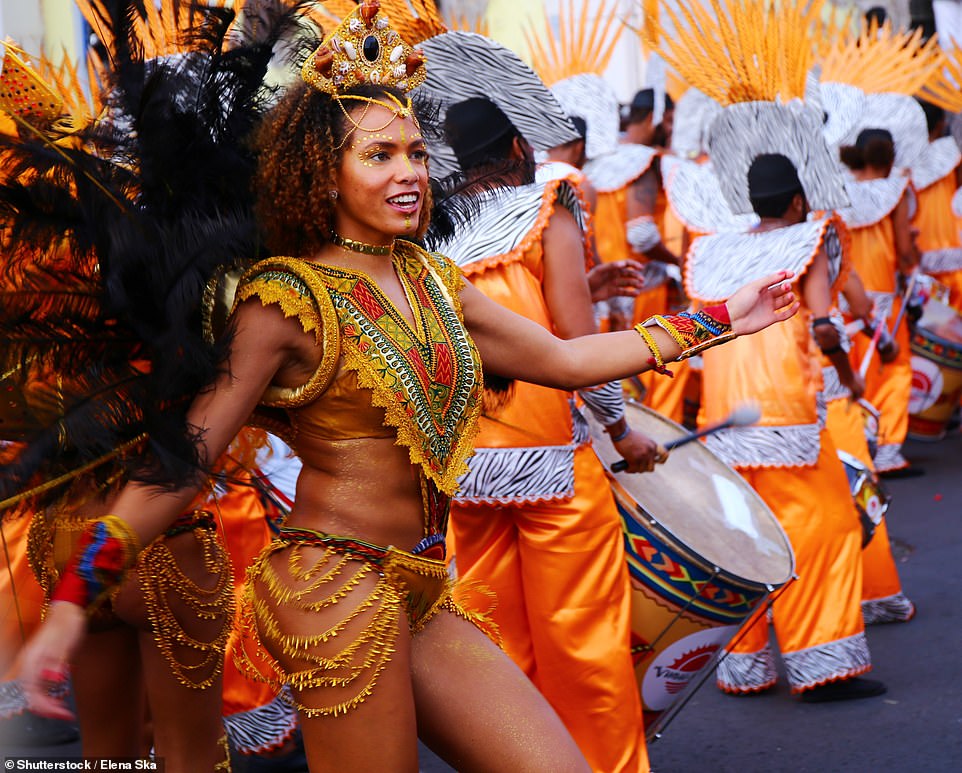 Kit’s guide tells him that the isle of Sao Vicente is where the artists and the musicians go. ‘Their carnival (above) is healthier than Rio,’ he reveals

Santiago repeats that shake of his head, removes his cap and waits for me outside. All I can murmur as I re-emerge is that the value of freedom is everlasting vigilance.

It was Russian Aeroflot flight crews who, at Communism’s collapse, spotted a possible tourist industry.

A long time on, the brand new airports spread across the archipelago are convenient and efficient. The variability of the islands is astonishing. From each, you see the subsequent beckoning.

‘In Brava,’ says Santiago, ‘the water supply just isn’t so good. They’ve black teeth. Sal is the windsurfing island. Maio and Santa Luzia are protected reserves, with rare sea birds on the lagoon, strange reptiles, hump-backed whales. Sao Vicente is where the artists, the musicians go. Their carnival is healthier than Rio.’

Then there’s Fogo, known for its crisp white wine, modestly priced and remarkably good. ‘Over there, see? Fogo. Island of fireside.’

The flight to Fogo takes you over the volcano’s crater. The last eruption, in 2014, engulfed much of the island which hadn’t already been blown to bits. Like black candlewax, jagged layers of spilt lava solidified as they hissed towards a charcoal shoreline. Whole villages were buried, the tops of churches poking through apocalyptic pumice.

But, say Fogoans, ‘what the volcano takes, it gives back’. The soil is of miraculous fertility. The subsistence farmers rebuild their cottages on top of the originals and likelihood the subsequent eruption: due, apparently, in about 2034.

In the intervening time, urchins like chimney-sweeps sift through spoil-heaps to pay for his or her school supplies while mangoes ripen purple and pendulous within the fierce sun.

A series of Nineteenth-century squares processes up from Fogo’s harbour. Listed here are the sobrados, the merchant mansions: slaves and stock downstairs, family upstairs.

One such is my hotel, the Colonial, restored by probably the most remarkable man I even have met here. Vincent Marten is a force of Danish nature.

Near to the Tropics, freshened by Atlantic breezes, Cape Verde’s winter sunshine is cheaper than the Caribbean and warmer than the Canaries

Colossally-muscled, inked as a mercenary, he’s a marlin fisherman straight out of Hemingway, a salvager of wrecks, ice-hockey player for Canada, boatbuilder, authority on Portugese colonial architecture and an interior designer to knock Shoreditch out cold. ‘I purchase a wreck. I placed on Dire Straits and sit alone within the room to work out how one can bring all of it together,’ he says.

There may be an influence cut, however it matters not a jot. Candlelight gleams on massive interior shutters and across a lofty ceiling. Above the antique bed, the headboard has been fashioned by Vincent from industrial corrugated iron. Turkish rugs, Madagascan sea chests, carved easy chairs. I feel like Rimbaud in his final years. Out into Fogo’s starlit streets and I find the Tropical Club, where we eat whelks and percebes (goose barnacles), after which a grouper, poached in madeira sauce. That the bill climbs to £30 I blame upon the local grog: light rum with a heavy punch.

We’re joined informally —because every thing on Fogo is informal — by honeymooners from the subsequent table.

He’s the black sheep of an Angolan political dynasty, who ran away to hitch the Foreign Legion: she, an exquisite Swiss doctor, heiress to a cheese fortune. Visitors to Cape Verde, I conclude, are more interesting than most. 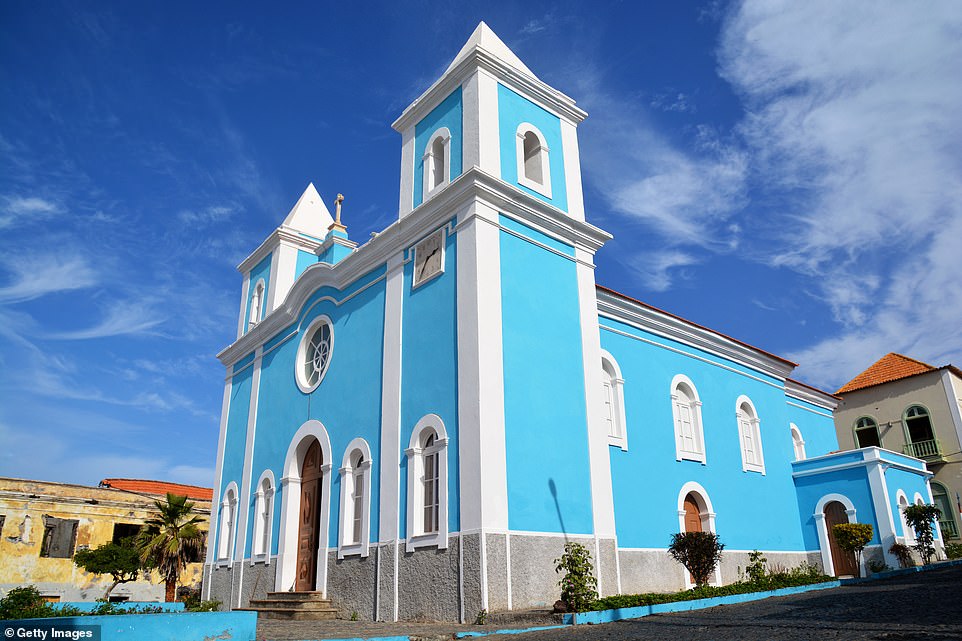 The island of Fogo is understood for its crisp white wine, which is ‘modestly priced and remarkably good’. Above is a vibrant church on the isle

Kit travelled with Cape Verde Experience (capeverde.co.uk) whose island-hopping packages to Sal, Santiago and Fogo, start from £2,099pp for seven nights plus flights.

Morabeza means ‘hospitality’ in Creole: the key language of the slaves, now defiantly reclaimed because the lingua franca.

On the island of Sal, the Hotel Morabeza defines it beautifully. Spacious, cool rooms overlook pools and, beyond them, a secure and golden beach.

Formal dinner, served beneath white lanterns, is harking back to the Cap d’Antibes but without the hefty price tag. Breakfast is plentiful, and includes cachupa, the corn and fish stew which is the national dish.

Along the beach boardwalk to Sal’s windsurfing playgrounds, the locals sing funana: those beguiling, half-way-to-Brazil call-and-responses, accompanied on the accordion.

Preppy North Europeans are measured up for one-offs by the African tailors: beach-robes in vivid, hand-painted Ghanaian textiles, at £30 a pop.

In a rocky global market, what are Cape Verde’s possibilities of sustaining its high popularity for tourism?

A layover British cabin crew at a restaurant tells me that, whereas two years ago they didn’t rate its odds, they now do. One among them imports Winalot for the local dog charity.

At Departures, saluting farewell in his Arsenal cap, Santiago’s sad head-shake turns to a quiet chuckle. He knows I’m sold on Cape Verde.