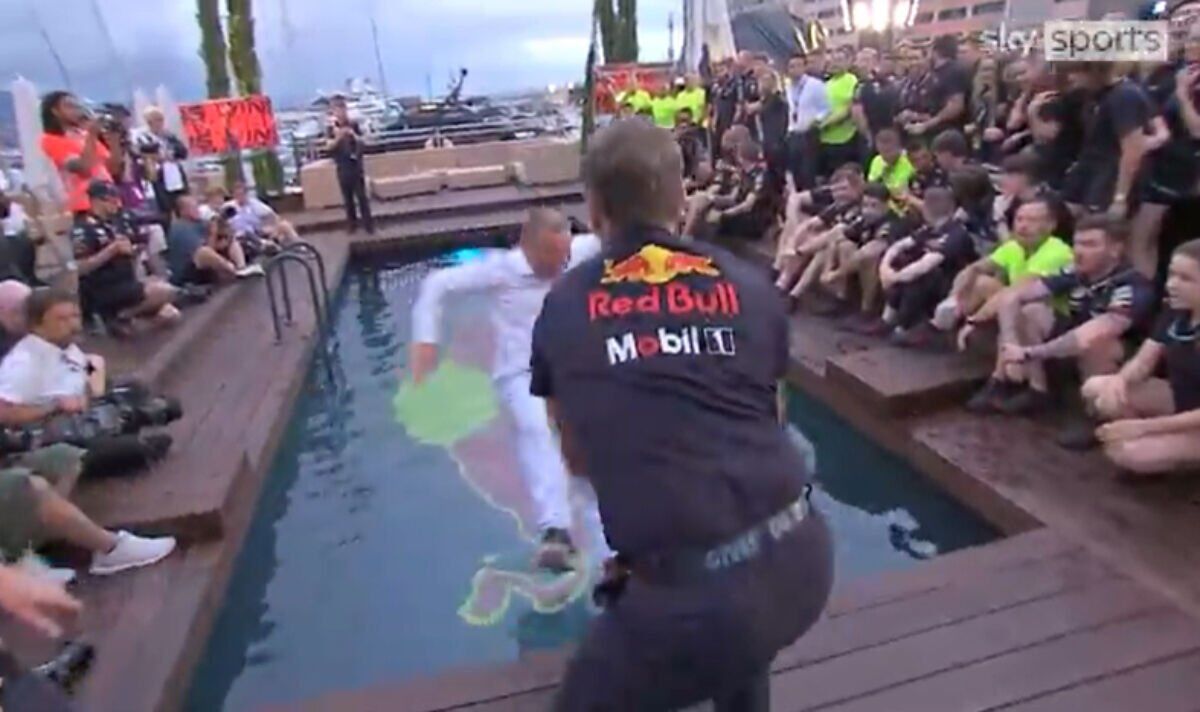 The Mexican claimed just his third F1 victory after benefiting from a technique error from Charles Leclerc and Ferrari in Monte-Carlo. Perez was challenged by Carlos Sainz in a dramatic ending to the shortened race, which failed to achieve the complete distance of 78 laps after a series of lengthy delays, but held his rival at bay to say a priceless win.

The victory saw Perez move to inside 15 points of team-mate Max Verstappen at the highest of the Driver Championship standings and likewise helped Red Bull push on of their battle with Ferrari for the Constructors’ Championship.

Although Verstappen was denied second place, it was a major day for Red Bull as Leclerc dropped vital points and missed out on a podium finish despite starting on pole. Red Bull were in a celebratory mood after the race and were seen posing for pictures around a swimming pool.

Sky Sports’ F1 reporter Craig Slater was interviewing Horner about Sunday’s result when suddenly the Red Bull boss pushed him right into a swimming pool in what gave the impression to be a staged event for the cameras. Slater swam around within the pool for just a few seconds because the Red Bull team laughed before climbing out to grab one other word with Horner.

Asking him about Red Bull’s imperious form, Horner looked as if it would confirm he had planned to push Slater within the pool. He said: “A win in Monaco is all the time very special and to get this race – it’s our sixth Monaco victory – with ‘Checo’, you recognize it was an unbelievable day and hopefully, common sense will prevail on Max and well done for being an excellent sport.”

Slater, soaking wet, then promised: “I’ll get you back in the future.” Horner’s comment on Verstappen was in reference to Ferrari’s protest against the Dutchman following the Monaco GP. Ferrari, who also lodged a protest against Perez, have since seen each of them thrown out after the 2 Red Bull drivers were summoned to the stewards. Ferrari boss Mattia Binotto was incensed after the race and claimed each Red Bulls crossed the yellow line when leaving the pits in an try and stay ahead of Sainz and Leclerc.

He said: “We’re upset because we consider there was a transparent breach of regulations on the 2 Red Bulls happening the yellow line exiting the pit,” Binotto told Sky Sports F1.

“So, being on the road is breaching the race director notes and I believe each single team has an obligation and a task to follow the race director notes. So for us, that’s something unclear and we’re still searching for clarification from the FIA and we can be joyful to have as soon as possible our feedback.”

Leclerc, meanwhile, has demanded talks after a Ferrari pit-stop cost him his place on the front on the grid. He said after ending a disappointing fourth: “There’s been too many mistakes today overall.

“We cannot try this, especially within the moment we’re in now, we’re extremely strong, our pace is robust, we’d like to take those opportunities. We cannot lose so many points like this, it is not even from first to second, it’s from first to fourth because after the primary mistakes we’ve done one other one.”