Climate Activist Sets Himself on Fire on the Laver Cup 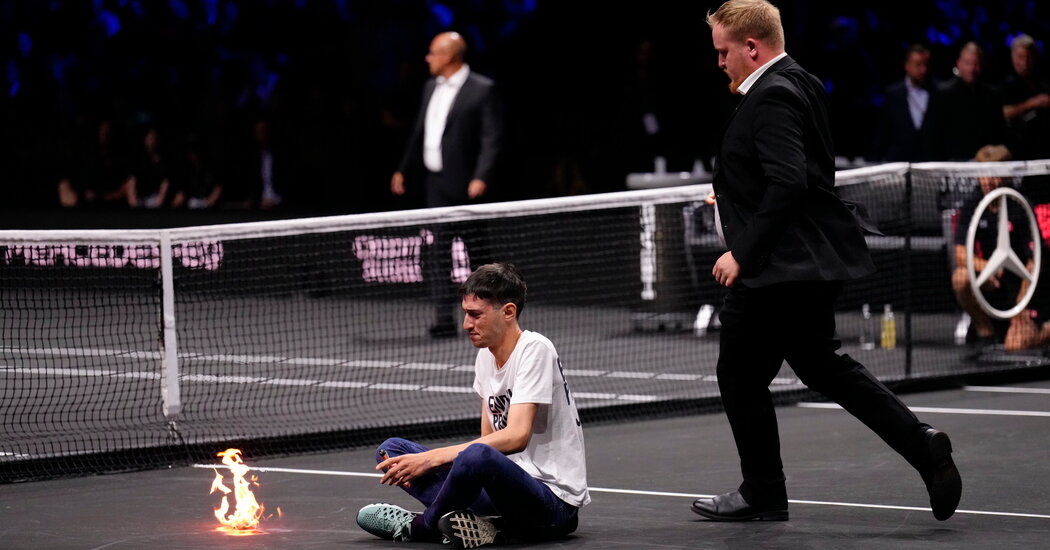 LONDON — A protester set fire to his arm after running onto the court during a match on Friday on the Laver Cup tennis competition, stunning the capability crowd at London’s O2 Arena and briefly setting fire to the playing surface.

Wearing a white T-shirt reading “End UK Private Jets,” the protester, a young man, appeared on the court through the afternoon singles match between Stefanos Tsitsipas and Diego Schwartzman. Sitting down near the online on Schwartzman’s side of the court, the person briefly set fire to his right arm, and to the court, as security officials ran toward him.

The protester appeared to instantly regret the choice to set fire to himself, and quickly put out the flames along with his left hand while a small fire burned on the court next to him. A staff member smothered the on-court fire with a suit jacket while the protester calmly waited to be removed.

Once the hearth was out, and with Schwartzman keeping a protected distance, three security guards carried the person off the court to a chorus of boos from the group.

“He got here out of nowhere,” Tsitsipas said. “I don’t know what this was about. I’ve never had this occur in a match before. I hope he’s all right.”

The person didn’t appear to be seriously injured.

Disrupting high-profile sporting events has grow to be an increasingly common tactic by environmental activists in Europe over the past yr, and a few have succeeded in drawing attention to their causes in a wide range of ways, including attaching themselves to goal posts at Premier League soccer matches; breaching the court on the French Open tennis championships; and blocking the trail of cycling’s Tour de France.

The incident on the Laver Cup appeared to depart the court undamaged, and play resumed after a transient delay. Tsitsipas went on to defeat Schwartzman in straight sets.