Comparisons to Monet Bothered This Artist. Now They’re Side by Side. 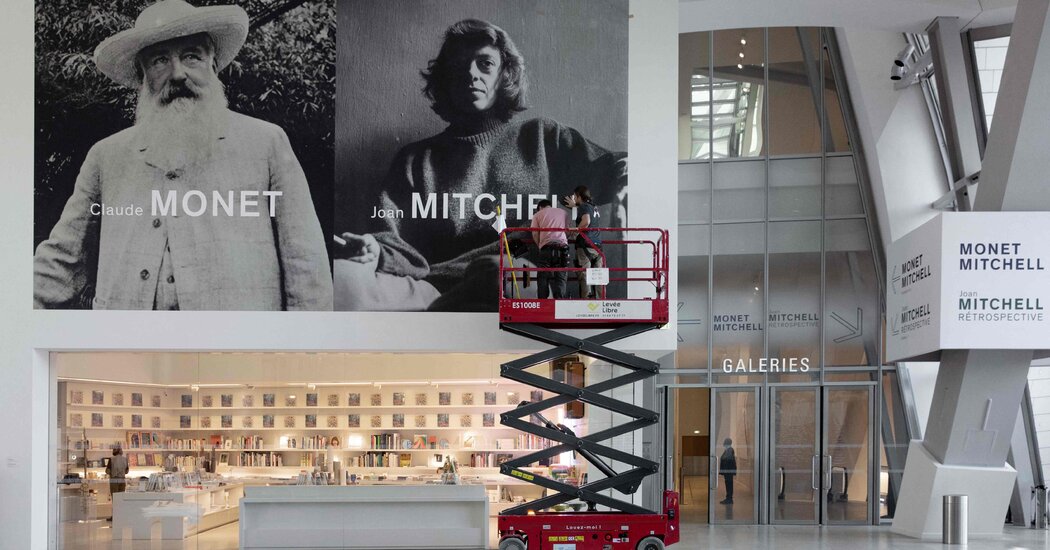 “Don’t discuss with me about Monet!”

That command, from the American artist Joan Mitchell, indicated how much she hated being in comparison with Claude Monet, because the art historian Suzanne Pagé discovered when she visited her in Vétheuil, near Paris, in 1982.

“She was a really strong personality” and “could possibly be very direct,” said Ms. Pagé, who, that very same 12 months, staged a significant solo show of Ms. Mitchell’s work on the Musée d’Art Moderne in Paris. She described the painter’s residence as “a really pretty house” with a terrace and garden, where she hosted and mentored many young artists, with music all the time playing within the background.

“It was as if she was painting the musical notes,” Ms. Pagé said.

Thirty years after her death, Ms. Mitchell is now being officially paired with Monet. Two exhibitions — collectively titled “Monet-Mitchell” — on the Fondation Louis Vuitton in Paris, illustrate the parallels. Ms. Pagé, the inspiration’s artistic director, has curated considered one of these shows, “Claude Monet-Joan Mitchell, Dialogue,” which puts the artists’ works together.

The Fondation Vuitton, which has a dozen works by Ms. Mitchell in its collection, has co-produced the “Dialogue” exhibition with the Musée Marmottan Monet in Paris, which possesses the world’s largest collection of Monet works — including several monumental paintings of water lilies — donated by his son Michel.

Nonetheless much Ms. Mitchell disliked the Monet comparison, it isn’t unreasonable. Her terrace ignored a house that Monet occupied from 1878 to 1881, in addition to a landscape that he painted. Vétheuil is near Giverny, Monet’s final abode, where he produced large-scale works, including the celebrated water lilies series, which were inspirational to Abstract Expressionists, including Ms. Mitchell. And a few of her own late works unmistakably hark back to the paintings that Monet produced in his twilight years at Giverny.

“It’s thrilling for Joan Mitchell to be paired in dialogue with probably the most well-liked artist within the Western world,” said Katy Siegel, who curated the second “Monet-Mitchell” show, “Joan Mitchell, Retrospective,” with Sarah Roberts. The retrospective has opened on the Fondation Vuitton after being presented on the San Francisco Museum of Art and the Baltimore Museum of Art.

Why was Ms. Mitchell so irritated by the parallels drawn to Monet?

“Artists will be very prickly when it’s implied that they’re influenced by someone,” said Ms. Siegel, a professor of art history at Stony Brook University in Recent York. At all times hearing the name Monet, and being related to him by critics, was a source of annoyance, Ms. Siegel explained, because Ms. Mitchell “desired to be her own person.”

The Fondation Vuitton — a contemporary-art space built and funded by LVMH, the French luxury-goods conglomerate — and the Marmottan began discussions a couple of show linking Monet and Ms. Mitchell a number of years ago. The “Dialogue” exhibition is an element of a series of off-site projects that the Marmottan has engaged in to avoid programming too many Monet-themed shows by itself premises within the sixteenth arrondissement of Paris, said Marianne Mathieu, the Marmottan’s curatorial director.

The exhibition consists of some 60 works spread across five levels within the vast constructing, Ms. Mathieu said. She described it as “an experience that has never been undertaken,” through which “monumental works” by each artists have been placed side by side, allowing visitors, in addition to scholars, to “compare” them — “see where they mysteriously converge, and see what sets them apart,” she said. Due to space required, such juxtaposition wasn’t possible before, she added.

Ms. Mitchell has quite a history: She was born in Chicago in 1925. Soon after graduating from the School of the Art Institute of Chicago, she moved to Recent York, where she became a part of a bunch of painters and poets referred to as the Recent York School.

Her talent was quickly recognized: She was considered one of the artists within the influential show referred to as the “Ninth Street” exhibition, viewed as marking the birth of Abstract Expressionism in the USA. Her work was collected within the Fifties by major American institutions, including the Whitney Museum of American Art and the Museum of Modern Art.

In 1959, she moved permanently to France — starting an entire recent chapter in her life and profession — together with her partner, the artist Jean-Paul Riopelle, whom she had met 4 years earlier. Initially, she lived in Paris. In 1968, she moved to the home in Vétheuil and lived there until her death in 1992.

The 2 “Monet-Mitchell” exhibitions on the Fondation Vuitton in Paris coincide with the thirtieth anniversary of her death. They’re milestones in other ways, too: She is being presented with Monet — the artist she so resented being related to — and he or she is finally being recognized as a painter of great importance who was long undervalued due to her gender, each in her lifetime and after her death.

Ms. Siegel said Ms. Mitchell was “considered one of the very biggest artists of her generation,” on par with Willem de Kooning and Jackson Pollock, but added that “being a lady kept her from being assessed accurately and fairly.”

Peers acknowledged her “as being a very good painter,” and “dealers showed her work,” Ms. Siegel added. And yet her work “was never seen as quite as high on the rating list because it must have been.”

Because Ms. Mitchell moved to France in 1959, American institutions and collectors knew her earlier work, while their French counterparts were rather more aware of her paintings from the Sixties and later. “What we wish to do with a retrospective is to place the 2 halves of Mitchell together: to point out her as a completely dimensional person,” Ms. Siegel said.

Ms. Pagé noted that despite Ms. Mitchell’s repeated denials of getting anything to do with Monet, there was evidence that she checked out him closely, and that she felt a kinship with the Impressionist master, who died a 12 months after she was born.

For example, in her early correspondence with Mr. Riopelle, she mentioned that she had gone to see Monet’s “Water Lilies” at MoMA, “pondering of you,” Ms. Pagé identified.

Ms. Mitchell kept a postcard of a Monet painting of his garden at Vétheuil and, as Monet had, described the early-morning views of the sky at Vétheuil as violet. She also visited Giverny when it was an abandoned house and never yet a destination swarming with tourists.

How would she have greeted the Fondation Vuitton’s double tribute?

“She desired to be a part of history,” Ms. Siegel said, adding that she liked to think that Ms. Mitchell would have been “thrilled to see these two exhibitions.”