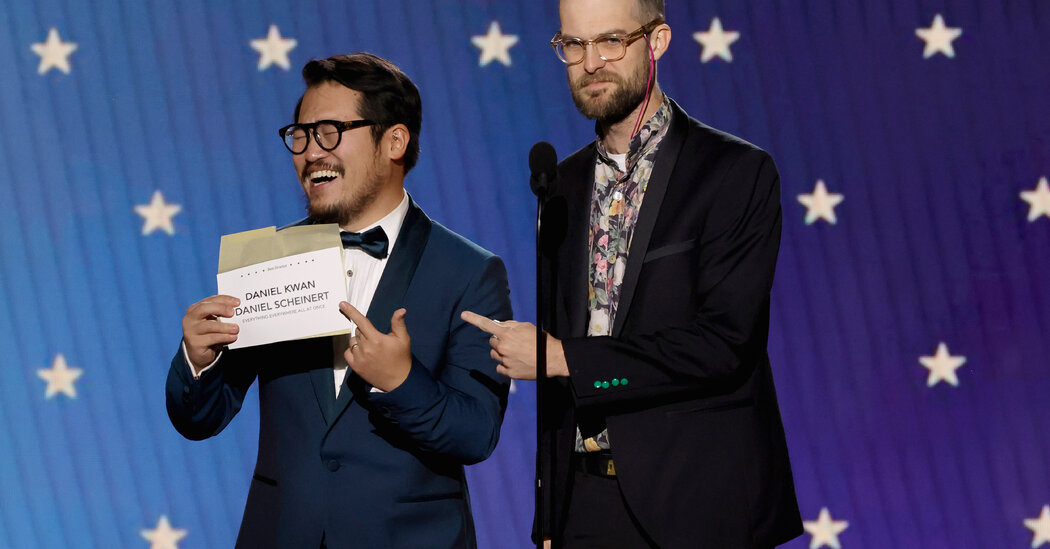 The sci-fi hit “All the things All over the place All at Once,” starring Michelle Yeoh as an immigrant mother who saves the multiverse, took top honors on the Critics Selection Awards on Sunday night, joining “The Fabelmans” (which won the Golden Globe for best drama earlier within the week) and “The Banshees of Inisherin” (the Globe winner for best comedy or musical) because the three movies to have won a significant televised film award this Oscar season.

Those three movies were also the one ones to earn top nominations last week from the producers, directors and acting guilds. The guild ceremonies won’t be held until the top of February, and since they share significant voter overlap with the academy, their winners could go all the best way, as “CODA” did last yr after it took the highest PGA and SAG prizes. But until then, the race for best picture looks awfully competitive, with three very different theatrical features all in play.

“This award is devoted to my dad, a Taiwanese immigrant who worked himself into an early grave,” said Jonathan Wang, a producer of “All the things All over the place,” who held his statuette high and thanked “all of the immigrant parents who would kill themselves for us immigrant children.”

Daniel Scheinert, who directed “All the things All over the place” with Daniel Kwan, appeared gobsmacked upon taking the stage: “That is absurd,” exclaimed the filmmaker, who has said he never expected his film to show into a major awards contender. But “All the things All over the place” notched several other significant wins on the Critics Selection Awards, with trophies handed to the film for its directing, editing and original screenplay. (The film had already tied the record for nominations from the group, with 14.)

And though Yeoh lost within the best-actress category, her “All the things All over the place” co-star Ke Huy Quan won the supporting-actor trophy, as he has all awards season.

“I’m going to try real hard to not cry tonight,” said Quan, who’s in the course of a profession comeback after first achieving fame as a toddler actor in “The Goonies” and “Indiana Jones and the Temple of Doom.”

Brendan Fraser referenced his own comeback while accepting one of the best actor award for “The Whale”: “I used to be within the wilderness, and I probably must have left a trail of bread crumbs,” said the star, who fell on hard times after a leading-man era that included “The Mummy” and “George of the Jungle.” But like his character in “The Whale,” who struggles along with his weight and self-worth, Fraser noted, “Should you can also have the strength to only get to your feet and go to the sunshine, good things can occur.”

Those moving moments gave the Critics Selection prizes some major oomph, though best-actress winner Cate Blanchett used her provocative speech to query your complete awards-show industrial complex, give shout-outs other performers who weren’t nominated, and implore the powers that be, “Stop the televised horse race of all of it!” Seconds later, her speech was interrupted by an orchestra desirous to play her offstage.

“All the things All over the place All at Once”

Daniel Kwan and Daniel Scheinert, “All the things All over the place All at Once”

Ke Huy Quan, “All the things All over the place All at Once”

Daniel Kwan and Daniel Scheinert, “All the things All over the place All at Once”

Paul Rogers, “All the things All over the place All at Once”

“Avatar: The Way of Water”

Best Actor in a Drama Series

Best Actress in a Drama Series

Best Actor in a Comedy Series

Best Actress in a Comedy Series

Best Movie Made for Television

Best Actor in a Limited Series or Movie Made for Television

Best Actress in a Limited Series or Movie Made for Television