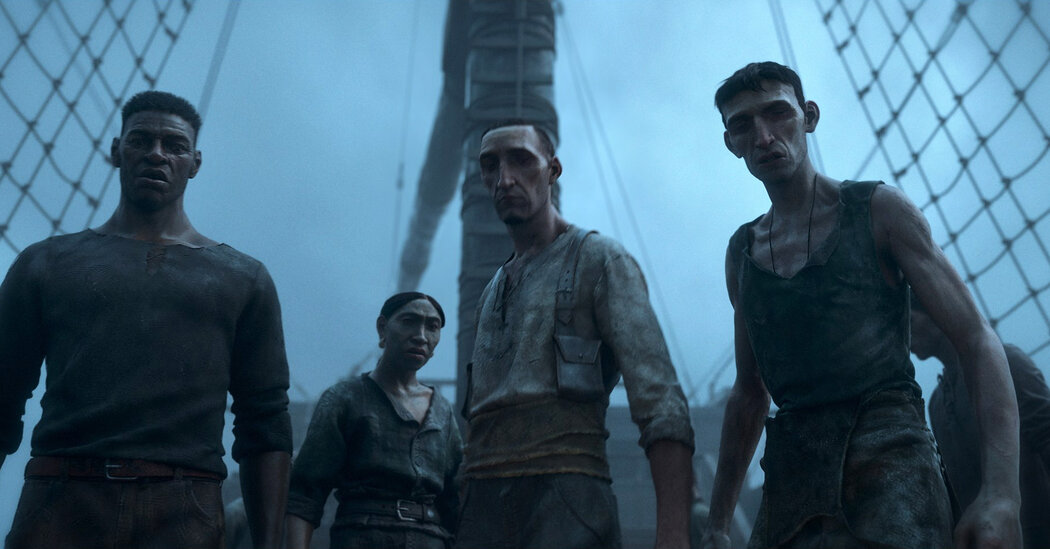 But truthfully, none of that was as difficult for me as being in the midst of Covid and wearing glasses with goggles and a mask and visor. I didn’t quite realize how much I communicate through my face — quite a lot of director-actor relationships aren’t about giving a line reading but through the way in which that you simply interact and the nonverbal cues. The pandemic gear got in the way in which of all that.

How much input did you may have on the visual design? Was there any illustrator or director you were trying to for inspiration?

Tim and Blur had been working on the story for a very long time, they usually had quite a lot of production art that felt “Thief of Baghdad”-adjacent. I felt the world itself needed to be a bit less phantasmagoric and a bit more “Deadliest Catch.” My whole thing was I wanted the people to be susceptible to being washed off the deck at any moment. They’re either going to get chewed apart by these blunt-nosed sharks, or they’re going to be dismembered by these pincers of those giant crustaceans.

It have to be easier to tear characters apart and spill their guts whenever you’re working in animation.

Yes, and on the water! Like Jim Cameron and Kevin Costner will inform you, there are things like forces of nature. If you happen to ever do a story that takes place on the high seas, do it in C.G., since you’re not going to be chasing the sun, and also you won’t be anxious about people being crushed between boats or drowning. And also you’ll never be waiting around for the wave machine.

Is there anyone you’d wish to bring into the fold in the event you get to make a Season 4?

There are rather a lot, but look, this show takes some time. This episode I did took, like, 18 months. We originally began off wanting to do that with Ridley Scott, Jim Cameron, Zack Snyder, Gore Verbinski. So many friends of mine I went to and asked, “Would you wish to do something like this?,” they usually were like, “Yes!” But the fact is that the one way this show is reasonably priced is that if the people who find themselves making it don’t mind losing the cash they may very well be making doing something else.

Are we hoping that the world embraces this show on a heretofore unseen level, making it a no brainer to extend the subsidy for it? Yeah, that will be great. Until that happens, it’s hard to get the director of “Avatar” or the director of “Pirates of the Caribbean” to drop all the pieces they’re doing and are available and play with us.