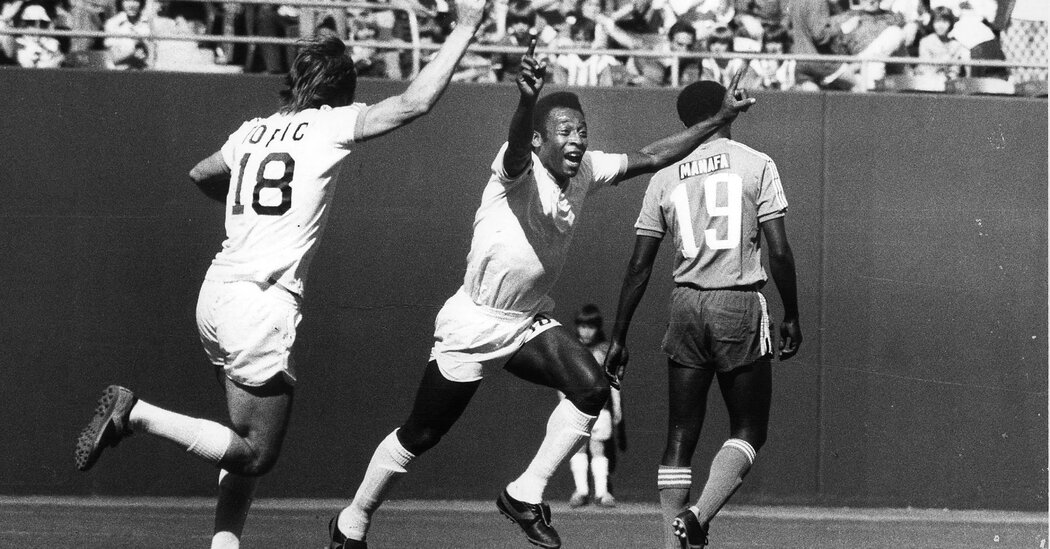 In that pre-internet age, dozens of newspapers, TV and radio stations, magazines, and news agencies sent reporters to see Pelé, and the Cosmos, filling press boxes and changing rooms with a vibrant mixture of Spanish, Portuguese, Italian, German, Greek, Turkish, French and diverse varieties of English.

The locker room scene was latest for Pelé. Before joining the Cosmos, he had answered reporters’ questions either in postgame news conferences or scheduled interviews. The remainder of the soccer world didn’t — and still doesn’t — follow the American custom of admitting reporters into the locker room immediately after games to get players’ reactions.

But selling soccer in America required accommodations, and Pelé — the game’s champion — took all of it in stride. Serene as ever, he would sit in his locker stall, a hefty white towel around his waist, his gnarled and battered-looking feet wedged into shower shoes, answering in genial but broken English.

Pelé at all times struggled with English. He tried, however it didn’t come easily. Quickly he learned to greet people he recognized as “my friend,” sometimes because he had forgotten the name, sometimes just to specific kindness.

When he had harsher feelings to specific, his limited English often helped. To criticize the team’s tactics, lineup or other coaching decisions, he could vent to his longtime friend and interpreter Julio Mazzei, referred to as Professor Mazzei, who spoke fluent English and would relay the criticism. (The Cosmos eventually made Mazzei the team’s head coach.) And on the practice field, Pelé would yell, “Look! Look!” to indicate a poorly placed pass, or, “Work! Work!” when he felt teammates weren’t giving enough effort.