The rooftop bar of Ho Chi Minh City’s Hotel des Arts: the music is surging and the in-crowd is here to see and be seen.

Then, enter two superannuated British tourists. We’re bedraggled, wired after a protracted day’s travelling and clutching our free cocktail vouchers from reception like Neville Chamberlain holding up the Munich Agreement.

The maître d’ clearly thinks we’ve slipped our carers, but is kind and solicitous, offering to part the waves of gorgeous people and find us a table. Conscious of the damage we’d do to the place’s repute, we respectfully decline, opting as an alternative for the lower octane café-bar downstairs.

I mention this because there are common preconceptions about Vietnam, a few of which I shared before going there. One is that after war and nearly half a century of Communist rule, it could be a joyless form of place.

From our ten-day experience, nothing may very well be farther from the reality. Ho Chi Minh is an exuberant metropolis. Elsewhere, particularly within the countryside, there are actually poorer people, but not one of the grinding poverty that’s so immediately apparent in another parts of the world.

On the streets of Ho Chi Minh, the very first thing you notice are the swarms of small motor bikes. This can be a city of eight million mopeds and motorcycles; 15 for each automotive, often driving in wholly unexpected directions.

Crossing the road is an adventure. ‘Head up, and show them no fear,’ says our omniscient guide, in her perfect English.

One other preconceived idea could also be that after the depredations of French imperialism and abomination of the ‘American War’, there would still be bitter feelings towards Westerners. 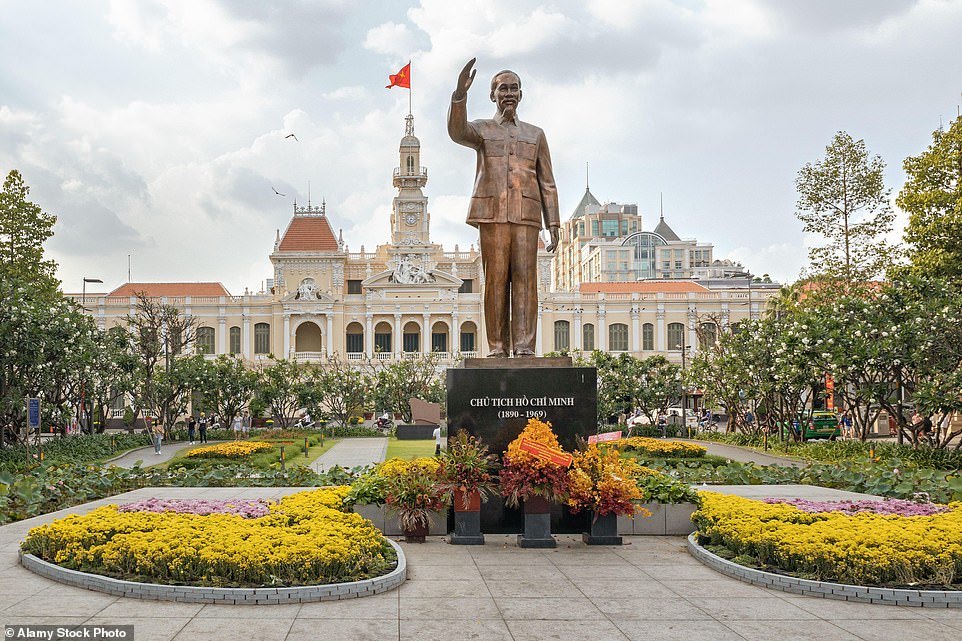 A statue of Ho Chi Minh in Ho Chi Minh City. ‘There are common preconceptions about Vietnam, a few of which I shared before going there. One is that after war and nearly half a century of Communist rule, it could be a joyless form of place,’ says Neil

Again we see none of this. Individuals are friendly, engaging and unfailingly courteous.

The tribulations of the past, for all their grievous injustices, look like accepted as an indelible a part of the country’s story. They don’t forget, but neither do they appear to want their history to carry back their future.

Our first billet, the Hotel des Arts, is an ideal example. Though opened only in 2015, its design is sumptuous and unashamedly French colonial in style — Indochine chic.

The hotel stands on the sting of swanky District 1, a ten-minute walk from the center of old Saigon. There are glistening shopping malls, a sublime old post office, cathedral, market and almost limitless selection of cafes, bars and restaurants.

The food is varied and, outside the swish hotels, remarkably inexpensive. Even at a reasonably classy open-fronted restaurant on the central Dong Hoi boulevard, we had 4 dishes with drinks for around £15. 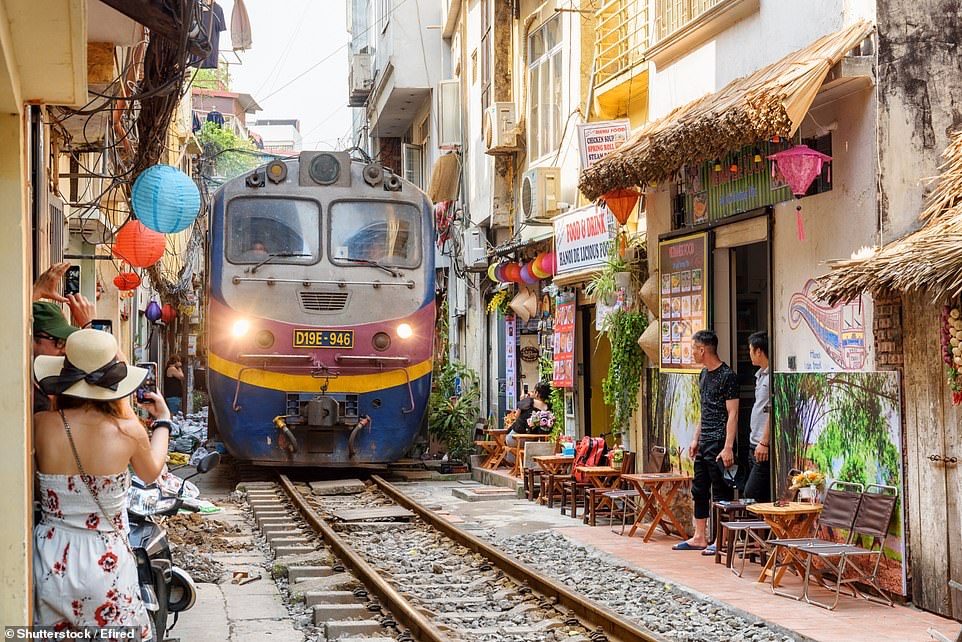 Hanoi’s ‘Train Street’, a preferred tourist spot. Neil fails to make it to the northern city, remarking: ‘Regrettably, to soak up Hanoi and the north as well would have involved an excessive amount of travelling’

And at a street restaurant in Hue city, a couple of days later I enjoyed chicken with fried noodles and a Saigon beer for just over £2.

Ho Chi Minh is on the cusp of a boom. A latest Metro is due for completion late next yr, there are privately run versions of Uber cabs and Boris bikes and spanking latest million-dollar apartments. It might be Communist in theory, but in practice this city embraces the free market with gusto.

Vietnam is on the edge of massive change — and my advice can be to go there before that happens.

Must-do excursions, include a boat-trip on the Mekong delta, some two hours’ drive away. This mighty river system is home to countless tiny villages, with subsistence fishing, artisan workshops and small factories turning coconuts into the whole lot from rope to ink.

A 10m section has been preserved and widened so European tourists can see what it might need been like. Ten metres may not sound much, but at midnight and hemmed in on all sides by mud partitions it’s profoundly claustrophobic. An elderly American before me had a panic attack at the doorway and needed to be helped out. 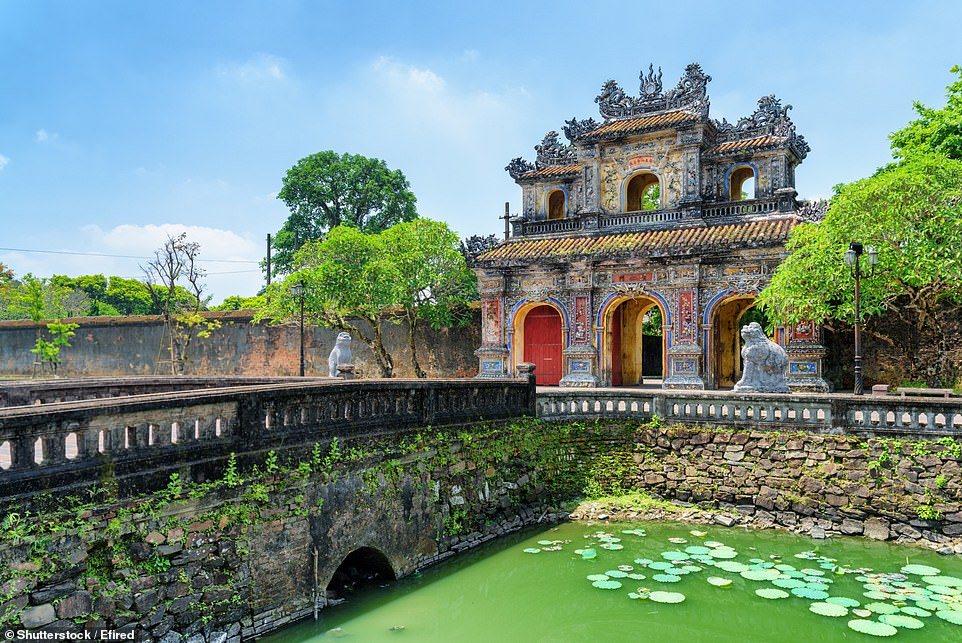 Neil describes his visit to Hue’s great citadel, pictured, as ‘a wonderful experience, with elaborate tombs and temples, quarters for concubines (one emperor had greater than 600: he died young) and quaint ornamental gardens’

My wife, Isabel, and I had at all times intended this to be a mixed holiday, satisfying my obsession with the war, while also taking a look at wider Vietnamese culture and taking loads of day out for leisure. We were fortunate in being sorted by the wonderful Dial-a-Flight and native partners Exo, who worked out an acceptable itinerary with guides and drivers. All the things went with out a hitch.

We settled on three centres, all in south and central Vietnam.

Regrettably, to soak up Hanoi and the north as well would have involved an excessive amount of travelling within the time available.

From Ho Chi Minh we took the short internal flight to the place I had been looking forward to seeing most.

To those of us for whom the Vietnam conflict formed the backdrop to our teenage years, the good citadel at Hue has almost mythic status. It was here, within the country’s pre-colonial capital that the war turned. 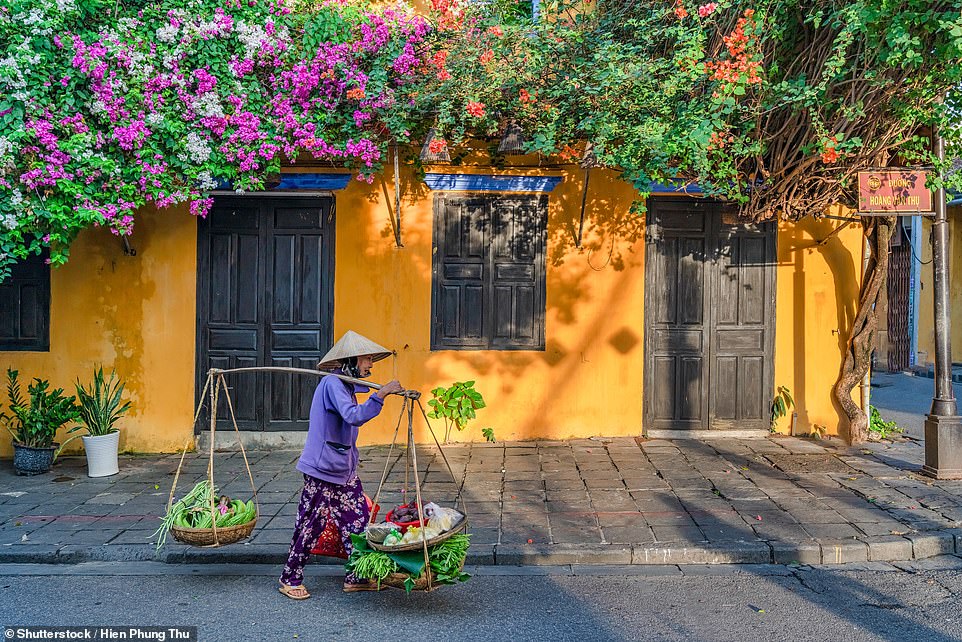 Street life: From Hue, Neil drives over a mountain and thru Da Nang to ‘outlandishly pretty’ Hoi An (pictured)

For 26 days, through the 1968 Tet Offensive, a makeshift force of Viet-Cong guerrillas and North Vietnamese special forces held off the might of the American military.

Among the many shrines of the Nguyen emperors, they fought to the last man, sending out the signal that the North would never give in. Today, the one obvious reminder of those tumultuous times is a preserved section of blackened and pitted wall contained in the citadel’s Forbidden City, where the insurgents made their final stand.

The Forbidden City is a wonderful experience, with elaborate tombs and temples, quarters for concubines (one emperor had greater than 600: he died young) and quaint ornamental gardens.

Shrines to first emperor Gia Long and his son Minh Mang who consolidated the family’s power, are here, exemplifying the unique Vietnamese type of Buddhism, infused with elements of Taoism, Confucianism, animism and ancestor worship. 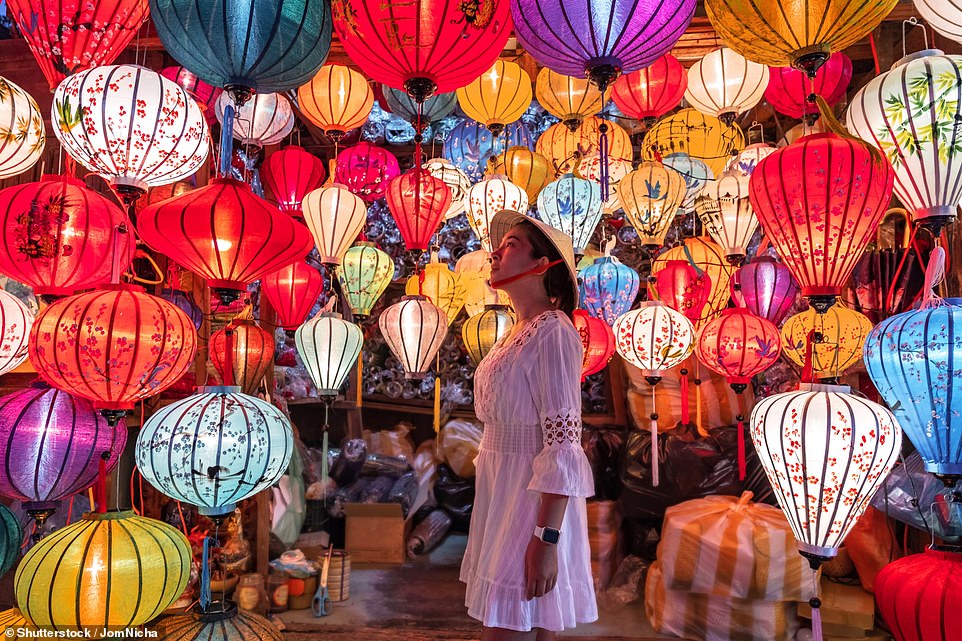 From Hue, you’ll be able to easily reach a few of the best-known flashpoints of the war, including the Demilitarised Zone; Hien Luong bridge, which spans the North/South border; Quang Tri, which saw the longest battle and the Khe Sanh combat base, which had the best casualty rate. They will all be seen in a day — albeit a reasonably long one.

There are vast military cemeteries, too, paying homage to the Commonwealth war graves in France and Flanders. The headstones of the unidentified bear the easy legend ‘A Martyr’. At Gio Linh cemetery, I see a distressed elderly man burning money on a small bonfire. His brother died near here in 1966 and he comes every yr to pay tribute at his grave.

The burning of the cash is a gesture to indicate the worthlessness of earthly riches compared with the true joy of family. It’s an easy, but highly potent gesture.

While my feet are slogging as much as the seventeenth Parallel, Isabel’s are being blissfully massaged within the spa of our hotel, La Residence. Once the house of the French provincial governor, it’s classic Art Deco with a dining terrace overlooking the fabled Perfume River and the citadel.

After Hue, it’s 4 hours by automotive over a mountain and thru Da Nang to Hoi An. On the way in which we pass an ideal lagoon strung with oyster beds, and at a roadside café in Lang Co village we have now the perfect food of the vacation — barbecued rock oysters, served by patron Thang in half-shells with caramelised spring onion and warm roasted peanuts. Hoi An is outlandishly pretty. Multi-coloured lanterns festoon streets of old houses in pastel shades and an exquisite Sixteenth-century bridge separates the previous Japanese and Chinese quarters. 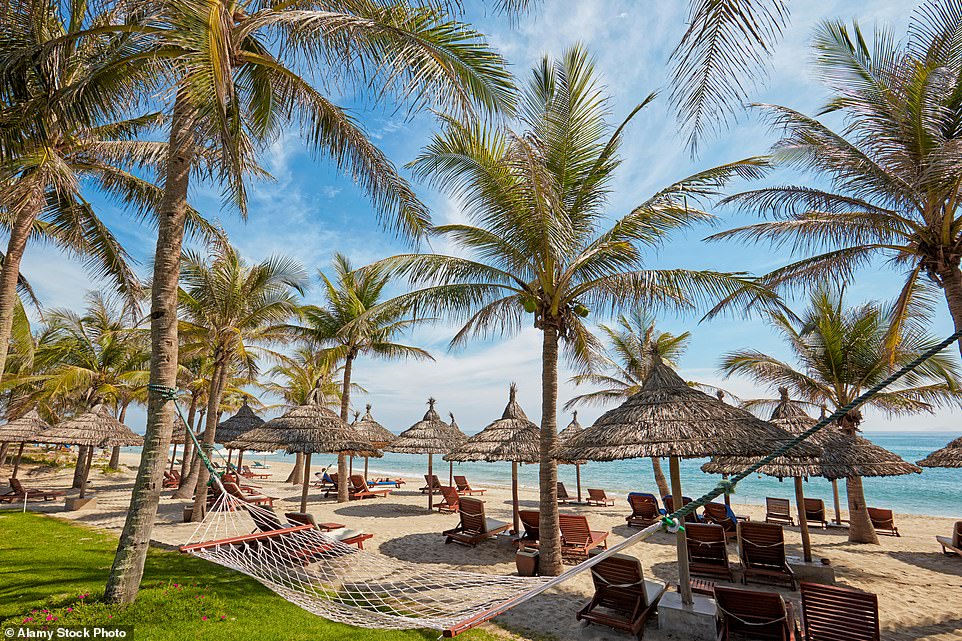 Beach retreat: Neil stays in a ‘salubrious’ ocean-front bungalow at Palm Garden resort, pictured, which lies a mile or two out of Hoi An

DialAFlight offers 11 nights in Vietnam, including flights from London Heathrow with Emirates, from £2,599 pp. This includes 4 nights on the Hotel des Arts Saigon, three nights on the Azerai La Residence Hue and 4 nights on the Palm Garden Hoi An plus all transfers and personal touring, dialaflight.com, 0333 300 1507.

We stay a mile or two out of town on the Palm Garden resort, where we shell out £40 an evening extra for an ocean-front bungalow. It’s value every penny.

Greater (and way more salubrious) than my first London flat and with a bed the dimensions of Wales, it has a terrace just 50 ft from the South China Sea over a manicured lawn.

Down on the local golf club, I’m joined by Ken, an avuncular Australian former plumber, who moved to Hoi An together with his Vietnamese wife after the 2008 financial crash and subsequently made a fortune in property.

Soaring land prices are partly a by-product of Vietnam’s attempts to chop trade reliance on China, whose expansionism it views with deep suspicion. It has entered several latest free trade agreements with other nations lately. Consequently, it has needed to liberalise.

Vietnam is on the edge of massive change — and my advice can be to go there before that happens.

In Ho Chi Minh, I used to be introduced to Bui Duc Luong, a Viet Cong veteran who lived in and fought from the Cu Chi tunnels within the Nineteen Sixties.

Still bearing deep bullet scars on his arm and hip, he sits in his small apartment as his young grandsons scuttle excitedly back and forth.

‘The long run belongs to the young,’ he says. ‘They don’t remember war or hardship, they usually haven’t known hunger. They live for now they usually live in happiness.