‘Doctor Strange within the Multiverse of Madness’ Review: Who’s Mad? 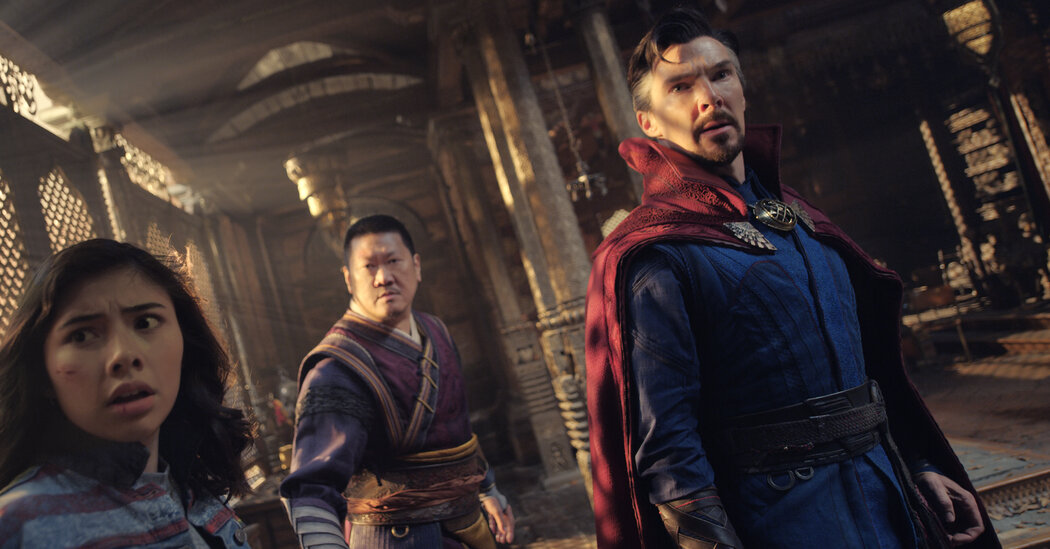 Strange? Madness? Let’s not get carried away.

I’m aware that Strange is the gentleman’s surname — his friends call him Stephen — and that he does indeed have a medical degree. Proper credentials are necessary within the superhero meritocracy. But like lots of his colleagues within the Marvel Cinematic Universe, Dr. Strange (as played by Benedict Cumberbatch) is at most mildly idiosyncratic, with hints of eccentricity in matters of dress and grooming and a whisper of pretentiousness in his attitude. Should you call the enchanted garment that drapes itself over his shoulders a cape, he’ll you’ll want to remind you that it is correctly described as a cloak.

As for madness, the boilerplate on the Disney-Marvel mental property terms of service establishes strict parameters for just how crazy things can get. The surprises that await you in “Doctor Strange within the Multiverse of Madness” — prone to elicit whoops and giggles of fan gratification fairly than gasps of real wonder — have mostly to do with which other Marvel characters show up and in what company. Those closely related to Dr. Strange, like Wong (Benedict Wong) and Karl Mordo (Chiwetel Ejiofor), usually are not unexpected. Not unwelcome either. Neither is a recent sidekick named America Chavez (Xochitl Gomez), an adolescent with impressive powers but no superheroic identity just yet.

The studio has asked reviewers to not say way more, a request that itself gives away the entire point of the movie. “Doctor Strange within the Multiverse of Madness,” like so many entries within the Marvel canon, functions primarily as an commercial for and a footnote to other stories. The title may promise abundance, but this cosmos is as gated and defended as any theme park. The signs posted here direct you always to the Disney+ pseudo-sitcom “WandaVision” — Elizabeth Olsen returns as Wanda Maximoff, also often called the Scarlet Witch — and the last two “Avengers” movies. Not that advance preparation is required. The ingenuity of the M.C.U. is that you may enter at any point and jump around at will.

Which brings us — heavy sigh — to the multiverse, a narrative conceit recently deployed with infinitely more wit and imagination by the directing duo Daniels within the blessedly unfranchised “All the pieces In every single place All at Once.” The “Doctor Strange” rendition is a succession of remarkably similar green-screen projections, with nothing much to differentiate one universe from one other. At one point Strange is asked about his universe, which can also be ours. “It’s beautiful,” he says, and while I wouldn’t argue with that answer, it does someway reveal the smallness of this supercosmic vision.

The favored franchise of superhero movies and tv series continues to expand.

In one among the opposite universes, there’s no such person as Spider-Man. Let that sink in. An alternate Latest York City has tropical flora, canals and a statue of Stephen Strange. Green means stop and red means go. Somewhere, Wanda Maximoff tends sheep in an apple orchard, unless she’s pruning apple trees in a sheep meadow.

Most of it looks quite a bit like Marvel, no less than in the primary half of the movie, which was directed by Sam Raimi from a script by Michael Waldron. There may be a variety of chasing and fighting, with bolts of red, blue or orange light shooting out of characters’ hands. The motion happens in generic spaces that evoke no particular place or planet, and periodically stops for a gentle joke, a rigorously modulated expression of feeling or an evidence of something that may not have needed a lot explaining. There are two magic books, one among which can also be a shrine at the highest of a mountain. The story makes apocalyptic stakes — the fate of the multiverse; the struggle between good and evil — seem curiously trivial.

But as so often happens within the Marvel Cinematic Weltanschauung — often enough to maintain even skeptics from giving up on the enterprise entirely — there may be an inkling of something more interesting, on this case a Sam Raimi movie.

Raimi is one among the pioneers of Twenty first-century movie superheroism. His Spider-Man trilogy from the early 2000s still feels relatively fresh and fun. He can also be a master of horror, the creator back within the Eighties of the peerlessly ghoulish, funny and profound “Evil Dead” series. And the very best parts of “Doctor Strange within the Multiverse of Madness” are the sequences that traffic in zombiism, witchcraft and other dark genre arts.

The creepy-crawly visual effects are significantly better than the fight scenes, and a sequence through which Danny Elfman’s musical rating involves life (with help from J.S. Bach’s Toccata and Fugue in D minor) has the conceptual wit and visual brio of a Pixar short. Olsen, in each incarnations of her Jekyll-and-Hyde character — the doting, melancholy mother and the raging, vengeful sorceress — is frightening not due to her destructive powers or her diabolical ambitions, but because she is so sad.

The intensity of her maternal longing overshadows the romantic disappointment that follows Strange and Christine Palmer (Rachel McAdams). There isn’t much of a love story here. There isn’t much of anything, at the same time as there’s an excessive amount of of the whole lot. That’s how the Marvel Cinematic Universe functions. Possibly it could possibly be different. Possibly interesting directors like Raimi and Chloé Zhao (who followed the marvelous “Nomadland” with the forgettable “Eternals”) could possibly be allowed to do something genuinely strange with their assignments. But possibly that way madness lies.

Doctor Strange within the Multiverse of Madness
Rated PG-13. Nothing too crazy. Running time: 2 hours 6 minutes. In theaters.