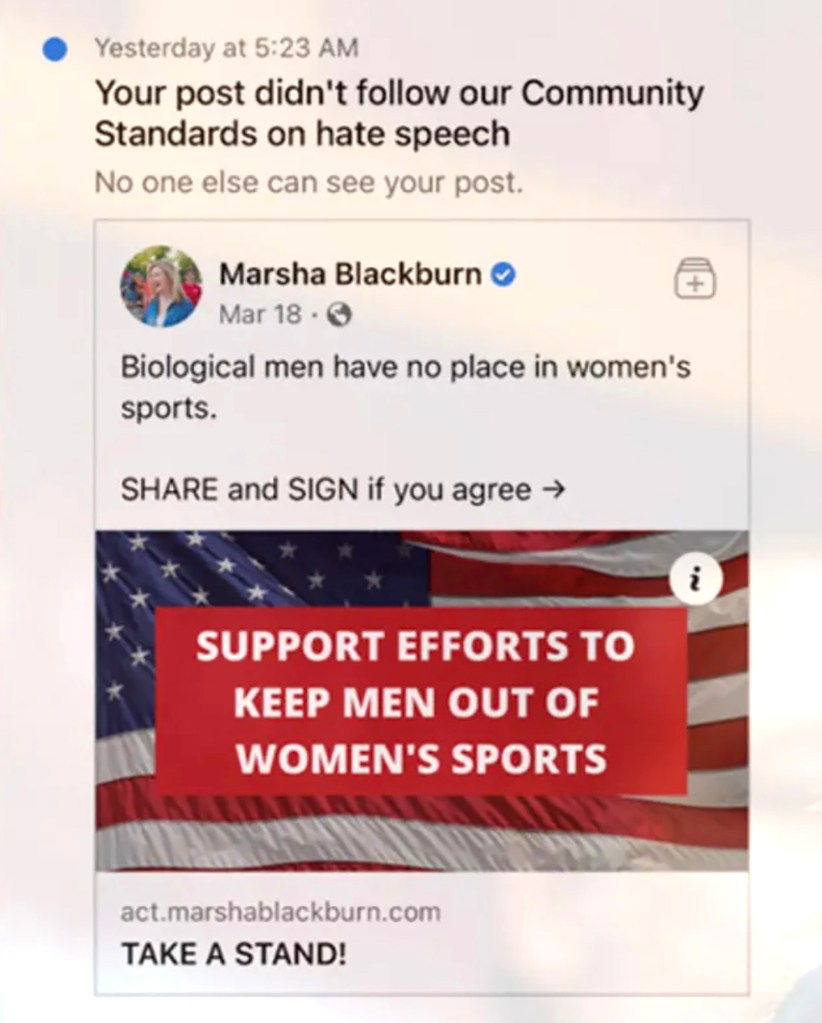 Social media giant Facebook has censored a post shared by Sen. Marsha Blackburn, R-Tenn., after she spoke out against biological males competing in women’s sports.

“Biological men haven’t any place in women’s sports,” Blackburn wrote, linking to a donation page that called on conservatives to “fight back against Big Tech censorship.”

The post, which was shared to Blackburn’s personal Facebook page that has nearly 150,000 followers, was removed, based on Facebook, for violating “community standards on hate speech.”

In an announcement to Fox News Digital regarding the censorship of the post, Blackburn said she refuses to be “silenced or threatened by Silicon Valley oligarchs.”

“Big Tech and the Democrats are colluding to radically transform America,” Blackburn said. “They wish to silence and censor conservatives for speaking out against their woke agenda. It doesn’t take a biologist to know the difference between a person and a lady, and I won’t be silenced or threatened by Silicon Valley oligarchs. Biological men haven’t any place in women sports.”

The post, which was shared to Blackburn’s personal Facebook page that has nearly 150,000 followers, was removed, based on Facebook.@marshablackburn

Blackburn, who garnered attention in March after she asked future Supreme Court Justice Ketanji Brown Jackson to “provide a definition for the word woman,” has been a vocal supporter of protecting female sports in America and has repeatedly spoken out against biological males competing in them.

In an effort to focus on the issues surrounding female sports allowing biological males to compete, Blackburn interviewed Kentucky swimmer Riley Gaines, who tied with transgender swimmer Lia Thomas for fifth place within the 200-yard freestyle NCAA swimming championships in April on the “Unmuted with Marsha” podcast.

Blackburn wrote a letter in July to President Biden slamming his administration’s collaboration with Facebook to rid the platform of COVID-19 vaccine “misinformation” and suggesting the work could violate the First Amendment.

“These revelations are deeply concerning,” the Tennessee Republican wrote within the letter. “The blatant actions by your administration to work with Big Tech corporations to censor Americans’ free speech are shocking — and arguably a violation of the First Amendment.”