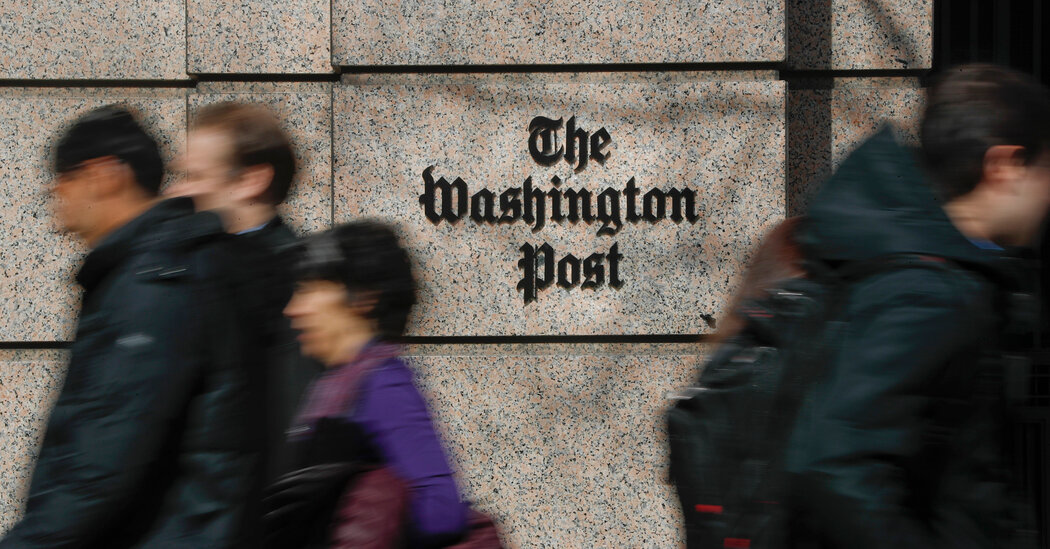 Felicia Sonmez, a reporter for The Washington Post who in recent days has been at the middle of a debate over the organization’s social media policies and the culture of the newsroom, was fired on Thursday, in line with three individuals with knowledge of the matter who spoke on the condition of anonymity to debate personnel matters.

Ms. Sonmez was fired over email on Thursday afternoon, in line with considered one of the people. In an emailed termination letter, which was viewed by The Latest York Times, Ms. Sonmez was told that The Post was ending her employment, effective immediately, “for misconduct that features insubordination, maligning your co-workers online and violating The Post’s standards on workplace collegiality and inclusivity.”

“We cannot let you proceed to work as a journalist representing The Washington Post,” the letter said.

Ms. Sonmez’s internal Slack account was deactivated by Thursday afternoon, in line with a screenshot viewed by The Times. Reached by phone, Ms. Sonmez said that a press release could be coming from The Washington Post Newspaper Guild.

The guild’s statement said it might not comment on individual personnel matters. “We represent and supply support to all members facing discipline,” it said. The news that Ms. Sonmez was now not employed by The Post was reported earlier by The Day by day Beast.

Ms. Sonmez, a national political reporter, sued the paper and a number of other top editors last yr, saying that they had discriminated against her by barring her from covering stories about sexual assault after she had publicly identified herself as a victim of assault. The case was dismissed in March, with the judge noting that The Post had attributed the coverage bans to not her being a victim of sexual assault but to concerns that her public statements had created an appearance of bias. Ms. Sonmez’s lawyer on the time said she planned to appeal.

Previously week, she has been at the middle of a public firestorm over the newsroom’s culture. On Friday, Dave Weigel, a political reporter on the paper, retweeted a sexist joke that implied women were either bisexual or bipolar. Ms. Sonmez then tweeted, “Implausible to work at a news outlet where retweets like this are allowed!”

Mr. Weigel apologized for the tweet. On Monday, he was suspended by The Post for a month without pay, in line with an individual with knowledge of the matter.

Ms. Sonmez then got right into a Twitter disagreement with Jose A. Del Real, a reporter who acknowledged Mr. Weigel’s tweet was “unacceptable” but admonished Ms. Sonmez for “rallying the web to attack” Mr. Weigel. Mr. Real later sent several tweets regarding an “unrelenting series of attacks” against him, and Ms. Sonmez questioned why The Post had not done anything to reprimand him for his tweets about her, including one which said she had engaged in “repeated and targeted public harassment of a colleague.”

In the next days, Ms. Sonmez wrote quite a few posts on Twitter in regards to the newsroom culture at The Post and what she said was the uneven way its social media policy was applied to different reporters. At times she jousted with fellow journalists at The Post on Twitter.

Many within the newsroom supported Ms. Sonmez throughout her lawsuit and were grateful to her for her advocacy for sexual abuse victims, in line with two current Post employees, however the sentiment began to shift this week as she continued to tweet about The Post.

Some felt Ms. Sonmez was hurting the institution and disagreed together with her use of public forums to criticize co-workers, the people said.

Others took issue together with her response to an email from the national editor, Matea Gold, who had urged people to take care of their mental health within the wake of the shootings last month in Buffalo, N.Y., and Uvalde, Texas.

Ms. Sonmez sent a reply-all to the newsroom saying that she had once been punished after telling an editor she needed to take a walk after reading a difficult story.

Ms. Sonmez defended herself in one other set of tweets on Thursday morning, before she was fired, saying, “I care deeply about my colleagues, and I would like this institution to offer support for all employees. Without delay, the Post is a spot where lots of us fear our trauma will probably be used against us, based on the corporate’s past actions.”

The fracas has amounted to something of a leadership test for Sally Buzbee, who became the chief editor of The Post last June. Ms. Buzbee wrote two memos to the newsroom previously week asking for colleagues to not attack one another on social media.

“The newsroom social media policy points specifically to the necessity for collegiality,” Ms. Buzbee wrote in an email on Tuesday.