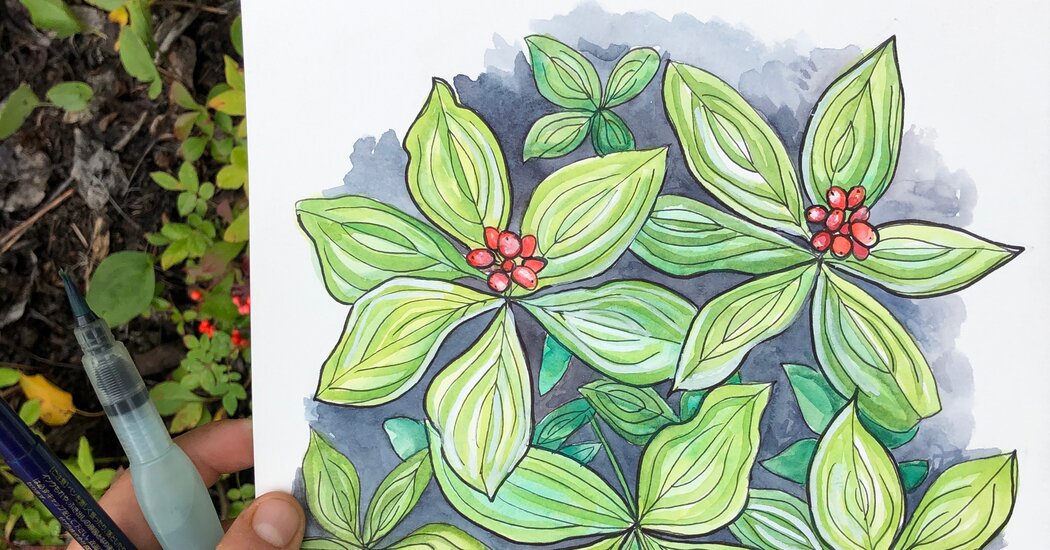 With rain hitting the roof, the temperature outside hovering within the low 50s and a forged iron stove keeping things warm contained in the cabin that, on this July weekend, is serving as an art studio and classroom, I feel a nap coming on. Summer days in Alaska. They usually are not all the time the bluebird skies promised in travel ads.

But there’s no time for napping on this trip to McCarthy, a bustling summer community of artists, writers, seasonal employees and visitors that sits 60 miles down a gravel road in Wrangell-St. Elias National Park & Preserve.

A practice that’s equal parts art and science, field sketching is utilized by researchers and artists to record their observations of nature, from waterways to winged creatures, mosses to mountaintops. Field sketching pairs illustrations with notes about weather, location, animal behavior and even the journal keeper’s mood that day, offering more context than a stand-alone photo. It’s also a robust tool for travel, one which forces you to decelerate, to take things in, to easily look.

I’m excited in regards to the class but there’s only one problem: I can’t draw.

Ms. Link, who lives in McCarthy year-round, discovered field sketching in art school. “It’s such as you’re more present and since you’re sort of quiet, you possibly can hear people’s conversations and interact with place differently,” she said.

The town of McCarthy got its start as a turnaround station for the railroad and have become the bawdy neighbor — with liquor, gambling and prostitution — to the more serious mine and mill town of Kennecott, five miles up the road, near where copper was discovered in 1900.

McCarthy’s population has been slowly growing during the last decade. In 2010 the town had just 28 residents. In 2020 that number rose to 107, now with about 300 in summer, still a far cry from the 1,000 or so individuals who lived between McCarthy and Kennecott within the early 1900s when the mill and mines were running at full tilt.

Now McCarthy is perpetually in a state of being built up and falling apart. Stacks of fresh lumber sit steps away from wood buildings being overtaken by nature, sedges and wildflowers poking out between splintered planks. There’s a latest side staircase being added to the final store, where you possibly can buy scoops of made-in-Alaska ice cream or some duct tape to repair most of the challenges Alaska throws at travelers.

The town can also be an unofficial museum of dead trucks. Some have moss growing on their fenders.

However it’s McCarthy’s dogs, off leash and on their very own agenda, that shape the town’s character. From short-legged mutts to sizable malamutes, all play roles on the town, from unofficial mayor to greeters and village clowns.

The glories of the U.S. national park system draw lots of of tens of millions of tourists every year.

Hercules, a 12-week-old puppy, spent most of his time snoozing on the porch of Ma Johnson’s Hotel, my accommodations for the weekend. The pale yellow two-story constructing is one among many on the town that date back to the mining and mill days. The previous general store, which now houses the Wrangell Mountains Center, can also be a McCarthy original. Though the wood buildings sat quiet for 60 years after the mining company pulled out of Kennecott and folks deserted each towns, several have been restored and repurposed for modern-day visitors, without an excessive amount of updating.

After Wrangell St. Elias National Park & Preserve was established in 1980, the world began to attract tourists. Long before any of this, the land was home to the Ahtna Athabascan people, who still practice traditional subsistence hunting and fishing in the world. The Ahtna Alaska Native corporation currently owns 622,000 acres throughout the park and preserve.

If the pc behind the check-in desk and the guest iPhones charging within the lobby disappeared, Ma Johnson’s would likely resemble the boardinghouse it was 80 years ago. The partitions and floor are layered with art, velvet chairs and thick carpets.

My room is one flight up. There isn’t much room to walk across the bed but I’m already drained after the seven-hour drive from my home in Anchorage. After some wine and dinner across the road on the hotel’s fine-dining restaurant, the Salmon & Bear, the plush bed might be my only concern. On the restaurant, foraged mushrooms, sautéed and served atop a searing-hot stone, surprise me by stealing my attention from the buttery flesh of a dish of black cod. It’s easily my favorite meal in recent memory.

The subsequent morning, the 13 members of the field-sketching class gather on the old general store constructing for breakfast, a meal of warm oatmeal that may help stave off the nippiness within the air.

Some easy chatter starts up. A girl who lives up a close-by mountain details her muddy drive all the way down to McCarthy by four-wheeler. Others, Ms. Link included, talk in regards to the Facebook nature journaling group they joined during lockdown. There’s talk of where we’re each staying. Some at Ma Johnson’s, others camping in tents or, bored with the nonstop rain, of their cars in a close-by campground. One woman is a seasonal guide living in Kennecott. A Seattle woman is staying nearby in a friend’s yurt. After two-and-a-half pandemic years without meeting many latest people, it feels good to expand the circle of creative people in my world.

After breakfast we walk the short distance to the log cabin that might be our classroom and art studio for the following two days. The unique plan was to hike, sketch and paint outdoors. However the rain has forced Ms. Link to rejigger the workshop.

We go across the room introducing ourselves. The group ranges from expert artists to individuals who have barely picked up a paintbrush.

One woman, whose open journal makes clear that she is a talented watercolorist, has detoured by camper van into McCarthy during a move out of Alaska. She’s had enough of hikes that require looking for bears and moose. She wants warm winters. However the workshop offers one last art adventure in Alaska. There are also art dabblers who work as scientists, while others, like me, just need to learn how you can capture what we see around us.

Ms. Link sends us outside to assemble wildflowers, leaves and the rest we will carry back. We return with handfuls of greenery highlighted by purple blooms and big leaves still damp from the rain.

Our first task: blind contours. We ‌pick an item to attract, ‌put pen or pencil to paper and draw for five minutes, focusing only on the outline and shapes of the flora, without taking a look at our work. I’ve tried this before but, here with talented artists, I feel anxious.

When time is up, I look down. The image is recognizable.

We draw and learn for hours that day. I hear less difficult laughter from each table as workshop friendships grow. I find yourself with a wierd leaf watercolor and a landscape that doesn’t quite do the mountains justice. But they’re still higher than anything I could have churned out the day before. The blind contour is my best work.

The subsequent morning offers a break within the rain. We walk out toward the swimming hole, a half mile away, to do some sketching. On the best way there I spot some fireweed growing alongside the dirt road; it’s a native wildflower that blooms from the underside of its stalk-like flower to the highest. Alaskan lore has it that when fireweed flowers bloom all of the method to the highest, leaving what looks like a puff of smoke, summer is at an end.

“Looks just like the fireweed is about to burn out,” I said.

“There’s loads of room left,” said Ms. Link. With winter’s infinite white and grey ahead, she’s not ready to present up the colours of a McCarthy summer quite yet.

Just a few minutes later we arrive on the swimming hole. Alders and bushes peppered with clumps of shiny red baneberries are thick across the shallow pool. A combination of speckled rocks are underfoot throughout the water’s basin.

Ms. Link encourages us to unfolded. I walk about 50 feet up a side trail and back out through a small clearing next to the swimming hole. Poking out of the greenery is a single massive stem of fireweed, its vibrant fuchsia petals barely halfway as much as the highest of the stem — one other local backing up Ms. Link’s determination to carry winter off a bit longer.

I take advantage of Ms. Link’s suggestion of measuring far-off things with my pencil after which translating the length of those lines to paper to work. I draw slowly, looking from subject back to my paper repeatedly. After 10 minutes I give my work an excellent once-over. The scene of mountains behind the water and spruce trees is recognizable. More progress.

Inside 20 minutes, a fat drop of water lands on my sketchbook page. I step back to get more tree cover and snap a number of photos of the rocks underfoot and nearby foliage. I’ll use the photos as reference material to proceed the short sketches back on the cabin.

I turn around to see one among my classmates trying to save lots of her work from the weather. Rain is a cruel companion for a field sketcher working with watercolors.

I slip my sketchbook back into my bag and walk the half mile back to the cabin. Many of the class has already returned.

My sketch from the swimming hole, at just 2 by 4 inches, becomes my anchor. It gives me hope that perhaps, just perhaps I used to be onto something after I signed up for the workshop. Though it’s removed from an ideal murals, I do know that the sketch and the notes with it would all the time put me right back atop those speckled rocks by the water, moments before a fat raindrop hit the page.

In case you do drive, you’ll have to park at Basecamp Kennicott, which also offers camping. Visitors can’t drive into town. The dirt roads that run through McCarthy and Kennecott are for locals only. You possibly can walk the half mile into McCarthy or take a $5 shuttle ride.