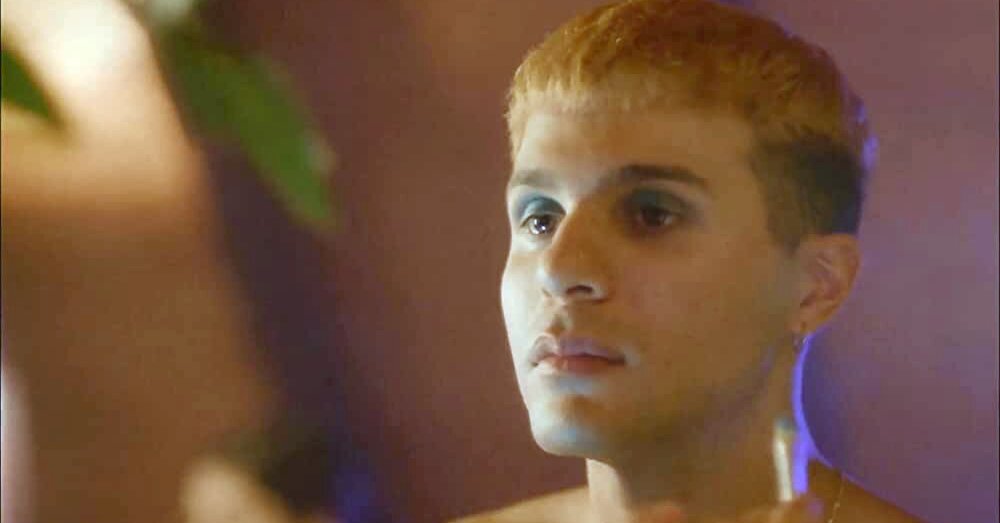 For those who’re trying to watch something off the beaten streaming path this week, take a scroll through “Latest Directions: 20 Years of Young German Cinema,” a free online series hosted by The Goethe-Institut.

Among the many gems within the lineup is “No Hard Feelings,” a sweet and sour queer romance from the Iranian-German filmmaker Faraz Shariat. Parvis (Benjamin Radjaipour), a young gay man and the son of Iranian exiles in Germany, lives a proud and carefree life. We first meet him when he’s vogueing at a nightclub, his bleached blonde hair and white mesh top sparkling within the strobe lights. Later, when a person he meets via a dating app makes a racist comment, an unruffled Parvis puts him in his place — “I’m not into man-child krauts” — and walks out.

But Parvis’s self-assured sense of belonging is unsettled when he’s assigned community service at a refugee penal complex, and he befriends a pair of newly arrived asylum-seekers from Iran, Amon (Eidin Jalali) and his sister Bana (Banafshe Hourmazdi). As Parvis and Amon begin to fall in love, and Bana is faced with deportation, Parvis reckons with all of the ways through which he’s similar yet different from his latest companions, because of nothing but an accident of birth.

Heartbreaking and heartwarming in equal measure, “No Hard Feelings” delivers profound insights with a buoyant pop sensibility. Shariat’s characters may suffer precarity and prejudice, however the director doesn’t deny them queer joy, capturing them in shiny pastel colours, sun-kissed scenes of sensuality and music-video-style montages.

This Malayalam–language mafia epic opens with a bravura long take: The camera winds through the rooms and hallways of a crowded house, dropping us out and in of stray, intrigue-laden conversations, before entering the office of Sulaiman (Fahadh Faasil), a grizzled gangster who’s decided to right his ways and embark on a pilgrimage to Mecca. The shot sets the scene for Mahesh Narayanan’s dense, breathless thriller, which plunges us with little exposition into its gritty milieu. The repentant Sulaiman is arrested when he tries to board his plane, and the police enlist his 17-year-old nephew, Freddy (Sanal Aman), to covertly kill him in prison. Because the young man contemplates this fearsome task, he’s visited by various relatives who recount the bloody story of Sulaiman’s rise from the poor son of a teacher to the righteous protector of a coastal village of impoverished Muslims and Christians.

A mob movie crossed with a Greek tragedy, “Malik” sets an ethical test for viewers. As each latest puzzle piece of Sulaiman’s sprawling back story is revealed, the film forces us to contemplate if his noble ends — uplifting his downtrodden community — justify his vengeful means. But “Malik” also invites us to widen our lens beyond individual actions to indict a complete system. Set against broader historical events in India — including the 2002 religious riots and the 2004 tsunami — the film unfurls as an audacious critique of opportunistic politicians who stoke internecine enmities for selfish ends.

An unsettling gothic tale a few Black maid and her white employer, Jenna Cato Bass’s “Good Madam” exposes the ways through which South Africa’s apartheid past continues to haunt its present. The aging Mavis (Nosipho Mtebe) has spent the majority of her life as a live-in housekeeper for a girl named Diane, while Mavis’s daughter, Tsidi (​​Chumisa Cosa), was raised by her grandmother in poverty. Because the film opens, Tsidi has been driven out of her family home after the death of her grandmother, and he or she arrives at Diane’s abode along with her young daughter in tow.

An air of uncanny pervades the home right from the outset. There’s a dead dog that seems to have come back to life, and the colonial artifacts on the partitions exude malevolence. Then there’s Mavis’s excessively obsequious behavior toward the bedridden Diane, an unseen presence who’s hidden away behind closed doors. Is Mavis’s servitude, which Tsidi finds ridiculous and outdated, the results of some evil spell or simply of many years of racist indoctrination? Reimagining racism itself as a sort of dark magic, “Good Madam” milks loads of chills out of this central mystery, turning the sounds of Mavis’s scrubbing and cleansing into terrifying refrains.

‘The City of Wild Beasts’

Stream it on HBO Max.

A coming-of-age drama about a troublesome kid from a rough neighborhood, “The City of Wild Beasts” is devoid of each the sensationalism and the sentimentalism that sometimes afflict the “slumdog” genre. As an alternative, a rare tenderness courses through Henry E. Rincón’s feature, which centers on Tato (Bryan Córdoba), a delinquent 17-year-old in Medellín, Colombia.

When Tato’s mother dies, he’s left to fend for himself in town’s hard-knock streets. Struggling to scrounge up money while avoiding the wrath of local gangs, our hero leaves town to hunt refuge with a grandfather he’s never met. Curmudgeonly at first, the old man, Octavio (Óscar Atehortúa), a flower farmer within the countryside, eventually takes Tato under his wing, and the 2 form an in depth, taciturn bond. They work the land together and gaze out on the horizon, and at the tip of the day, Octavio gives Tato a wad of money and a precious life lesson: “Work is sacred.”

This moving portrait of intergenerational male affection grounds the film whilst Tato returns to Medellín, and the plot takes some tragic turns. Rincón never loses sight of his protagonist’s hunger for love and sweetness, which persists despite — or perhaps due to — a milieu through which each are hard-won.

Stream it on Mubi.

A layered drama a few South Korean theater troupe rehearsing a play in Greece, Pak Ougie’s debut feature could be described because the evil cousin of “Drive My Automotive.” While Ryusuke Hamaguchi’s Oscar-winning drama turned the theater-making process right into a fertile site for private and philosophical ruminations, “Clytaemnestra” offers a more salacious and cynical behind-the-scenes story, through which directing and acting emerge as tyrannical power plays.

An acclaimed (and unnamed) director gathers five actresses from Seoul in a house in Greece to workshop a production of Aeschylus’s “Agamemnon.” The ladies are friendly, however the director’s bullying methods — which involve unhinged yelling and probing questions on the actresses’ private traumas — incite conflicts, particularly between Hye Bin (Kim Haru) and a sycophantic latest arrival, Kim Ian (Kim Taehee). Each women are vying for the role of Clytaemnestra, the queen who murders her husband, Agamemnon, and his latest conquest, Cassandra.

The lines between performance and reality begin to blur, as one might expect, but “Clytaemnestra” achieves something much sharper than easy allegory. Pak choreographs stark and spare rehearsal sequences against a backdrop wealthy with dramatic history (one scene takes place on the Theater of Dionysus), mockingly undercutting the director’s assumptions of grandeur. While the character berates his actors for failing to understand his source text, Pak shows that the impulses that underlie even classical tragedies are much cruder and more banal than we’d assume.