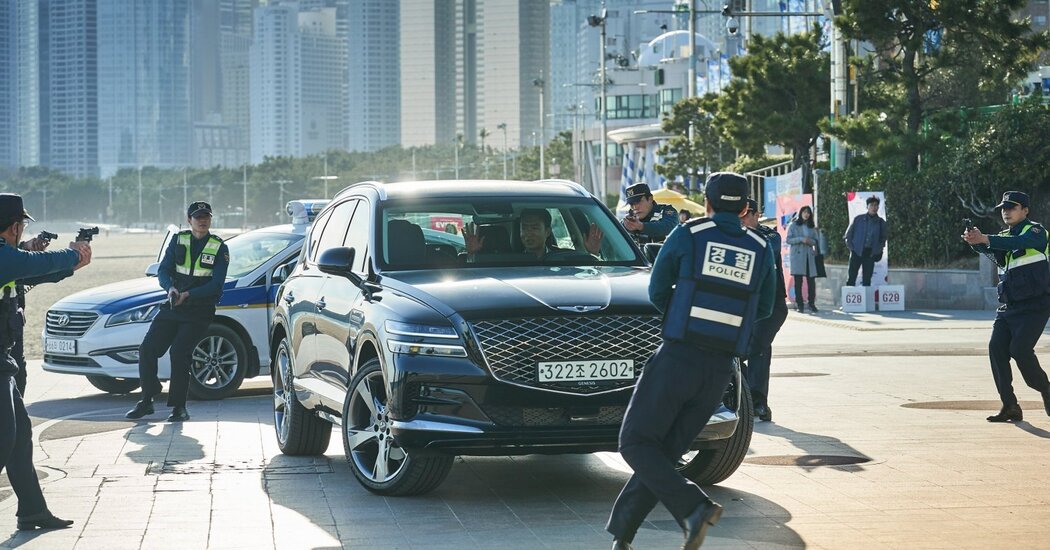 Stream it on Prime Video.

A remake of the Spanish director Dani de la Torre’s “Retribution,” the Korean director Kim Chang-ju’s “Hard Hit” is a furious combination of “Speed” and “Phone Booth” that manages to swerve in unexpected ways. In it, Lee Sung-gyu (Jo Woo-jin), a successful bank manager and father, receives a mysterious phone call while driving his children to highschool. The voice on the road tells Lee that a bomb underneath his seat will explode if anyone leaves his automobile. The one way Lee or his children will live, the caller says, is that if Lee deposits greater than $4 million into the extortionist’s account.

The tight streets of Busan serve because the claustrophobic canvas for giant explosions and vast automobile chases as Lee speeds across town to acquire the ransom and avoid the cops who consider he’s behind the resulting destruction. The fear on Jo’s face grips you within the raucous set pieces. And a late appointment with a ghost from the past makes the chases value every second.

Following a diagnosis of lung cancer, a young Vietnamese comic book artist named Tam (Curong Seven) is given two months to live. Quite than accepting a fate that may leave his wife widowed and his son fatherless, he turns to his Uncle Ma (Hoang Son), an experimental surgeon, to transplant his head onto the body of a dead gangster. The surgery magically imbues Tam with superhero strength just like the characters in his graphic novels. His flights of courage akin to saving a toddler from a burning constructing, nonetheless, soon bring attention from the gang who murdered the previous owner of his body.

“Head Rush,” from the Vietnamese American director Victor Vu, is a melodramatic adrenaline hit that mixes soap opera family dynamics — as Tam’s fame grows, his personal life crumbles — with gravity-defying chase sequences atop roofs that result in balletic fight scenes. Vu’s awareness of how bodies can dynamically move inside space is a key asset on this action-packed subversion of the superhero subgenre, giving “Head Rush” the form of pulpy, B-movie fun missing from today’s cinematic landscape.

Adapted from the manga of the identical name by Fukamachi Akio, “Hell Dogs” combines neo-noir sensibilities with spaghetti western tropes for a suspenseful crime thriller stuffed with double-crosses and more undercover agents than you may count.

On the outset of the Japanese director Masato Harada’s film, we see two gunmen infiltrate a supermarket, murdering three female staff in a black-and-white flashback. One among these employees is the crush of an area cop named Goro Idezutsi (Jun’ichi Okada). The death of his sweetheart sends Goro on a yearslong revenge binge that ultimately forces him to alter his name to Kanetaka to infiltrate a Yakuza mob.

As is inevitable in a gangland drama, Goro soon loses his identity as he slides further toward the dark side of the law, becoming the trusted bodyguard of the Yakuza don Toake (Miyavi). Along with his unhinged partner, Murooka (Kentaro Sakaguchi), Goro carries out bloody hits and reprisals with the workmanlike precision of a person on a mission. Alliances are tested and revealed in a “Today I settled all family business” sequence stuffed with crazed shootouts and distressing assassinations of supposed friends.

‘My Name Is Vendetta’

While the Italian director Cosimo Gomez’s “My Name Is Vendetta” follows within the footsteps of other “messed with the flawed man’s family” movies like “Commando” and “Taken,” it discovers recent terrain by specializing in not only Santo (Alessandro Gassmann), but in addition his daughter Sofia (Ginevra Francesconi).

Santo and Sofia are flung from their idyllic existence when she posts an image of her father to Instagram. Facial recognition software locates Santo, causing a pair of murderous goons to kill Sofia’s mother. Now Sofia and Santo enterprise toward Milan in the hunt for the mafia boss (Remo Girone) who upended their lives.

Gomez puts motion fans squarely within the carnage: There are close-ups of arms breaking, knives plunging into stomachs and blood dripping from victims’ mouths. Between a tautly edited nighttime showdown in a rail yard and a cathartic final confrontation between Santo and the mafia boss, there’s no shortage of high-octane brutality. And yet what makes “My Name Is Vendetta” indelible is the close family relationship that offers the bloody proceedings a tangible element of tenderness.

Stream it on Prime Video.

A comedic spoof of the espionage subgenre akin to “Get Smart,” “Mission: Possible,” by the Korean author and director Kim Hyeong-joo, entertains a hilarious premise: Yoo Da-hee (Lee Sun-bin), a undercover agent on her first mission, teams with Woo Su-han (Kim Young-kwang), a person she thinks is a trained expert in subterfuge, to get better a shipment of stolen guns. There are two problems. Yoo doesn’t realize it, but her bosses consider her task a suicide mission. And Woo appears to be a bumbling idiot hoping to grift some money.

Of their investigation, the 2 meet a band of oddball characters, akin to a flamboyant gay psychic and an older woman in search of her lost dog. Throughout, Kim masterfully breaks the farcical mood with lean gunplay captured by the cinematographer Nam Hyun-woo’s kinetic use of shaky cam. The editor Heo Sun-mi further switches moods by either speeding up or reverting to slow motion. Magically, a satisfying twist turns the climax of “Mission: Possible” into an unforgettable, high-stakes game where love and war hang within the balance.