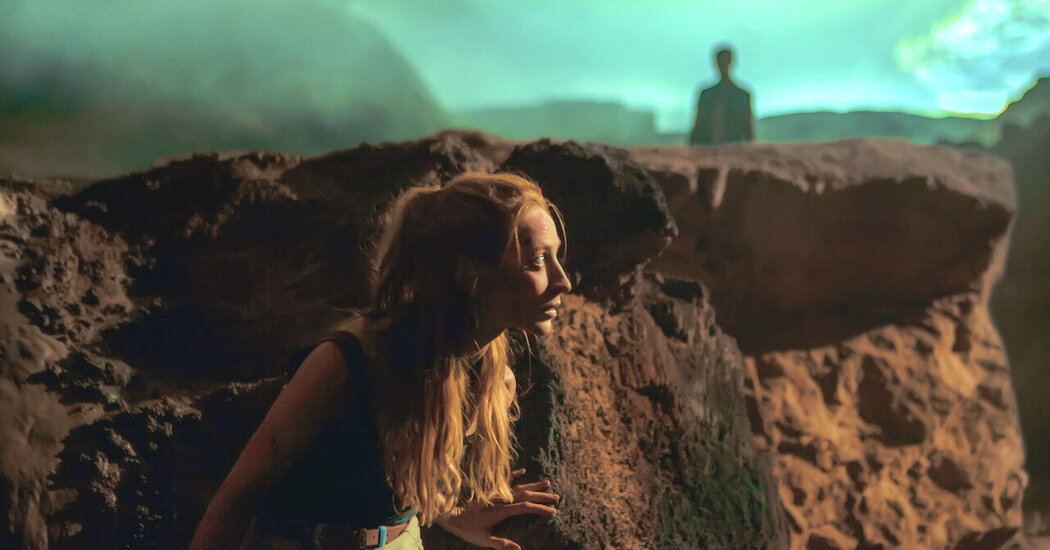 Anyse (Billur Melis Koc), an unfaithful wife, is caught together with her lover by her husband, Sedat (Ahmet Rifat Sungar). After Sedat executes the person, Anyse flees to her family in Turkey, only to find they’ve disowned her. Relegated to hiding within the woods, she must kill Sedat and the boys helping him if she hopes to live.

The straightforward survivalist story within the Turkish director Emre Akay’s “Av: The Hunt” bears a passing resemblance to Ted Kotcheff’s “First Blood” and Coralie Fargeat’s “Revenge.” As in those movies, Anyse uses her resourcefulness to take down her adversaries one-by-one. Koc gives a palpable performance: The exhaustion visible on her face is as essential because the dialogue. The lived-in physicality she brings furthers the film’s unrelenting energy. And yet, it’s the social commentary of a lady slashing and bashing her toxic patriarchal society with machetes and rifles that permits “Av: The Hunt” to be as politically relevant because it is gripping.

Typically, the perfect motion movies have no less than one great chase. The Spanish director Daniel Calparsoro’s pulse-pounding flick “Centaur” is almost one long, continuous pursuit. Based on the French author Jérémie Guez’s novel “Balancé Dans les Cordes,” the plot runs easily: Rafa (Àlex Monner), a promising skilled motorcycle racer is near signing with a significant team. But Natalia (Begoña Vargas), the mother of his daughter, is in serious trouble: The police took from her a big stash of medicine belonging to Carlos (Édgar Vittorino), a ruthless gang leader, and Natalia must pay up.

To avoid wasting her, Rafa makes a deal. Using his motorcycle, Rafa will smuggle Carlos’s narcotics past the cops. But he becomes hooked on the amphetamines the mobsters provide him so he can drive across the clock, threatening all of Rafa’s plans as he loses favor with the racing team. How can he hope to interrupt free?

Because the film answers that query, the cinematography by Josu Inchaustegui, using immersive mounted shots atop motorcycle windshields and long takes, is simply matched in intensity by the acute soundscape of humming motors and slick pavements. Each chase, winding at high speeds down freeways, transforms “Centaur” from a well-recognized narrative of a great man mistakenly crossing the road right into a visceral and technical achievement.

When Jimmy (Matthew Lawrence), traveling to the coast to scatter his deceased brother’s ashes, makes a pit stop at a gas station, he doesn’t know that the girl behind the counter, Natasha (Danielle C. Ryan), is an unflinching killer — until an assassin tries to murder her: In a single motion, she pulls out a shotgun and shoots the hit man dead. Natasha is on the run from her underworld ex-boyfriend, Ellis (Kevin Joy), and decides to flee with the all-too helpful Jimmy.

The director Shane Stanley’s sardonic road trip could solely be a manic-pixie-dream-girl story gone incorrect — Natasha claims she suffers from multiple personality disorder — but the massive fight scenes, counting on W.W.E.-style body slams, give this romantic motion flick some muscle. As does Ask (Dawn Olivieri), the girl accompanying Ellis on his pursuit to capture Natasha. Olivieri brings a whip smart, femme fatale presence to this earnest film. Throughout the final freakout, as Natasha mows through a legion of assassins, it’s Ask’s presence that provides “Double Threat” a daring combination of compassion and attitude.

A movie sequel to the Netflix series “Wu Assassins,” Roel Reiné’s supernatural take, “Fistful of Vengeance,” thrives on big motion beats. Kai (Iko Uwais), an inheritor of ancient magical powers, teams with Lu Xin (Lewis Tan) and Tommy (Lawrence Kao) in Bangkok to look for the murderer of Tommy’s sister Jenny. When the biotech billionaire William Pan (Jason Tobin), a descendant of Pangu, a godlike being now trapped in two talismans, approaches the team with the identity of Jenny’s killer, they think revenge could finally be theirs. But they soon discover William’s real intentions: He goals to overcome the world by reuniting the talismans and obtaining Pangu’s power.

“Fistful of Vengeance” offers the form of large-scale entertainment you hope for from an motion film where the absurd logic is secondary to the rowdy fights. Tight choreography captured in slow motion mixed with magical final moves, whereby Kai shoots lasers from his hands, gives this gleefully silly revenge story some equally beguiling crowd-pleasing appeal.

Robert (Sam Song Li) and William (Roy Huang) are disparate brothers attempting to steer their family business after the death of their father. William desires to put aside their sibling rivalry by planning an audacious birthday prank for Robert: He hires a gaggle of goons led by Chad (Seth McTigue, also the film’s writer-director) to kidnap his brother. William’s plans go awry, nonetheless, when the gang really keep Robert and seek ransom. Now William risks losing every little thing if he hopes to set things right.

With “Take the Night,” McTigue crafts a visually daring game of suspense. The film’s opening shot, an enthralling one take, features the nervous criminals driving toward their goal. The camera stays fixed on them as they leap from the automotive, tackle Robert to the bottom and throw him within the trunk. Supporting these nerve-racking scenes is the theme of fogeys: Not only are the brothers missing their father, however the quiet migrant secretary of their family business, Melissa (Grace Serrano), pines to see her son again in Mexico. How do you fill the void left by a missing loved one? That private layer mixed with the heist format makes McTigue’s thriller a potent and meditative adventure.