For the Most Complex Heroines in Animation, Look to Japan 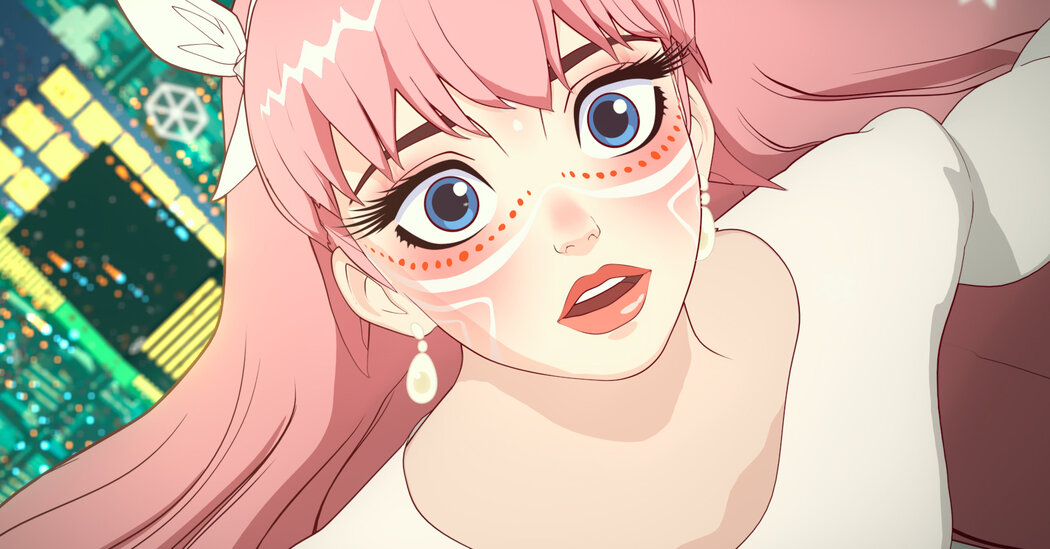 At a time of widespread debate over the depiction of girls in film, the highest Japanese animators have long been creating heroines who’re more layered and complicated than lots of their American counterparts. They’ve faults and weaknesses and tempers in addition to strengths and abilities. They’re not properties or franchises; they’re characters the filmmakers imagine in.

Like many teenagers, Suzu in Mamoru Hosoda’s “Belle” (released here this yr and available on major digital platforms) has a life online that overshadows her every day existence: her alter ego, the title character, is the reigning pop diva of the cyberworld of U. In real life, Suzu is an introverted highschool student in a flyspeck town — even her best friend calls her “a rustic bumpkin.” But she still wins sophisticated listeners, as her music reflects the love and pain she has experienced, especially because the death of her mother, who drowned saving a baby from a flooded river.

Suzu misses her, but she’s also offended at her for sacrificing herself for “a child whose name she didn’t even know.” Suzu went up to now as to desert her impressive musical gifts because her mother encouraged them. American heroines may express a eager for a vanished parent, but not the deep, complicated emotions of this reworking of “Beauty and the Beast.” The protagonist of the Disney version misses her father when she agrees to grow to be Beast’s prisoner, but she never mentions her mother. Nor does Jasmine in “Aladdin.”

In a video call, Hosoda said he believed a significant shift occurred in animation when the Disney artists made Belle a more independent, intelligent and contemporary young woman than her predecessors. She wanted a more exciting life than her “poor, provincial town” could offer — a desire Snow White or Cinderella never expressed. “While you consider animation and feminine leads, you usually go to the fairy tale tropes,” Hosoda said through a translator. “But they really broke that template: It felt very recent. Similarly, what we tried to do in ‘Belle’ is just not construct a personality, but construct an individual: someone who reflects the society through which we live.”

The beast that Suzu encounters in U is just not an enchanted prince, but Kei, an abused adolescent who struggles to guard his younger brother from their brutal father. To save lots of the boys, Suzu discards Belle’s glamorous trappings and divulges herself to be the plain highschool girl she is. When she sings as herself, she touches the boy she desires to help and her grieving heart, too.

Because Japanese animated features are made by smaller crews and on smaller budgets than those of major American movies, directors can present more personal visions. American studios employ story crews; Hosoda, Hayao Miyazaki, Makoto Shinkai and other auteurs storyboard entire movies themselves. Their work isn’t subjected to a gantlet of test audiences, executive approvals or advisory committees.

Shinkai broke box office records in Japan in 2016 with “Your Name” (now on digital platforms). It begins as a body-swapping teen rom-com but develops right into a meditation on the trauma many Japanese still suffer after the 2011 earthquake and tsunami.

Mitsuha is bored together with her life in the agricultural town of Itomori; Taki, a student in Tokyo, desires to be an architect. One morning, they get up in one another’s bodies and should navigate every day life not knowing where to seek out anything or who anyone is.

Because the body-swapping recurs, they find out about one another through their surroundings, establishing a bond that transcends physical distance and time. Mitsuha revels in the subtle attractions of Tokyo. Taki draws the Itomori he sees through Mitsuha’s eyes, but that leads him to a shattering discovery: The town was destroyed three years earlier by a devastating meteor strike.

Eager to warn Mitsuha, he reaches out to her through Shinto-inflected magic. They meet briefly at twilight, when the boundaries between worlds grow to be permeable in Japanese folklore. Like several awkward teenagers, they laugh, quarrel, shed tears and vow to be together again, but in addition they formulate a plan to avoid wasting the people of Itomori.

When Taki vanishes, Mitsuha acts. She’s not a princess on a quest to preserve her realm like Moana, or Poppy in “Trolls 2.” She’s a frightened girl trying to avoid wasting her family and friends from a deadly threat. She defies her pompous politician father, and uses her intelligence and resolve to beat her fear and save a whole lot of lives. But any capable highschool girl could do what Mitsuha does: She doesn’t need superpowers to avoid wasting the day.

“Ultimately, Mitsuha still loses her hometown; she moves to Tokyo,” Shinkai said in an interview via email. “Because the 2011 earthquake, Japanese people have been living with the fear that our cities may disappear. But even when that happens, even when now we have to maneuver elsewhere, we go on living. We meet someone special. That’s what I wanted Mitsuha to do, who I wanted her to be.”

The trend toward complex heroines isn’t recent in anime. Miyazaki’s Oscar-winning “Spirited Away” (released in Japan in 2001 and now on HBO Max) grew out of his dissatisfaction with the superficial entertainments offered to adolescent girls in Japan. “I wanted the fundamental character to be a typical girl in whom a 10-year-old could recognize herself,” he explained through a translator in an interview. “She shouldn’t be someone extraordinary, but an on a regular basis, real person — despite the fact that this sort of character is harder to create. It wouldn’t be a story through which the character grows up, but a story through which she draws on something already inside her that’s brought out by the actual circumstances.”

The protagonist, Chihiro, begins as a petulant adolescent: Her “skinny legs and sulky face” symbolize her overprotected, underdeveloped personality. The trials she faces in Yubaba’s Bathhouse, a spa for nature spirits sullied by human pollution, force Chihiro to develop untapped resources of strength, courage and love. By the tip of the film, the sulky girl has been replaced by a more confident, capable young woman who cares about others. Her transformation shows within the animation: Early on, she runs like a fussy child, eyes half-closed. Later, when she goes to a save a friend, she runs all out, knees and elbows pumping.

In Isao Takahata’s “Only Yesterday” (1991, now on HBO Max), Taeko has an unexciting job and a tiny apartment in 1982 Tokyo. But she’s 27 and single at a time when Japanese women were expected to marry before 25. Bored together with her mundane existence, she decides to go to country cousins she stayed with years earlier.

Taeko is surprised to find her fifth-grade self has accompanied her on the trip. The spectral presence of the girl she once was triggers a flood of memories: School friendships, fights together with her sisters, the onset of puberty. By exploring who she was, Taeko learns who she desires to grow to be in a moving, understated portrait of a girl at a crossroads in her life.

Like Greta Garbo, Chiyoko Fujiwara in Satoshi Kon’s “Millennium Actress” (released here in 2003 and available on the Roku Channel) retired from the screen at the peak of her fame. After 30 years of seclusion, she grants a documentarian, Genya Tachibana, an interview. As Chiyoko reminisces, Tachibana and his jaded cameraman find themselves inside her tangled memories — and flicks. As an adolescent within the Thirties, Chiyoko fell in love with a wounded artist who was fleeing the dreaded thought police.

Kon effortlessly shifts the narrative from reality to memory to film. In Japanese-occupied Manchuria, bandits attack the train on which the teenage actress is traveling. A door within the burning railroad automotive opens right into a fiery castle in a feudal period film: Chiyoko plays a princess determined to affix her lord in death. As a Nineteenth-century geisha, she shields the artist from the Shogun’s troops in Kyoto; as an astronaut, she goes on a mission to seek out him, knowing she won’t have the option to return. The visual complexity of the film mirrors Chiyoko’s personality. Kon depicts her as an independent woman who made her own decisions: what occupation to pursue, when and whom to marry, when to divorce, what roles to play, when to retire.

Although just about all Japanese animation directors are male, more women have been moving into necessary roles lately as producers, writers, musicians and more. Their contributions are affecting the best way women and girls are depicted onscreen.

O-Ei, in Keiichi Hara’s “Miss Hokusai” (released here in 2016, and now on digital platforms), relies on an actual person, the daughter of the nice printmaker Katsushika Hokusai. Although only a number of works might be attributed to her with certainty, O-Ei was an artist in her own right, and plenty of historians imagine she assisted her father when his abilities faltered in old age.

Rapunzel in “Tangled” covered the partitions of her tower room with paintings, but she shows little interest in art once she escapes. In contrast, O-Ei strides assuredly through Nineteenth-century Edo, confident in her talent and her place in its vibrant artistic culture. She focuses on her drawing and may’t be bothered with the normal female duties of housekeeping. “When the place gets too dirty, we move,” she says bluntly.

O-Ei reflects the experiences of girls in modern Japan who’re escaping the sexism of its traditional culture, including the feminine artists who worked on the film. Hara explained via email: “I don’t have any direct experience of O-Ei’s way of thinking: I can only guess. But co-producer Keiko Matsushita, actress Anne Watanabe (who provides O-Ei’s voice) and singer-songwriter Ringo Sheena, who’re very strong-minded, creative women pursuing their goals with great determination, could have related to O-Ei at a more personal level. The film reflects the love and dedication they put into it.”