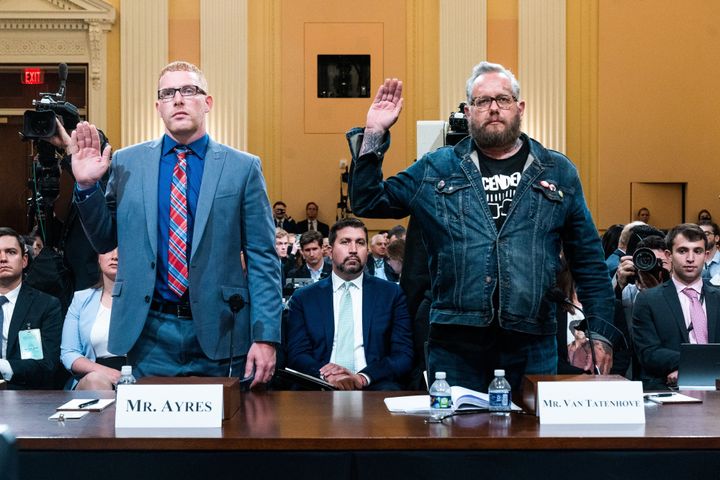 A former spokesperson for the far-right paramilitary organization the Oath Keepers testified before the Jan. 6 House select committee on Tuesday that the group is “dangerous” and “violent” and that its leader, Stewart Rhodes, felt emboldened to guide an “armed revolution” on the U.S. Capitol on Jan. 6, 2021.

“I spent just a few years with the Oath Keepers, and I can let you know that they might not wish to call themselves a ‘militia,’ but they’re,” said Jason Van Tatenhove, a former national spokesperson for the Oath Keepers. “They’re a violent militia.”

Tuesday’s hearing largely focused on former President Donald Trump’s close ties to right-wing extremist groups like the Oath Keepers, which played a serious role within the Jan. 6 assault on the Capitol.

Rep. Jamie Raskin (D-Md.) asked Van Tatenhove specifically about Rhodes’ rhetoric within the weeks leading as much as the Capitol riot.

“Stewart Rhodes implored President Trump to invoke the Rebellion Act, the 1807 law that enables the president to call up militias to place down a insurrection against the USA, and I would like to get your thoughts about this within the context of your prior relationship with Rhodes,” Raskin said. “I understand that you just had conversations with Rhodes concerning the Rebellion Act. Why was he so fixated on that, and what did he think it could enable the Oath Keepers to do?”

Van Tatenhove replied that Rhodes wanted Trump to enact the Rebellion Act because it could’ve given the Oath Keepers “legitimacy” and a “path forward” and would’ve helped Trump stay in power.

He also emphasized that Americans needed to know how extreme the Oath Keepers are.

“I believe we want to quit mincing words and just speak about truths and what it was going to be was an armed revolution,” Van Tatenhove said. “I mean, people died that day. Law enforcement officers died that day. There was a gallows arrange in front of the Capitol. This might have been a spark that began a latest civil war, and nobody would have won there. That may have been good for nobody.”

“All I can do is thank the gods that things didn’t go any worse that day,” he said.

Stephen Ayres (left), who entered the U.S. Capitol illegally on Jan. 6, 2021, and Jason Van Tatenhove, a former spokesperson for the Oath Keepers and shut aide to Oath Keepers founder Stewart Rhodes, are sworn before Tuesday’s hearing of the House select committee investigating the U.S. Capitol riot.

Van Tatenhove’s testimony got here amid a presentation by the House select committee demonstrating the Trump administration’s extensive ties to the Oath Keepers. The group’s members have served as security for Trump adviser Roger Stone, and Rhodes was in an encrypted chat group with Stone and Michael Flynn, Trump’s former national security adviser, in the times before the Capitol attack. (Trump pardoned Flynn and Stone, who were major players in his effort to overturn the outcomes of the 2020 presidential election, before he left office.)

Van Tatenhove said that “the proven fact that the president was communicating, whether directly or not directly messaging” with Rhodes before the rebel, “sort of gave him the nod.”

Rhodes and 10 other Oath Keepers members were arrested and charged with seditious conspiracy for allegedly plotting violence on Jan. 6 to stop Congress from certifying President Joe Biden’s Electoral College victory.

Federal investigators say Rhodes tried to speak with Trump via an intermediary as rioters were storming the Capitol on Jan. 6. (The name of the intermediary is unknown.)

Van Tatenhove appeared before the committee wearing a jean jacket pulled over a black T-shirt for the band The Descendants. He explained that he first got here into contact with the Oath Keepers in 2014 as an “independent journalist,” when he went to report on a series of armed standoffs between far-right militia groups and the federal government across the Western U.S.

After developing a relationship with the Oath Keepers, he was offered a job running the group’s website and acting as its spokesperson, which he accepted.

“You could remember back to the conflict within the Middle East where our own military created a deck of cards, which was a who’s-who of the important thing players on the opposite side that they desired to take out,” he testified, referring to the U.S. military’s list of alleged terrorists to kill in Iraq and Afghanistan. “And Stewart [Rhodes] was very intrigued by that notion, and influenced by it, and he wanted me to create a deck of cards that might include different politicians, judges, including Hillary Clinton because the Queen of Hearts.” 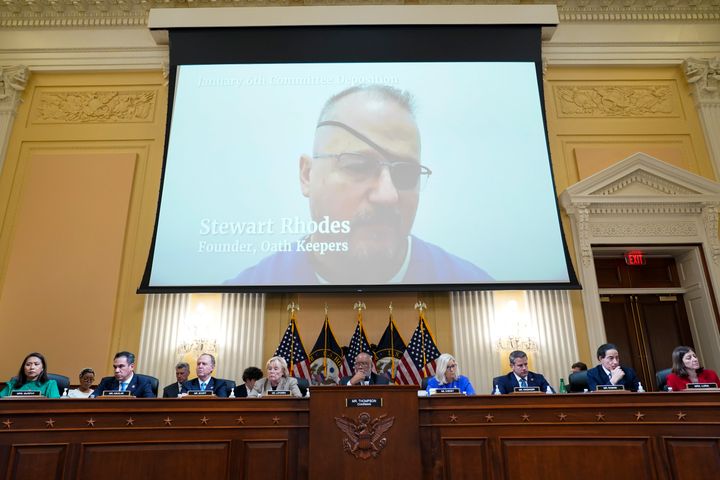 A video of Stewart Rhodes, head of the Oath Keepers, speaking during an interview with the Jan. 6 committee is shown on the hearing Tuesday.

Van Tatenhove said he declined to do the project. He said he grew further disillusioned with the group as he saw it openly embrace white nationalism and “straight-up racists.” The breaking point got here in a Montana food market, he recalled, when he heard Oath Keepers denying that the Holocaust happened. He says he left the group a short while later.

When asked to explain the Oath Keepers’ vision for America, Van Tatenhove replied that it doesn’t include the “rule of law… it includes violence.”

“It includes attempting to get their way through lies, through deceit, through intimidation and thru the perpetration of violence,” he said.

At one point in the course of the hearing, Raskin noted that the Department of Justice has evidence that the Oath Keepers brought firearms, tactical gear and explosives to Washington, D.C., ahead of the Jan. 6 attack.

Van Tatenhove responded that “there was at all times the push for military training, including there have been courses in that community that went over explosives training” within the Oath Keepers.

“I believe we’ve gotten exceedingly lucky that more bloodshed didn’t occur since the potential has been there from the beginning,” he told the committee.

Van Tatenhove ended his testimony by saying he’s scared for the longer term of America.

“I do fear for this next election cycle because who knows what that may bring if a president that’s willing… to whip up his followers using lies and deceit and snake oil, whatever the human impact — what else is he going to do if he gets elected again?” he said. “All bets are off at that time, and that’s a scary notion.”

“I even have three daughters,” he added. “I even have a granddaughter, and I fear for the world that they are going to inherit if we don’t start holding these people to account.”