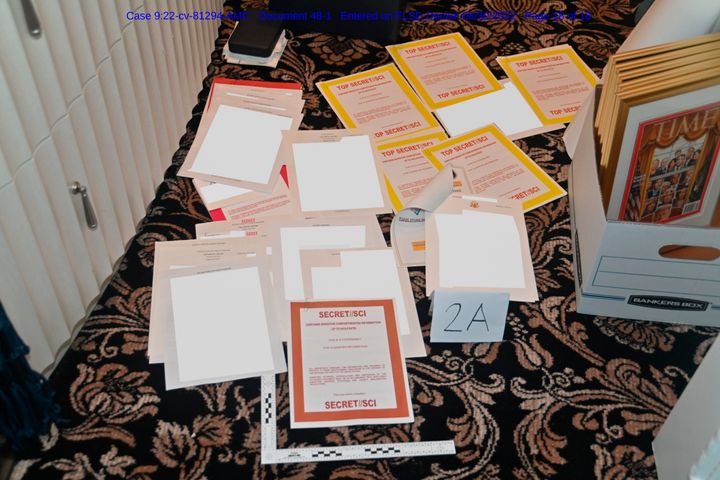 “Fox & Friends” host Steve Doocy went against the show’s usual approach of softening as much as Donald Trump, questioning on Wednesday the previous president’s motives behind keeping classified government documents at his private residence in Mar-a-Lago long after his presidency.

The show and its three hosts were interviewing South Dakota Gov. Kristi Noem, a Trump ally, when Doocy brought up the FBI raid earlier this month on the previous president’s home in Florida, which resulted within the confiscation of boxes of materials that included 11 packets of classified documents ― a few of which were labeled with the very best classification markings.

“Ultimately, it comes right down to why did he have all that secret stuff at Mar-a-Lago?” Doocy asked. “I do know his team has said they declassified it, but that’s news to the agencies that those documents belong to.”

Steve Doocy to Kristi Noem: “Ultimately, it comes right down to why did he have all that secret stuff at Mar-a-Lago? I do know his team has said they declassified it, but that is news to the agencies that those documents belong to.” pic.twitter.com/WVm1LvbiPs

Investigators are taking a look at whether Trump violated several federal laws related to official and classified records, based on a redacted FBI affidavit released last week. Prosecutors with the Justice Department filed a 36-page temporary late Tuesday detailing the sensitive documents found at Mar-a-Lago, in addition to efforts by the previous president and his team to obstruct their criminal investigation.

Prosecutors included a picture of a number of the documents discovered when the FBI executed a search warrant at Trump’s residence. The photo shows five yellow folders on the ground marked top secret, in addition to one other that claims “Secret SCI,” which suggests sensitive compartmentalized information. The remaining documents within the photo were edited to censor sensitive information.

“Those are the most important secrets on the planet. And apparently the previous president went through ’em in January,” Doocy said. “Why wouldn’t he say, ‘Oh, you already know what? I actually need to show that back over.’ Why did he have all that stuff at Mar-a-Lago?”

Prosecutors with the Justice Department filed a 36-page temporary on Tuesday detailing the sensitive documents that the FBI found when searching former President Donald Trump’s Mar-a-Lago residence in Florida. Prosecutors included a picture showing several top secret folders that were found on the private residence on Aug. 8.

Noem responded by repeating Trump and his allies’ talking points that somebody outside the Justice Department should investigate the incident within the name of “transparency.” The previous president has requested a judge appoint a “special master” to review the confiscated documents to come to a decision whether or not they shouldn’t be released as a consequence of “executive privilege” ― something prosecutors argue Trump doesn’t have as a consequence of being a non-public citizen and it being the chief branch searching for the documents from him in the primary place.

“What is that this information? We don’t know what was in there,” Noem said of the classified documents that, as their label insinuates, contain sensitive government information intentionally kept classified for national security reasons. The governor also suggested without evidence that the FBI was either lying or had planted the documents at Trump’s residence.

“Let’s discover really what the method is, what is correct, what’s precedent that other presidents have followed, and be sure this is finished appropriately.”

“Governor,” Doocy responded, “I don’t think any president has ever carted off that many documents to their house after they left the presidency.”