Fox’s record NFL rankings prove no one watches for broadcasters

How much is that doggie within the window?

When you ever needed more evidence that sports TV executives — those that ostensibly know what’s best for viewers — operate on a wish consider this:

The Giants-Cowboys game Thanksgiving Day on Fox established the record because the most-watched regular-season game since 1988, when such numbers were first recorded.

If we’re to guage such a record by the hirings and spending habits of network shot-callers, that record number reflects a repudiation of Fox’s longtime team of Joe Buck and Troy Aikman, this season lured to ESPN for a staggering total of an estimated $170 million over five years.

In turn, those numbers would also reflect a national endorsement of Fox’s bargain-basement rookie No. 1 team of Kevin Burkhardt and Greg Olsen. Next season, Olsen is anticipated to get replaced by Tom Brady for a reported $375 million over 10 years.

Evidently once CBS signed Tony Romo for nearly $180 million over 10 years, the race to treat network checkbooks as scratch paper has turn into a scene from “It’s A Mad, Mad, Mad, Mad World.” Also, NBC prolonged Cris Collinsworth with a $12.5 million annual salary, up from a reported $4 million per.

In fact, on this Thanksgiving Day — on any NFL-on-TV day — no such viewer announcing team or individual preference activism was at work. Giants-Cowboys drew a giant audience since it was Giants-Cowboys on Thanksgiving afternoon, with America largely indoors and sure, if a part of a vacation gathering, barely listening. 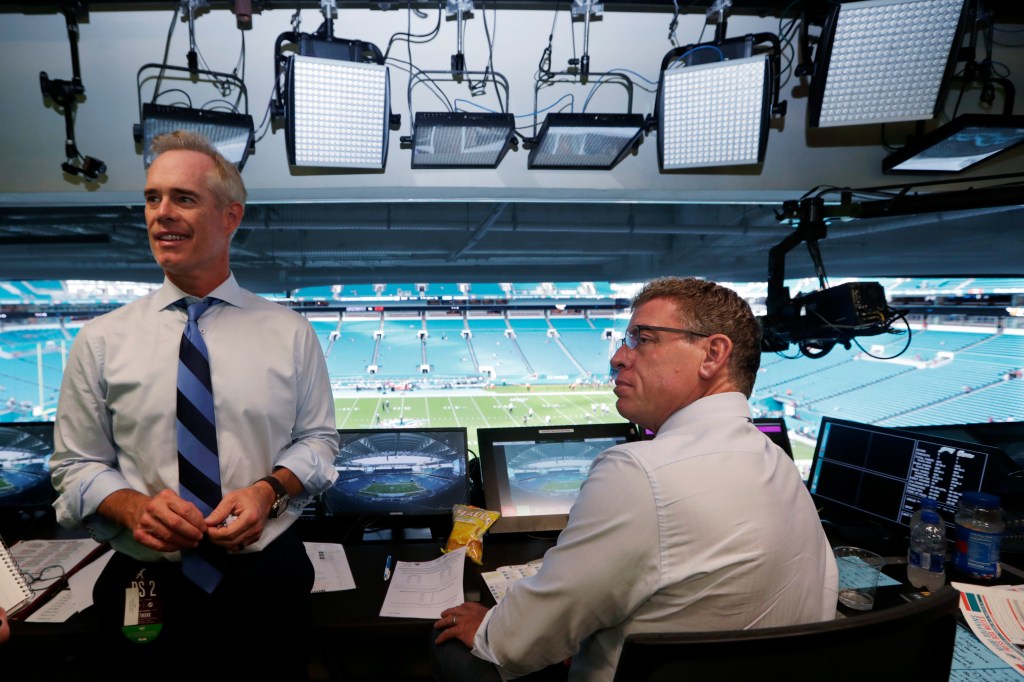 There was no repudiation of Buck and Aikman since it didn’t matter to America if the sport had been called by Trudy, the cashier down at Ernie’s Luncheonette. Commentators can enhance or diminish telecasts, but they’ll’t force us to look at, not at $250 million or at 25 cents.

Will many watch Brady’s debut since it’s Brady? Probably. But a football game had higher be attached. After his first telecast, it’s over; the novelty can be kaput. He’ll be an insanely expensive ornament.

You and I do know this. We’ve at all times known it. TV execs? Not a clue. Obviously.

Within the meantime, football, the televised product, has never been more devoid of fundamental football sense. 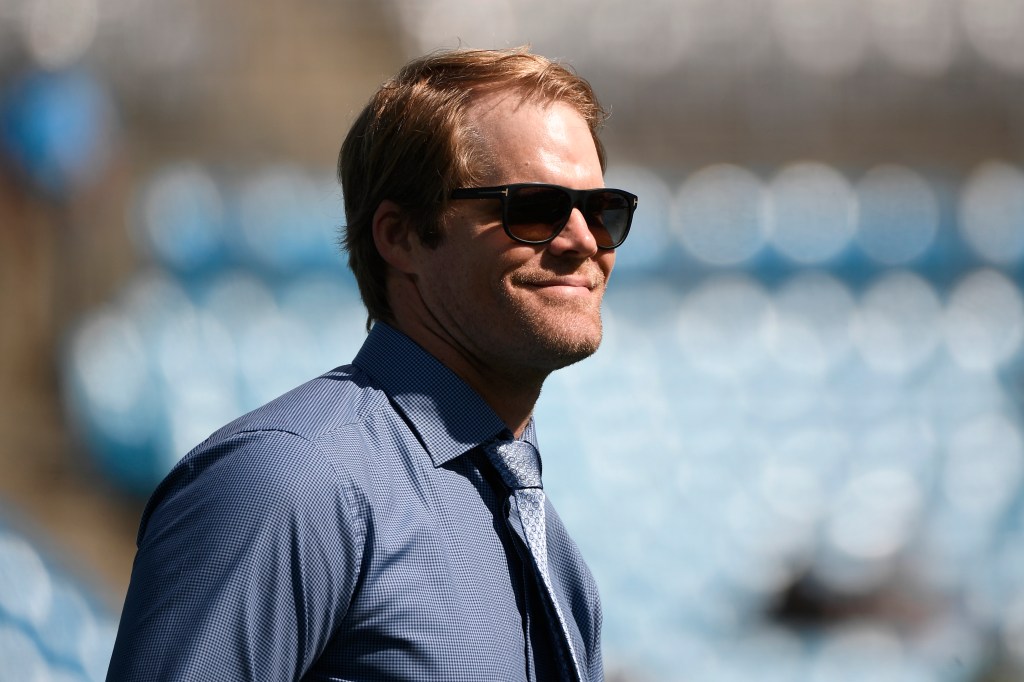 In a colossal waste of time, energy and money, Fox on Saturday, dispatched six pregame and halftime panelists to take a seat outdoors on the Michigan-Ohio State game, from where each spoke a barely discernible sentence. This was a prefabricated invitation to attend it out watching another game. Sensible!

ABC/ESPN’s Notre Dame-USC game was made right into a sensory mess by Kirk Herbstreit who figured we tuned in to listen to him speak infinite gridiron gibberish after every play in an try and impress only himself.

Within the second quarter of the Bears-Jets game Sunday on Fox, a fumbled snap on a field-goal try was knocked around several times. Whose ball was it? Great query! We came upon after a bunch of commercials, preceded by a crowd-shot shown in slow-motion, and thus became the last to know.

Then back to Daryl “Moose” Johnston who during that game decided to present one other all-game, non-stop seminar, often on how good defenses prevent opponents from scoring. Johnston could make them open the bar at an AA meeting.

Or do we now have this all incorrect? Had Buck and Aikman called Giants-Cowboys would the record audience have been even higher? And if Romo had called it could the number have been thousands and thousands more?

Whiffing on shots by Iran

That transparently political ambush of U.S. World Cup coach Gregg Berhalter and captain Tyler Adams by Iranian “journalists” — aka government setup men — was each aggravating and comical. The Iranian hit squad asked “questions” about American racism and even about U.S. inflation as pertinent to the U.S.-Iran match on Tuesday.

Adams, 23, did well, stayed calm, poised, respectful, but unapologetic for representing our country.

Berhalter, who seems to represent the Kingdom of Nike and treats 1-0 leads as in the event that they’re insurmountable, whiffed. He actually asked forgiveness for the temporary removal of the Islamic Republic seal from Iran’s flag by U.S. Soccer as a show of support for the murderously oppressed women of Iran. 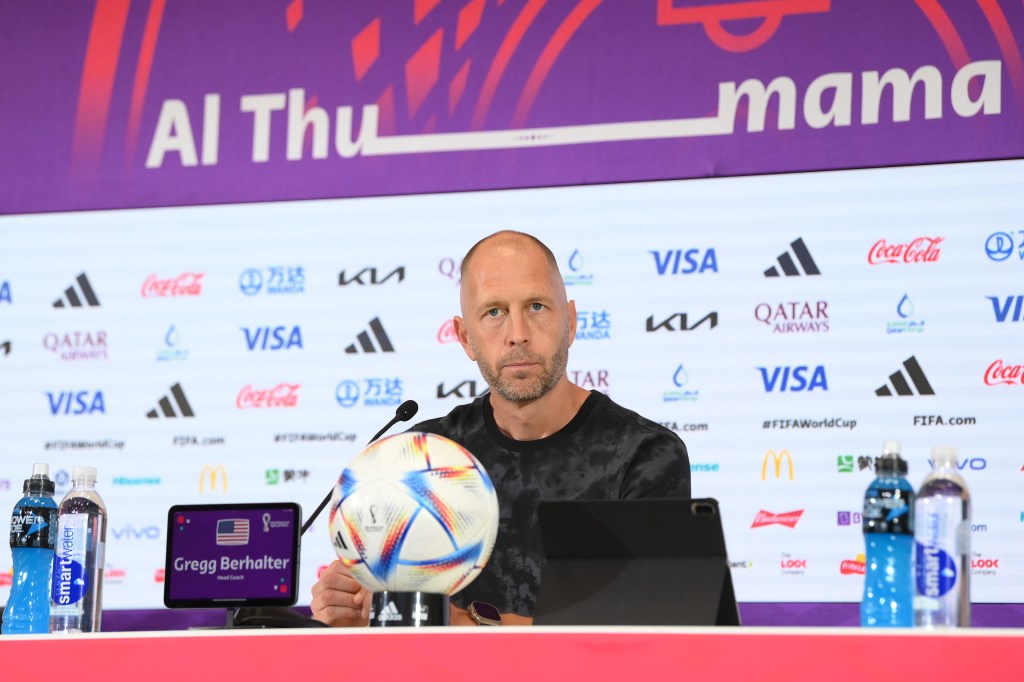 Gregg Berhalter speaks to the media on the World Cup. FIFA via Getty Images

“All we are able to do is apologize on behalf of the players and the staff,” he said. He must have said something along the lines of either, “I feel you realize the rationale” or “Wander away.”

He could have pointed to the U.S. roster comprised of blacks, whites, Hispanics, immigrants, then asked the correspondents from the Iranian “free” media if that meets with their definition of racism.

Not that Berhalter could possibly be expected to be versed in such matters, but he might’ve asked in return: “How are you going to, representatives of the Islamic Republic of Iran, ask questions on American racism?

“Where did the a whole bunch of 1000’s of Persian/Iranian Christians and Jews go after it was made threateningly clear that after centuries they were not welcomed to breathe within the Islamic Republic of Iran?”

Finally, why not ask if the protection of the Iranian players and their families are assured after protesting the sustained degradation of Iranian women and their life-risking demand for probably the most basic of human rights? Will they be eliminated from view? Beheaded or merely imprisoned by the Ayatollahs?

Berhalter might’ve added, “Don’t you guys all have moms?”

What’s the difference between unselfish and silly? Monday on TNT, Shaq O’Neal and his “highlights” team presented an amusing indictment on how NBA games have been lost to 3-point heaves.

In an uncontested 140-105 win over the Hornets, the Celtics’ Derrick White had an all-alone, running layup or jam for the best of two points. But as White neared the rim — not a defender in sight — he threw the ball out to a teammate who was loitering in 3-point land.

It was ridiculous. And Charles Barkley’s three-word response — “Come on, man!” — nailed it.

The NFL’s TV-money “flex” season is here, a time when paying customers — baited-and-switched suckers — can freeze at a game, arrive home at 1 a.m. and otherwise go to hell. Remember what Roger Goodell said, “It’s all about our fans.” In Maryland’s 37-0 win over Rutgers last Saturday, 4 minutes were left when the Terrapins continued to throw into the tip zone. Why just blow them out when you possibly can humiliate them? On BTN, Jason Ross and Matt McGloin said nothing about it, not a peep.

Memo to Fox’s Kevin Burkhardt: Stop the hollering. You’re too good for that.

The one thing the Giants’ ownership and management must sacrifice with the intention to even reconsider Odell Beckham Jr. is their dignity.

We lost comedian Freddie Roman this week at age 85. Freddie was a soft touch, especially at sports-related fundraisers. He’d gladly do 20 minutes of great stuff, his treat. Making people laugh was not only his job and gift, it was his pleasure.