Francis X. Clines, Lyrical Author for The Times, Dies at 84 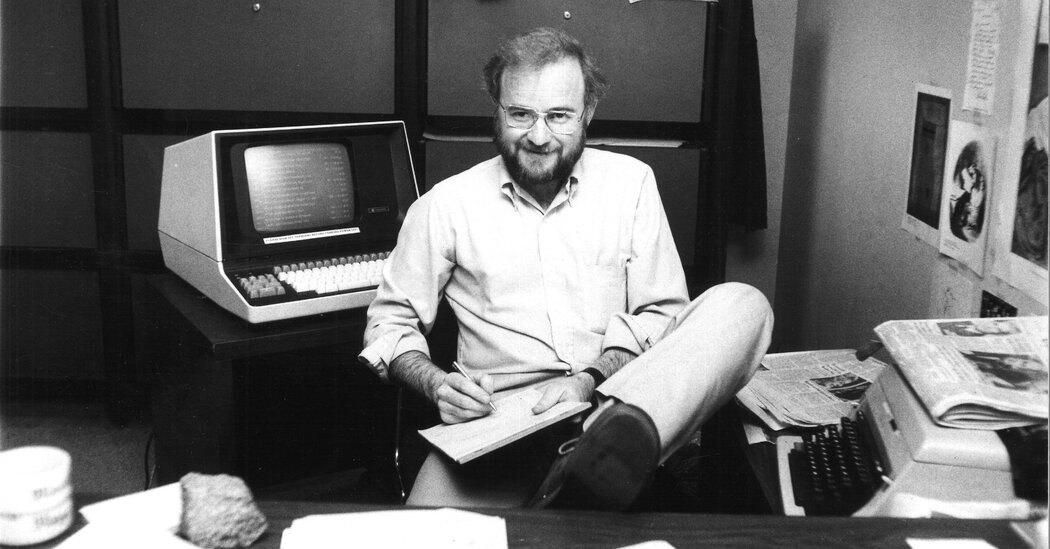 Francis X. Clines, a reporter, columnist and foreign correspondent for The Recent York Times whose commentaries on the news and lyrical profiles of extraordinary Recent Yorkers were widely admired as a trendy, literary type of journalism, died on Sunday at his home in Manhattan. He was 84.

His wife, Alison Mitchell, a senior editor and former assistant managing editor at The Times, said the cause was esophageal cancer, which was diagnosed in February 2021.

To generations of Times colleagues, Mr. Clines was an almost ideal reporter: a keen observer, a tenacious fact-finder and a paragon of integrity and fairness who could write gracefully against a deadline. He resisted praise with a shrug or a little bit of self-deprecating deadpan.

He worked his entire 59-year profession for The Times (1958-2017), starting as a duplicate boy with out a college degree or formal journalism training. After years as a political reporter at Recent York’s City Hall, the Statehouse in Albany and the Reagan White House, he corresponded from London, the Middle East, Northern Ireland and Moscow, where he covered the last days of the Soviet Union.

As a national correspondent later, he tracked political campaigns and the Washington scene, taking occasional trips through the hills and hollows of Appalachia to jot down of a largely hidden Other America. And for nearly 20 years before retiring, he produced editorials and “Editorial Observer” columns hailing labor and social progressives, and lambasting the gun lobby and Donald J. Trump.

Mr. Clines established his status as a literary stylist with “About Recent York,” a long-running column begun by the Pulitzer Prize-winning reporter Meyer (Mike) Berger, who died in 1959. Certainly one of several Berger successors, Mr. Clines wrote the column from 1976 to 1979. Though occasionally about news-related events, his column was mostly dedicated to vivid portraits of Recent Yorkers — the wealthy and the poor, the influential and the forgotten.

He called them sketches of town. They were factual profiles overlaid along with his observations and literary allusions, often humanistic in tone and quite personal, like a brother’s letters home about extraordinary people he had met.

“Tomorrow is Alice Matthew’s birthday,” Mr. Clines wrote in a typical vein on Oct. 6, 1976, “and in case you ask politely she is going to let you know about her 93 years, from the time she saw the dappled firehorse that led to her elopement from Indiana 74 years ago, to the night here in her welfare room where she saw the spirit of Louis XIV, and he had his beautiful white horse lay his head on the counterpane of the bedridden woman to comfort her.”

“None of those stories is gloomy,” he went on. “Mrs. Matthews sees to that. She represents a small drain on town Human Resources Administration budget. But she herself is a serious human resource of memory and good company who belongs as logically within the slick Big Apple ads concerning the city’s strengths as she does within the roach-infested room that she graces on the Hotel Earle off Washington Square.”

Mr. Clines wrote three 900-word “About Recent York” columns per week. He profiled a solitary Etruscan scholar pursuing his work from a single room in a “frugal West Side hotel,” and a shoe salesman who turned pages for concert pianists. He went to a racetrack with a wealthy landlord, spent an evening watching street prostitutes, and sometimes just listened to nighttime sounds after closing time on the Bronx Zoo. Once, he attended a Chinese funeral with an Italian band playing the dirge.

“Beyond a matter of life and death, the tableau represented a little bit of symbiosis in neighboring cultures of Chinatown and Little Italy thriving tightly about Canal Street in Manhattan,” he wrote. “So there was Carmine inside Bacigalupo’s assembling his men in front of Mr. Yee’s open coffin and giving a downbeat for such songs as ‘What a Friend We Have in Jesus,’ and a mild, airy tune from the old neighborhood, ‘Il Tuo Popolo’ (‘Your People’). The music looked as if it would soothe the mourners.”

On an evening of marauding crowds during a citywide blackout in 1977, Mr. Clines caught an uglier side of town: “The looters scattered, roachlike, in the complete morning sunlight, then stopped to observe overtly when the owner of Joe’s candy store showed up and saw his store disemboweled onto the Brownsville sidewalk. He let loose a furious howl.”

Mr. Clines’s columns won Columbia University’s Mike Berger Award in 1979, and the following yr one of the best of them were collected in a book, “About Recent York.”

As a London-based correspondent from 1986 to 1989, he covered British politics, arts and general news, but in addition traveled to breaking news on the Continent, within the Middle East and in Northern Ireland, where gun battles and terrorist bombings referred to as “the Troubles” killed Protestants and Catholics with numbing regularity.

He followed up that posting with one in Moscow, from 1989 to 1992, when he helped cover the top of Mikhail S. Gorbachev’s presidency and the collapse of Soviet Communism.

Irrespective of where he was writing from, nevertheless, he delivered to his reporting the identical observant eye and finely attuned ear. From Belfast in 1988, for instance, he wrote of a bit of girl surrounded by death:

“Beyond the coffin, out within the churchyard, red-haired Kathleen Quinn was stuffed with fun and flirting shamelessly for all her eight years of life. ‘Mister, I’m to be on the TV tonight,’ she told a stranger, squinting up comfortable and prim. Kathleen had taken her brother’s bike and skinned her knee bloody, all while people were praying goodbye contained in the church to a different rebel body in one other coffin.

“Because it turned out, the tv ignored Kathleen and missed a classic Irish truth, a sight for sore eyes. She climbed back on the bike and headed off in a blur, oblivious of a bit of nearby graffiti that seemed all about life’s withering dangers: ‘I’m wondering each night what the monster will do to me tomorrow.’”

Francis Xavier Clines was born in Brooklyn on Feb. 7, 1938, the youngest of three children of an accountant, Francis A. Clines, and Mary Ellen (Lenihan) Clines. The boy, called Frank, and his sisters, Eileen and Peggy, grew up within the Bay Ridge neighborhood of Brooklyn.

Frank attended the all-boys St. Francis Preparatory School, then within the Williamsburg section, where he graduated first in his class of 1956. He was a Brooklyn Dodgers fan and a voracious reader of novels, biographies, history and poetry. He enrolled at Fordham University but soon dropped out before serving two years within the Army.

After his discharge, he applied for a job at The Times and was hired largely on the strength of an essay he submitted detailing his hopes for a journalism profession. After a yr of clerical work, he wrote radio news bulletins for WQXR, The Times’s AM and FM stations, then covered the police beat and general assignments.

Along with Ms. Mitchell, he’s survived by his first wife; 4 children from his first marriage, John, Kevin, Michael and Laura Clines; and a sister, Eileen Lawrence. One other sister, Peggy Meehan Simon, died.

There are a lot of ways to deflate pomposity, which is one reason Mr. Clines relished covering the State Legislature in Albany. Beyond the drumbeat of recent laws and proposed taxes, he dissected the mores of lesser-light legislators with a Celtic sense of the absurd: their overblown rhetoric about public service, their crude eating habits during debates, their losing bouts with the mother tongue — all were fair game and duly reported.

“I feel he was one of the best newspaper author of our time,” Charles Kaiser, a former Times reporter, said in a recent email. “His success said more concerning the paper’s commitment to beautiful writing than the rest could.”

Mr. Clines once wrote a column on Seamus Heaney, the Irish poet, that may need been a form of self-revelation, saying: “He fights to maintain things basic, to remind himself of the easy wisdom of Finn MacCool, Ireland’s mythic national hero, that one of the best music on this planet is the music of what happens. In his ‘Elegy,’ dedicated to Lowell, Heaney reminded himself:

‘The best way we live,

Can have been our life.’”