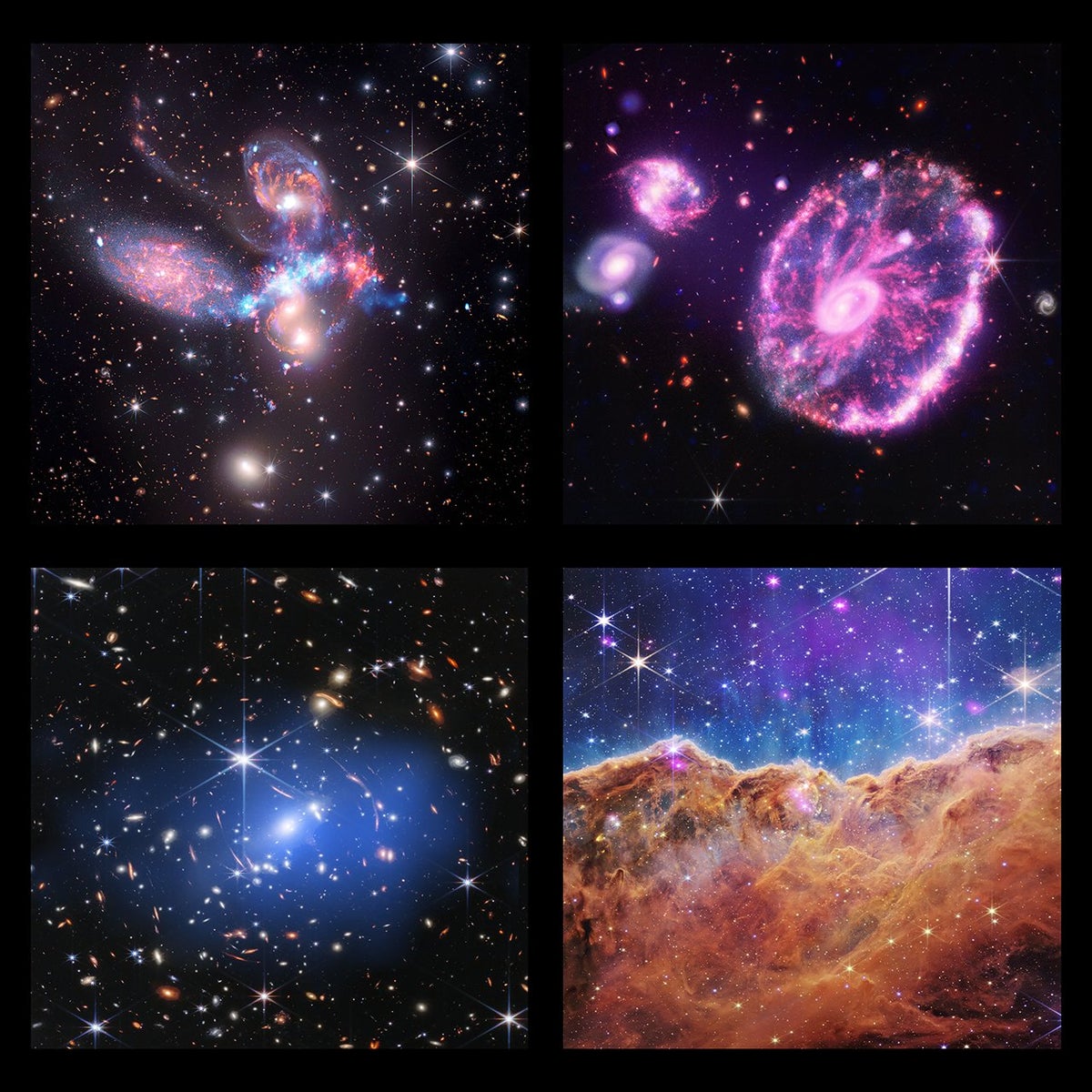 The James Webb Space Telescope is attuned only to infrared light, but that doesn’t mean it may possibly’t see the broader sky with slightly help from its friends.

Chandra X-ray Observatory is Nasa’s X-ray light space telescope, and scientists have now combined its X-ray observations of a number of the first, iconic images taken by the Webb Telescope. The outcomes are an infusion of luminous purples and blues within the already polychromatic Webb images, and an enhancement of detail that helps scientists to learn more in regards to the deep space objects which can be the topics of each space telescopes.

Nasa recently released images combining Webb and Chandra observations of Stephan’s Quintet, the Cartwheel galaxy, the Carina Nebula, and the galaxy cluster SMACS J0723. The Chandra Observatory account on the social media platform Twitter shared the pictures of all 4 on Tuesday.

Stephan’s Quintet is a set of 4 galaxies in close proximity about 290 million light years from Earth, and a fifth at a special distance that appears to hitch them of their gravity-driven dance. The group of galaxies was among the many first Webb images released to the general public on 14 July.

The primary Webb Telescope image of Stephan’s Quintet, a set of 5 galaxies greater than 250 million light years from Earth

The addition of Chandra’s X-ray vision revealed a shiny diagonal path of blue amidst the galaxies, and blue bands across the spiral arms of the galaxies, revealing areas of star formation and violent interaction between them, based on a Chandra Observatory blog post.

This image of the group of galaxies generally known as Stephen’s Quintet was created by combining infrared light observations by the James Webb Space Telescope with X-ray light observations from the Chandra X-ray Observatory, revealing latest details

“The Chandra data (light blue) of this method has uncovered a shock wave that heats gas to tens of tens of millions of degrees, as one among the galaxies passes through the others at speeds of around 2 million miles per hour,” the post reads.

The combined image of the Cartwheel Galaxy, some 500 million light years from Earth, glows in luminous purple due to the addition of Chandra’s X-ray sight, which highlights, “superheated gas, individual exploded stars, and neutron stars and black holes pulling material from companion stars,” based on the Chandra observatory website.

The Cartwheel Galaxy, some 500 million light years from Earth, glows a luminous purple on this image made by combining observations of each the Chandra X-ray Observatory and the James Webb Space Telescope.

SMACS J0723 is a cluster of galaxies greater than 4 billion light years from Earth, and was one among the primary Webb images released in July. The combined image shows a blue aura across the cluster, an enormous reservoir of gas seen glowing in X-ray light by the Chandra Observatory.

“On this image, the Chandra data (blue) reveals gas with temperatures of tens of tens of millions of degrees, possessing a complete mass of about 100 trillion times that of the Sun, several times higher than the mass of all of the galaxies within the cluster,” the Chandra website reads.

The fourth composite image is one of the stunning of the primary Webb images to be released, the “cosmic cliffs” of the Carina Nebula, found 7,600 light years from Earth.

The brand new Webb-Chandra composite image highlights younger stars within the cosmic cliffs, which glow brighter in X-ray light, based on the Chandra Observatory website.

The brand new images usually are not the one Webb telescope team up. The Hubble Space Telescope and Webb Telescope teams recently combined forces to create a composite image of a distant galaxy pair using Webb’s infrared vision and the ultraviolet light sensitivities of the venerable Hubble.

Webb was never meant to explore the cosmos solo, based on the Chandra Observatory website, and these team-ups with Chandra and Hubble are “underscoring how the facility of any of those telescopes is simply enhanced when joined with others.”