Get set to hitch the jet set: How odd mortals can money in on the motion in flashy Mykonos 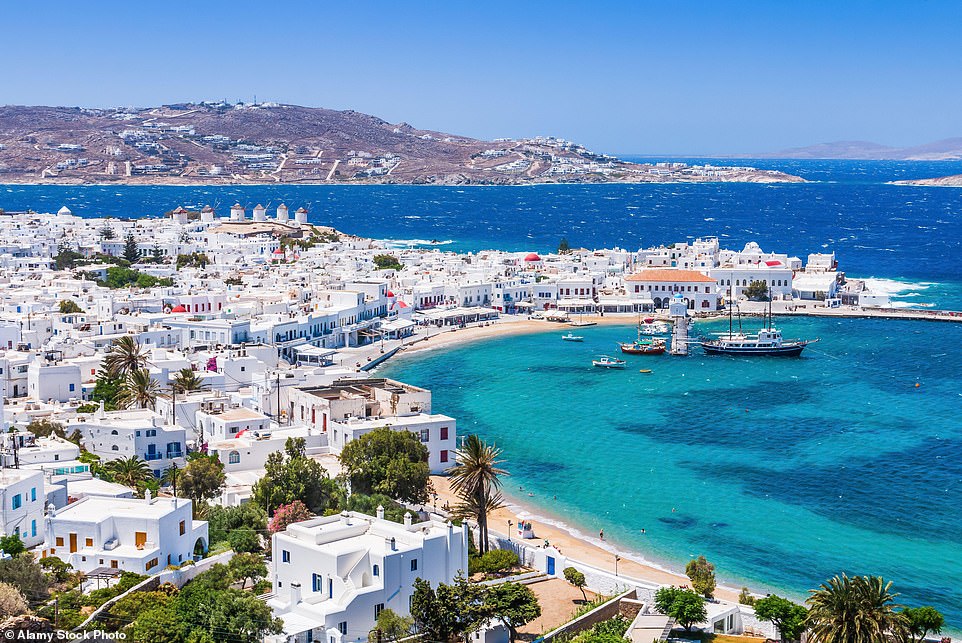 The sun is thrashing down on Super Paradise Beach and gym-sculpted bodies are sizzling on neatly placed loungers.

At Paraj, a recent restaurant overlooking this coveted spot — open for just five days before my visit just a few weeks ago — 100g tins of Iranian caviar are being sold for £1,030 apiece, while a small shaving of Australian black truffles could be sprinkled over your lunch for £107. To drink? Perhaps a Methuselah — eight bottles in a single — of the French rosé Chateau Romassan, a snip at £2,230. That’s if it’s drunk in any respect: plenty of tourists, including fallen BHS tycoon Philip Green, come to the island’s beach clubs to spray champagne over fellow dancers like Formula One stars on the victory podium.

The diminutive Cycladic island of Mykonos (just 33 square miles) has all the time had a wild side. But lately it’s gone bonkers — all of the more reason, many say, to ascertain it out.

Mykonos Town, above, is probably the most touristy a part of the island and sees loads of cruise-ship custom. But it surely’s also intrinsically Cycladic, says Oliver, a warren of whitewashed houses and flagstoned streets studded with souvenir shops, bars and winsome restaurants 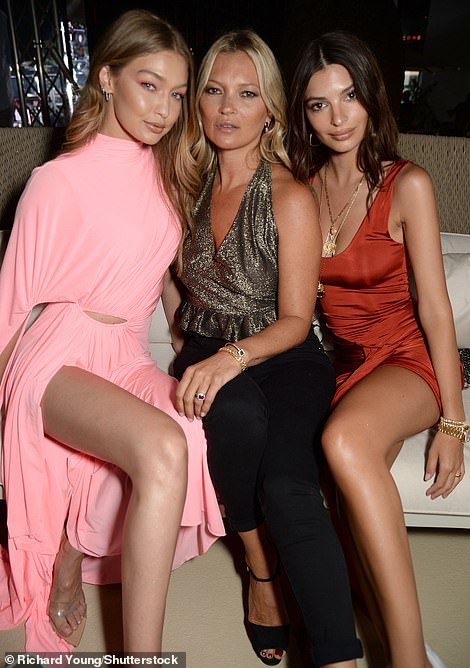 Supermodels Gigi Hadid, Kate Moss and Emily Ratajkowski are pictured here on the launch of the Nammos Village shopping center on Mykonos in 2018

The trend arguably began within the Nineteen Sixties, when Jackie Onassis, Marlon Brando and Grace Kelly were lured by the 300-plus days of annual sunshine. Brigitte Bardot pouted for pictures here wearing only a towel.

Before mass tourism, there have been only a few hotels, plus the island’s famous windmills. Today, 16 remain, largely built by the Venetians within the sixteenth century, with seven looming over the major town of Chora.

The smart set now hang around at Mykonos’s beach clubs — Super Paradise is one — chucking back Whispering Angel rosé and ordering platters of pricey seafood.

One afternoon, nonetheless, I meet Gill and Sheila, each from Warwick. These sprightly friends are of their 80s — and on their first trip abroad since Covid.

‘Take a look at the water!’ says Gill. ‘It’s like a millpond. It’s so wonderful to get away after spending so long cooped up at home. We haven’t been further than Southwold for 2 years.’

Mykonos Town (Chora is just the Greek word for ‘town’) is probably the most touristy a part of the island and sees loads of cruise-ship custom. But it surely’s also intrinsically Cycladic: a warren of whitewashed houses and flagstoned streets studded with souvenir shops, bars and winsome restaurants.

This summer guarantees to be a vintage season. The beach clubs and restaurants are putting in extra orders of wagyu beef, king crab and champagne.

Many places — not least a few of the buildings within the major town — are being given a fresh lick of paint. And since they cost about €150 per day, I hope the mahogany sun loungers at Nammos — perhaps the island’s most over-the-top beach club, a favorite of DiCaprio and Green — have been spruced up, too.

The Russians have typically been a vital Myconian market, but Moscow bookings have collapsed. One in every of Vladimir Putin’s largest yachts supposedly spent weeks moored off the coast here last summer. A waiter told me it was ‘the scale of an island’. 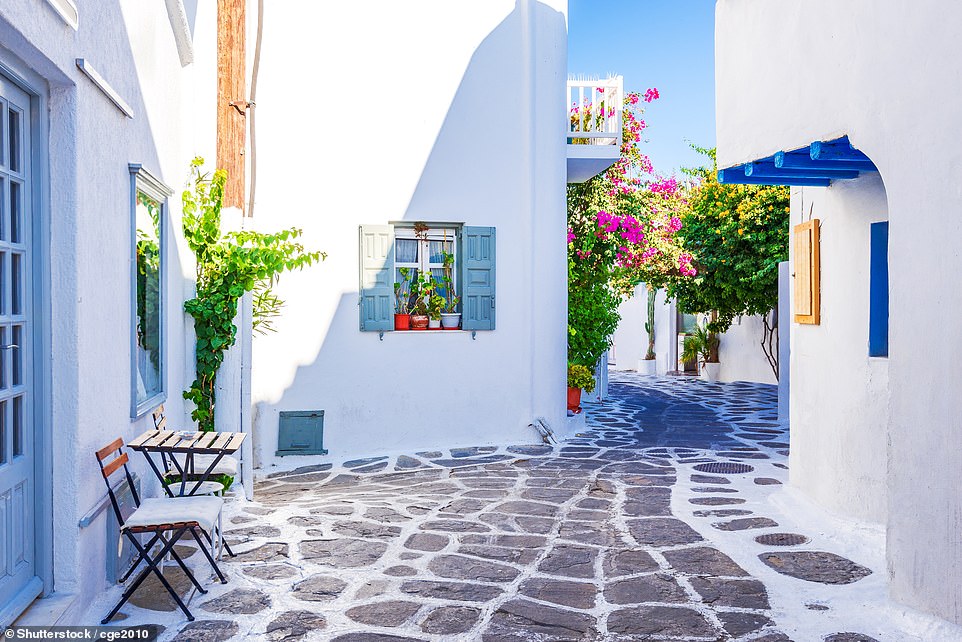 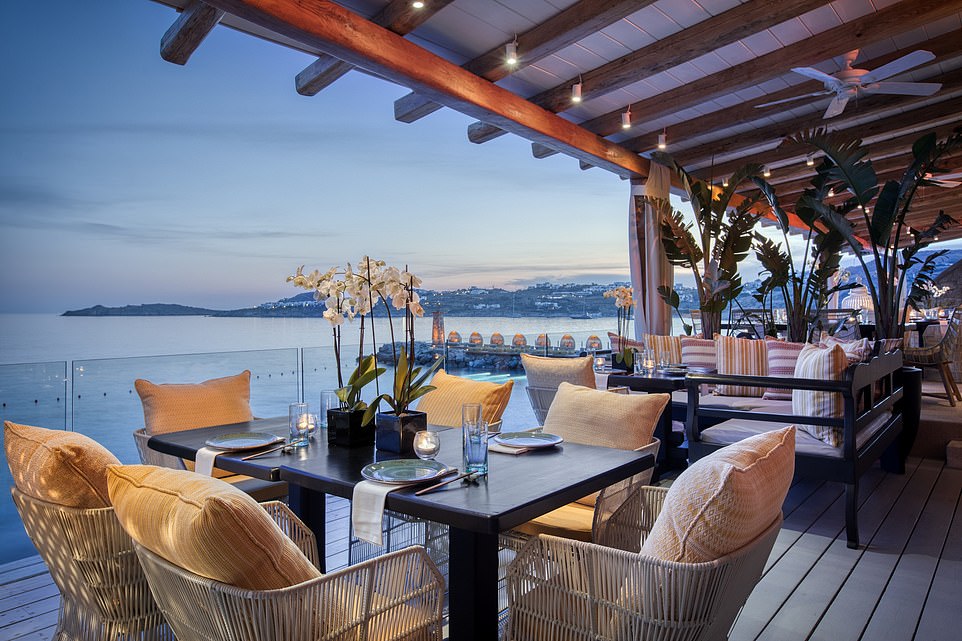 Hotel Santa Marina is the one hotel on Mykonos to have a non-public beach. It also has a energetic branch of Buddha Bar (above)

But spraying champagne isn’t everyone’s idea of fun — and that’s why a stay at Santa Marina, some ten minutes out of town, is well price considering. It’s the one hotel on Mykonos to have a non-public beach — so that you won’t be charged for a lounger.

The hotel began life because the private home of a Greek tycoon who bought a whole peninsula near Ornos Bay on the south of the island. Now it has 101 rooms and suites, plus, within the hills above the major hotel, 13 swanky villas.

There are two restaurants: Mykonos Social, run by the globe-trotting British chef Jason Atherton, and a energetic branch of Buddha Bar, the high-end pan-Asian chain with outlets in Monaco, Dubai, Abu Dhabi and Paris.

Because of the hotel, we roar along the Aegean someday in a rigid inflatable boat to Delos, the sacred island nearby, and troop across the 3,000-year-old ruins. Then we eat sushi aboard a standard Greek kaiki, or sailing boat, and swim within the bracing sea.

The beach club Scorpios — open to all but now owned by the Soho House group — can also be looking good, playing chilled-out dance music and offering sunsets and shrimp and sea bass ceviche with lime and chilli.

On our final night, as we drink a cocktail in Chora’s ‘Little Venice’ — a row of bars mounted on stilts over the ocean and facing toward the sunset — three or 4 hefty waves crash on to our table and soak us and our neighbours. The waiters, versed in such things, mop up the flood with towels.

We follow this with dinner at Kadena, a stunning, well-priced harbour restaurant — for grilled sea bream with tabbouleh and peerless people-watching — and finish off with pistachio gelato from DaVinci just a few doors down.

Only an unexpected firework display from a superyacht moored beyond the harbour is a sudden reminder that that is, in spite of everything, a billionaire’s playground — though odd mortals like me can enjoy it, too.