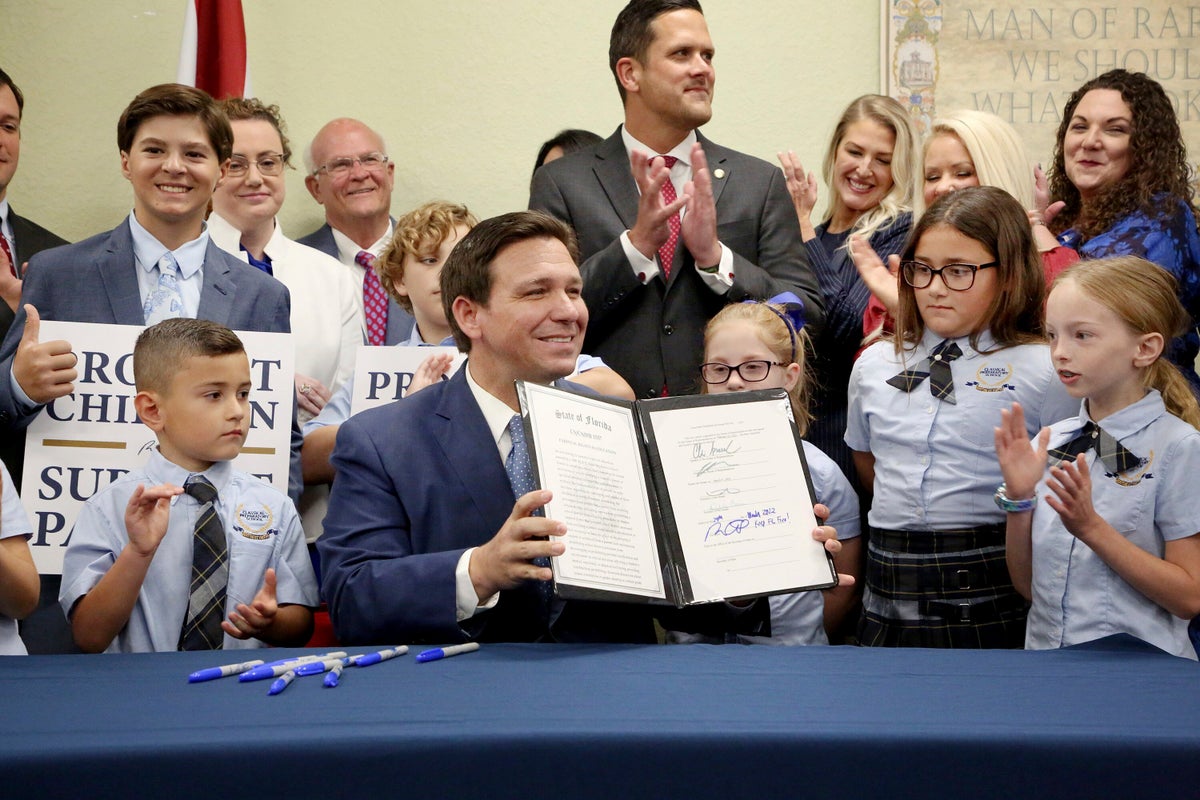 Hateful references to LGBT+ people and their allies exploded on social media platforms following Florida’s passage of what opponents have called the “Don’t Say Gay” law, while online networks have did not combat surging homophobic and transphobic attacks, in accordance with a report.

Research from the Human Rights Campaign and the Center for Countering Digital Hate found that using slurs like “groomer” and “pedophile” surged by greater than 400 per cent throughout the month after the bill was signed into law, which broadly prohibits classroom instruction on sexual orientation and gender identity and will open schools to lawsuits geared toward chilling classroom speech amongst LGBT+ students and teachers, opponents have argued.

From March into May, hateful posts spiked from a mean of 1,307 a day to greater than 6,600, in accordance with the report.

The five hundred most-viewed tweets mentioning “grooming” were viewed greater than 72 million times between January and July, with a handful of right-wing officials and influencers driving a bulk of the views, whether in posts of their very own or amplifying posts from others on their platforms, in accordance with the report.

Posts from members of Congress and influential accounts like Libs of Tik Tok and users like Jack Posobeic drove 66 per cent of impressions for the five hundred most-viewed “grooming” posts on Twitter, accounting for nearly 50 million views.

Christina Pushaw, press secretary for Florida Governor Ron DeSantis, announced on 4 March that the Parental Rights in Education Act must be described as an “anti-grooming” bill and suggested that its opponents re “probably” groomers or “don’t denounce” grooming young children.

Her post was viewed roughly 2 million views and was a “key inflection point within the utilization of the terms connected with ‘grooming’ alongside mentions of the bill and more broadly,” in accordance with the report.

In a press release to the Associated Press, Ms Pushaw said that “there are groomers of all sexual orientations and gender identities” and that her posts “didn’t mention LGBTQ people in any respect.”

Spikes in grooming-related posts also followed a Fox News segment claiming that “liberals are sexually grooming elementary students” and a segment on far-right network Real America’s Voice by which US Rep Marjorie Taylor Green called the Democratic Party the “party of pedophiles”, the report found.

Following a viral speech within the Michigan Senate from state lawmaker Mallor McMorrow, by which she condemned accusations of “grooming” from her Republican colleague Lana Theis, day by day mentions peaked at 53,353 .

Within the week after Twitter announced in July that calling transgender and nonbinary people “groomers” violates its policies on hate speech, posts mentioning the word averaged 8,075 a day, the report found.

The report follows findings reported by The Independent in April that trace the weaponisation of “grooming” from message boards that foster anti-LGBT+ rhetoric to its use amongst popular far-right personalities and media figures, while Republican elected officials and their staff characterised opposition to their “anti-grooming” agenda as “pro-paedophile”.

Researchers also reported that 59 ads across Facebook and Instagram “that promote the untruthful and dangerous narrative that the LGBTQ+ community and its allies are ‘grooming’ children” – totaling nearly $25,000 in Meta’s ad revenue for posts viewed greater than 2.1 million times, in accordance with the report.

Thirty-two of those ads, which received most of those impressions, focused “grooming” accusations against the Walt Disney Company after company leadership announced their opposition to the “Don’t Say Gay” bill.

The ads “clearly promote discriminatory stereotypes against members of the LGBTQ+ community by branding them with untruthful accusations of grooming and pedophilia in addition to targeting them with hateful slurs like ‘predator’ and ‘perver’” despite the corporate’s policies against discriminatory language, in accordance with the report.

“We’re in the course of a growing wave of hate and demonization targeting LGBTQ+ people – often distributed digitally by opportunistic politicians and so-called ‘influencers’ for private gain,” Imran Ahmed, CEO of the Center for Countering Digital Hate, said in a press release accompanying the report.

“Online hate and lies reflect and reinforce offline violence and hate. The normalization of anti-LGBTQ+ narratives in digital spaces puts LGBTQ+ people in peril,” he said.