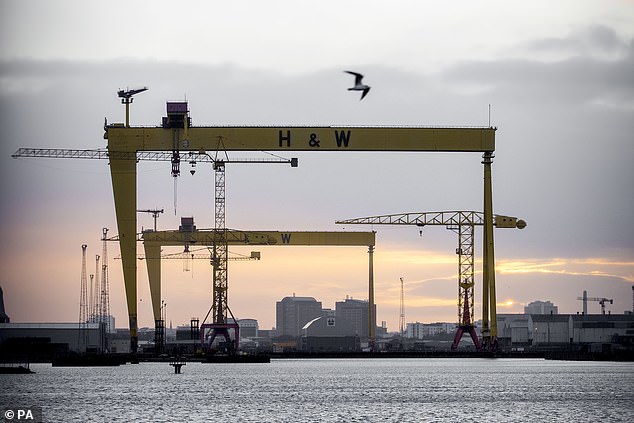 Harland & Wolff shares tumbled by greater than a fifth on Friday after the Belfast-based shipbuilder lowered its annual revenue guidance.

The AIM-listed company told investors it had been unable to complete ‘certain key workstreams’ on a Ministry of Defence contract during recent months because some manufacturing parts were briefly supply.

In consequence, it has deferred around £20million of revenues to the primary half of 2023, meaning sales of between £29million and £31million are expected for this yr as an alternative of £65million to £75million as previously forecast.

In July, the business won a contract from the MoD on behalf of the Lithuanian Defence Materiel Agency value £55million, its first-ever defence sector contract, to regenerate a former Royal Navy mine-hunting vessel.

This deal is ready to create 100 recent positions on the group’s Appledore shipyard in Devon and is as a consequence of be accomplished inside 18 months to 2 years.

Harland & Wolff insisted the M55 project was still ‘heading in the right direction and in keeping with the bottom redelivery schedule for the vessel.’

When trading closed early on Friday, Harland & Wolff Group Holdings shares were 20.6 per cent, or 4.15p, lower at 16p, making it one in all the five biggest fallers on the AIM Index.

The shipbuilder also announced today that a variety of cruise and ferry industry clients had deferred their contracts into 2023 as a consequence of rising inflation and political uncertainty.

As well as, it has agreed with Italian multinational oilfield services company Saipem to terminate a contract involving the manufacture of 4 wind turbine generator jackets for the NNG offshore wind project off the Scottish coast.

Harland & Wolff was initially given the contract in April 2021 but has struggled with payment problems, delays and defective materials.

‘The corporate has due to this fact determined that continuing with the project might be sub-economic from a goal margin perspective and would, due to this fact, not be in one of the best interests of the group.’

As a substitute, the firm will deal with expanding work at its Methil site on the Firth of Forth estuary, where it’s targeting £10million in contracts and has significantly expanded the workforce.